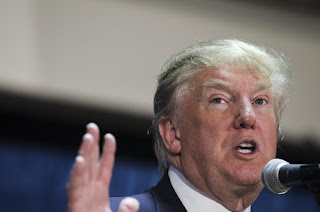 Ed. note. To its credit, the Washington Post recognized the Trump deportation plan for what it is.

Washington Post
By Editorial Board November 11
“WE HAVE a country that’s going to hell.” So pronounced Donald Trump, candidate for the Republican presidential nomination, at Tuesday night’s debate. If Mr. Trump thinks that now, it’s likely many Americans would come to agree with him were they to see the economic and social upheaval unleashed in carrying out his plan to forcibly deport more than 11 million undocumented immigrants, a major portion of whom are employed, have lived in the United States 15 years or more and have children and other relatives who are U.S. citizens.
Mr. Trump, who has stirred up so much enthusiasm for mass deportations, is now offering what he evidently regards as an exemplary template: the far more modest but still massively cruel round-’em-up-and-throw-’em-out program carried out, mainly in the summer of 1954, under the administration of President Dwight D. Eisenhower.
Ed. note. As we argued on Sept 1, Trump is Dangerous.
http://antiracismdsa.blogspot.com/2015/09/trump-is-dangerous.html


Mr. Trump did not utter the name given to the program at the time, Operation Wetback, which surely qualifies as a racist slur even in his PC-loathing vernacular. Still, wielding his special brand of peremptory logic, Mr. Trump said Tuesday that he would deport millions of undocumented immigrants because “we have no choice.”
In September, speaking to CBS News, Mr. Trump lauded Operatio n Wetback and suggested his own plan would be painless. “We are rounding them up in a very humane way, in a very nice way, and they’re going to be happy because they want to be legalized.”
In fact, his view is grotesquely ahistorical. The deportations in 1954 probably didn’t amount to more than a few hundred thousand, though Mr. Trump said they “moved 1.5 million illegal immigrants out of this country.” Even his wildly exaggerated figure is a fraction of the estimated 11 million undocumented immigrants now in the United States, who have much deeper roots, and live in communities far more geographically scattered, than their mid-century counterparts.

Moreover, the deportations in the 1950s took place with the active collaboration of the Mexican government, which wanted to repatriate a major supply of cheap labor that had migrated north. It is Trumpian fantasy run amok to imagine that Mexican authorities today would be so cooperative in an undertaking that would be seen as inhumane and, given the importance of remittances, economically disadvantageous.
Perhaps most salient, Operation Wetback was a disgraceful episode that involved inhumane treatment of Mexican migrants, an unknown number of whom died or were sickened by being forcibly relocated and in many cases deposited in sweltering, remote locations with little food or water. One observer depicted “indescribable scenes of human misery and tragedy.” A historian compared the forced journeys to that of an 18th-century slave ship.
What little sense entered the GOP debate on this issue came from Ohio Gov. John Kasich, who called advocacy of mass deportations “silly” and juvenile, and former Florida governor Jeb Bush, who put his finger on the problem precisely. “It’s not embracing American values,” Mr. Bush said. “And it would tear communities apart, and it would send a signal that we’re not the kind of country that I know America is.”
Read more about this topic: