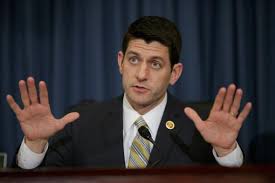 WASHINGTON — Speaker Paul D. Ryan said in a series of televised interviews on Sunday that he would not work with the Obama administration on changing immigration policy, effectively pushing off the issue to at least 2017.
“Look, I think it would be a ridiculous notion to try and work on an issue like this with a president we simply cannot trust on this issue,” Mr. Ryan, Republican of Wisconsin, said in an interview with CBS’s “Face the Nation.” “He tried to go it alone, circumventing the legislative process with his executive orders, so that is not in the cards.”
The message from Mr. Ryan, who was elected speaker on Thursday, signaled an antagonism toward the White House that both echoed his predecessor, John A. Boehner, and is likely to appeal to the party conservatives who forced Mr. Boehner’s resignation.
Mr. Ryan taped five Sunday morning news shows, in which he laid out his agenda for unifying his party and his approach to relationships with congressional colleagues, Mr. Obama and Republican presidential candidates.


When asked to comment on the statements about immigration, a White House spokesman referred to a news briefing Friday by Josh Earnest, the press secretary, who described the speaker’s stance as “a source of deep disappointment.”
Mr. Ryan said that if the Republicans were to be a successful opposition party between now and the presidential election, they would need to become an aggressive “proposition party,” laying out a clear policy vision with alternatives to Democrats, like plans for overhauling the tax code and replacing the Affordable Care Act.


All of this explains why many immigration-reform advocates
have shifted their energy away from Congress. Frank Sharry, executive
director of the advocacy group America’s Voice, warns
that a legislative victory may be far, far away. “GOP resistance to
immigration reform, which has gotten more tenacious and more
obviously race-based, suggests that this isn’t a matter of policy or
politics; it’s a matter of white identity versus equality for demographically
diverse Americans,” he concludes. That puts the onus
on a Democratic president to drive aggressive reform, and a new
public debate, from the White House and the executive branch.
“We need to make sure that people understand that these are
political games being played with our lives,” Villalpando says.


“And passing policy in Congress is not the only solution.”
Posted by Duane Campbell at 9:02 PM