Join the May Day Strike in Sacramento 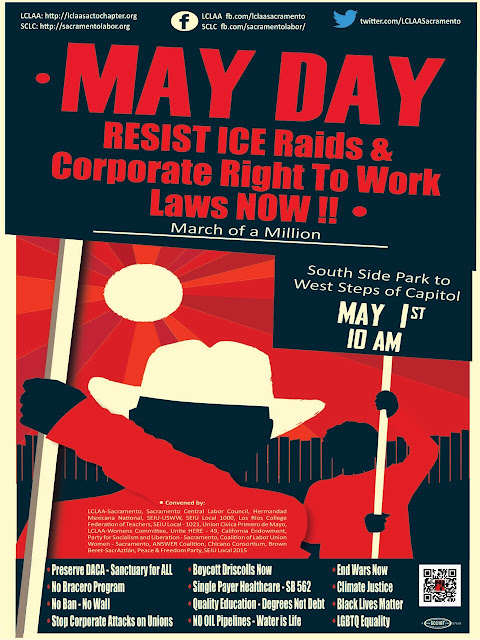 Posted by Duane Campbell at 7:58 PM No comments:

Support the Workers'/Students' Strike on May Day 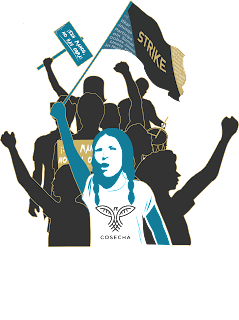 Cosecha, Immigrant Rights Organizations, Workers Centers and several unions  have launched  a  national strike billed as a “day without immigrants” to demonstrate that the country depends on the labor of immigrants and working class.  Thousands of students and  workers have already pledged to strike in what organizers expect to be the largest national strike since the Megamarches of 2006.

Join with DSA and this growing movement to strike on May 1. Don’t be left behind.  Organizers from Moviemento Cosecha have said that more than 400,000 workers have committed to strike. See story here http://inthesetimes.com/working/entry/20071/the_upcoming_may_day_strike_could_be_the_biggest_in_over_a_decade

As the strike day approaches the presidents of the Almagamated Transit Union, the Communications Workers of America, the Nation Nurses United, and the United Electrical Workers  have urged their members to participate in the strikes, boycotts and protests in an outreach piece organized by Labor for Our Revolution.

We encourage DSA chapters, students and unions  to join in the massive strikes, boycotts, and other actions beginning on May 1. The movement will continue after May 1.  Information on the post May 1 events is at www.lahuelga.com

Do you have a right to strike?
Can workers strike for political issues ?
What actions can workers at risk of retaliation take to protect themselves?
In the lead up to the March Day Without Immigrants, the Centro de Trabajadores Unidos en Lucha (CTUL) suggested that their members who wanted to participate should take these  precautions to mitigate their risks:
1  Tell your employer, in writing, your reason for striking
2  Make sure the reason is directly related to your workplace
Inform your employer that you will be back at work on your first workday after the strike.
3. Send the message as a text and keep a copy of the text as evidence.
If you are a member of a union, discuss your strike plans first with your union representative. See a detailed description of your right to strike and how to protect yourself here. https://talkingunion.wordpress.com/2017/02/24/immigrants-strike-by-the-thousands/

Cosecha is a new nonviolent movement fighting for permanent protection, dignity, and respect for the 11 million undocumented immigrants in the United States. Their name, "harvest" in Spanish, honors the long tradition of farmworker organizing and the present-day pain of the thousands of undocumented workers whose labor continues to feed the country. Committed to winning real victories for their community, Cosecha believes in using non-cooperation to leverage the power of immigrant labor and consumption and force a meaningful shift in public opinion.
Read more »
Posted by Duane Campbell at 4:19 PM No comments:

Locked Up: The Long Wait Of Immigration Detention, Part 2

Posted by Duane Campbell at 1:15 PM No comments:

Choosing Democracy: The Coming May Day Strike May be the Biggest in ov...

Choosing Democracy: The Coming May Day Strike May be the Biggest in ov...: by Sarah Aziza, Working In These Times  This article was first  posted  by Waging Nonviolence. When 26-year-old Catalina Adorno hit ...
Posted by Duane Campbell at 9:18 PM No comments:

Posted by Duane Campbell at 9:31 AM No comments:

The Upcoming May Day Strike Could Be the Biggest In Over a Decade. Organizers Explain Why. - Working In These Times

The Upcoming May Day Strike Could Be the Biggest In Over a Decade. Organizers Explain Why. - Working In These Times
Posted by Duane Campbell at 8:25 PM No comments:

Posted by Duane Campbell at 8:39 AM No comments:

By Duane Campbell
In spite of the economic boon for the wealthy, working people in the U.S. have yet to receive a significant improvement in their standard of living for over 30 years.  At the same time, democratic forces are once again confronted with anti-immigrant campaigns- this time fostered and promoted by a president of the U.S.

As socialists, we stand with and among the U.S. working class in opposition to the rule of the transnational corporations and their exploitation of the economy and their despoliation of our lives, our society and our environment.

We are currently experiencing a major restructuring of the global economy directed by the transnational corporations to produce profits for their corporate owners. The impoverishment of the vast majority of people in pursuit of profits for a small minority has pushed millions to migrate in search of food, jobs, and security.  Global capitalism produces global migration. Along with wars NAFTA and other “Free Trade” deals each produce a new waves of migration.

Socialists support the rights of working people to organize, to form unions, and to protect their rights and to advance their interests. Unions have always been an important part of how socialists seek to make our economic justice principles come alive.  Working people - gathered together and exploited in the capitalist workplace-are well positioned to fight their common exploitation.
Read more »
Posted by Duane Campbell at 5:45 PM No comments:

THE SADNESS OF THE BORDER WALL

The Reality Check: THE SADNESS OF THE BORDER WALL
Posted by Duane Campbell at 5:20 PM No comments: 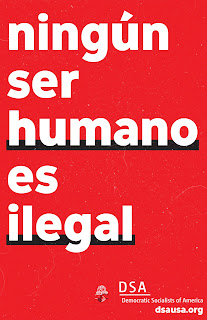 “A Day Without Immigrants” May Day Strike Announced
Over 400,000 Workers Commit to Strike in Press Conference with Immigrant Rights Organizations and Unions
Washington, DC - Immigrant Rights Organizations, Workers Centers and Unions launch a national strike billed as a “day without immigrants” to demonstrate that the country depends on the labor of immigrants and working class people of color. Hundreds of thousands of workers have already pledged to strike in what organizers expect to be the largest national strike since the Megamarches of 2006.
Speakers at the press conference included Erika Andiola as well as representatives of Movimiento Cosecha, the SEIU United Service Workers West, and the Food Chain Workers Alliance.
“May 1st is the first step in a series of strikes and boycotts that will change the conversation on immigration in the United States,” said Maria Fernanda Cabello, a spokesperson from Movimiento Cosecha. “We believe that when the country recognizes it depends on immigrant labor to function, we will win permanent protection from deportation for the 11 million undocumented immigrants; the right to travel freely to visit our loved ones abroad, and the right to be treated with dignity and respect. After years of broken promises, raids, driving in fear of being pulled over, not being able to bury our loved ones, Trump is just the final straw. As we saw during the spontaneous strikes on February 16th, our people are ready.”
Tens of thousands of members of the SEIU United Service Workers West have pledged to strike on May 1st, to demand an end to the criminalization of black and brown communities, an end to raids and deportations, and an end to worker exploitation. “The policies of the Trump administration are motivated by cruelty. They villainize black and brown people and call us rapists and violent criminals. They break apart immigrant families and separate parents from their children, and for no reason,” said Denise Solis, first vice-president of the SEIU USWW. “We are shutting it down on May 1st to stand up to these policies and show that most Americans don't support cruelty and racism.” High School and College students, as part of the Sanctuary Campus movement, will also be joining the May 1st Day Without Immigrants Strike with mass walkouts.

Read more »
Posted by Duane Campbell at 10:26 AM No comments:

Posted by Duane Campbell at 9:07 AM No comments: