Read more »
Posted by Duane Campbell at 6:21 PM No comments:

Posted by Duane Campbell at 11:27 AM No comments: 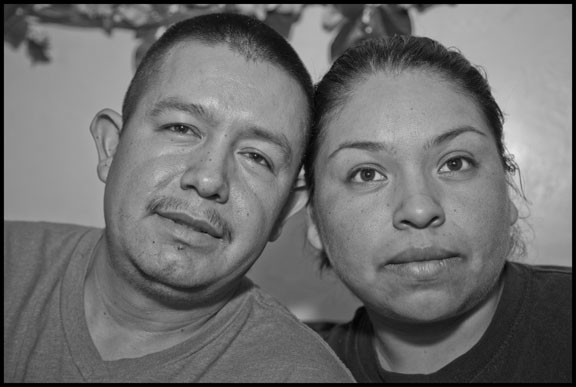 Read more »
Posted by Duane Campbell at 12:09 PM No comments: 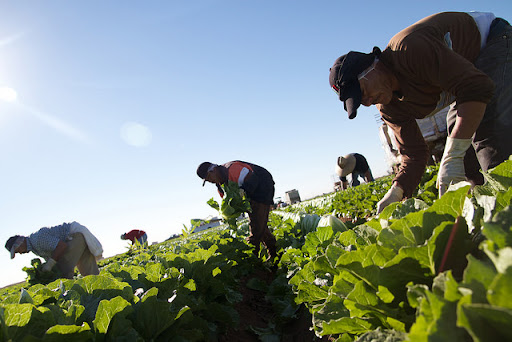 Farmworkers in Baja California, Mexico earned $7 to $8 per day—not hour—before the historic strike, making it even more difficult to walk off the job and forgo what little wages they earned., Peter Haden / Flickr / In These Times,

[Reprinted with permission from In These Times. All rights reserved.]

A historic farmworker uprising ignited this March in Baja California, Mexico. Thousands of crop pickers stopped work at peak harvest in the valley of San Quintin, a major source of the U.S.’s tomatoes, cucumbers and berries, demanding better pay, legally mandated benefits and an end to sexual harassment in the fields, among other improvements. The months-long movement received surprisingly little media attention on this side of the border—even though, according to a new documentary by Al Jazeera America, it is the first strike of this scale in Mexico in over a decade.

The short documentary, “Invisible Hands,” offers some of the first footage for U.S. audiences of the front lines of the uprising. It shows police crouching behind barriers to shoot rubber bullets at protestors; it shows hundreds of workers crowded outside negotiations with growers and government representatives in nighttime darkness, their backs turned to the police; most important, it shows what the men and women behind the protests endure to get produce to U.S. grocery stores.

Host Josh Rushing says, “It’s hard to understand how they could get by on the wages they’re paid here,” which were $7 to $8 per day—not hour—when the protests began. The workers interviewed in the documentary do barely get by. Ana, a raspberry picker who started working in the fields at age 12, now has children of her own to take care of. Even though she works at least six days a week, sunup to sundown, food is scarce. Her family can’t afford meat and often forgoes cereal, milk and cheese. “We only buy eggs, soup, rice, beans, the cheapest oil there is,” she says. They have no refrigerator—they can’t afford the electricity.

The workers’ poverty puts them in a weak bargaining position and makes walking off the job even more difficult. While the companies face lost profits, the workers face hunger. How long they can hold out without pay? “Invisible Hands” shows how the protestors’ militancy cannot keep their demands from plunging: they first demand almost $20 a day; the growers counteroffer with a raise of only about 50 cents. The workers return with a much lower proposal of $13 a day. But even that is too much for the growers. The protests all but ended this month with a mixed victory for the pickers: They have been promised government-required benefits and between $9.50 and $11.50 a day, depending on where they work—far less than they had originally demanded.

The documentary focuses almost exclusively on the wage struggles of the San Quintin workers, but hints of other battles within the strike pop up throughout. At a checkpoint where workers raise money to be able to continue striking, a woman holds up a sign reading “No more sexual harassment against women workers.” Ana is seen working long, meagerly paid days, highlighting the lack of overtime pay the pickers are also fighting against.

If these all seem like problems for Mexican growers to solve, “Invisible Hands” implicates the U.S. in the workers’ destitution. It is the newest episode in Al Jazeera America’s series “Fault Lines,” which explores the United States’s economic and political role in the world. In this case, U.S. companies’ role is to exert downward pressure on the wages and working conditions of the people “at the bottom of our food system,” as Rushing says.

Fernando Rodriguez, the CEO of Los Pinos, a major exporter of tomatoes, says paying workers more than the minor increases the growers offered would put him out of business. While he speaks to Rushing onscreen, workers literally run through his fields with buckets of green tomatoes—they are paid based on how much they pick. The costs of production and transportation are steep, Rodriguez says, and supermarkets have a higher profit margin than he does.


“This is a tremendously wealthy food system,” Holt-Gimenez says. “Six trillion dollars a year. It’s just very poorly distributed.” It is the nature of the food system, he says, to render workers like Ana invisible. “When you pick up an apple, you don’t see the labor in that apple . . . You walk down the grocery aisle, think about all this phantom labor embodied in all those products. We don’t see it.”


“We break ourselves working in the fields,” says a raspberry picker for BerryMex, a supplier for U.S. company Driscoll’s. Fearing retaliation, she speaks with her face covered by the lavender bandanna she wears in the field. She shows Rushing the thorns in her hands and arms she hasn’t been able to pick out. “It’s like sandpaper,” he says, feeling her skin.

When he tells her how much raspberries sell for in the U.S., she scarcely believes him. “How is it possible that they sell their product for so much money and they pay us so little for it?” The growers pay them “una miseria,” a pittance, she says again and again.


Rachel Luban is a writer living in Maryland. She contributes to Full Stop and her work has appeared on Jezebel, The Rumpus, and In Our Words. Follow her on Twitter: @rachelcluban.


Portside is proud to feature content from In These Times, a publication dedicated to covering progressive politics, labor and activism. To get more news and provocative analysis from In These Times, sign up for a free weekly e-newsletter or subscribe to the magazine at a special low rate.

Posted by Duane Campbell at 9:25 AM No comments:

We Must Respond to the Right-wing Attempt to Reframe the Charleston Massacre
By Bill Fletcher, Jr.
June 18, 2015
BillFletcherJr.com [10]
I never cease to be amazed by the speed and the ability of the political Right to distort the truth.
The attempt by the political Right to reconstruct the Charleston massacre as an attack on Christianity defies belief.  Yet it is something that we cannot simply sit back and allow to play out.  This is a moment when we must connect the Charleston massacre with the lynchings that are regularly taking place against people of color generally and African Americans in particular.  The Charleston massacre, allegedly carried out by someone comfortable wearing the flags of apartheid South Africa and white supremacist Rhodesia, is a continuation in the line of assaults on Black America.
The fact of the matter is that there is no basis to believe that this white man walking into a Black church and murdering Black people had anything to do with any antipathy to Christianity,  It has to do with an antipathy to Black people.  It also has the markings of someone who probably wished to ignite a race war.
The political Right will do whatever it can to move the eyes of reasonable people away from analyzing race.   When African Americans, Native Americans or Latinos are attacked by the police, the Right-wing moves quickly to question the motives, not of the police but of the victims.  When acts of violence after acts of violence against African Americans are held up for the entire world to see, the political Right does its best to question each incident and try to demonstrate how any ambiguity in one case should somehow compromise the integrity of any suggestion of a demonstrable pattern.
The fact that the Charleston massacre took place in a church should, however, demonstrate one fact about religion.  White supremacists are not restrained or constrained by the fact that the targets of their hatred may be people of faith.  As far as the white supremacists are concerned, those murdered in Charleston are not worshiping the same Creator of All Things as are the white supremacists.
One thing that can be done immediately is to contact right-wing media outlets and politicians and convey, in no uncertain terms, that we do not appreciate their commentary on the Charleston massacre.   The `analyses' offered by these right-wing pundits remind me of something that my father used to say:  "It is better to keep one's mouth quiet and to be thought of as a fool than to open one's mouth and prove it."  Oh, how I wish that Fox News would appreciate that point.
[Bill Fletcher Jr has been an activist since his teen years. Upon graduating from college he went to work as a welder in a shipyard, thereby entering the labor movement. Over the years he has been active in workplace and community struggles as well as electoral campaigns. He has worked for several labor unions in addition to serving as a senior staffperson in the national AFL-CIO.
Fletcher is the former president of TransAfrica Forum; a Senior Scholar with the Institute for Policy Studies; an editorial board member of BlackCommentator.com [11]; and in the leadership of several other projects. Fletcher is the co-author (with Peter Agard) of "The Indispensable Ally: Black Workers and the Formation of the Congress of Industrial Organizations, 1934-1941"; the co-author (with Dr. Fernando Gapasin) of "Solidarity Divided: The crisis in organized labor and a new path toward social justice"; and the author of "`They're Bankrupting Us' - And Twenty other myths about unions." Fletcher is a syndicated columnist and a regular media commentator on television, radio and the Web.]
Confederate Flag Raises Renewed Ire Following Charleston Church Killings
Protesters call for symbol of racial division to be removed from the grounds of the South Carolina state building in Columbia

- See more at: http://portside.org/print/2015-06-19/charleston-massacre-hate-crime#sthash.ptAkXUz0.dpuf
Posted by Duane Campbell at 9:16 AM No comments: