Choosing Democracy: We have a lot to learn from Brazil/Lula

Choosing Democracy: We have a lot to learn from Brazil/Lula:   Kuttner on TAP What Brazil Teaches America Actually delivering for working people matters. It also matters whether elites support democrat...
Posted by Duane Campbell at 7:31 PM No comments:

In the last 24 hours, Bernie Sanders and I have rallied voters across three cities and covered 300 miles of Texas together. We set out to inspire people in Austin, San Marcos, and McAllen to flip key seats for progress. 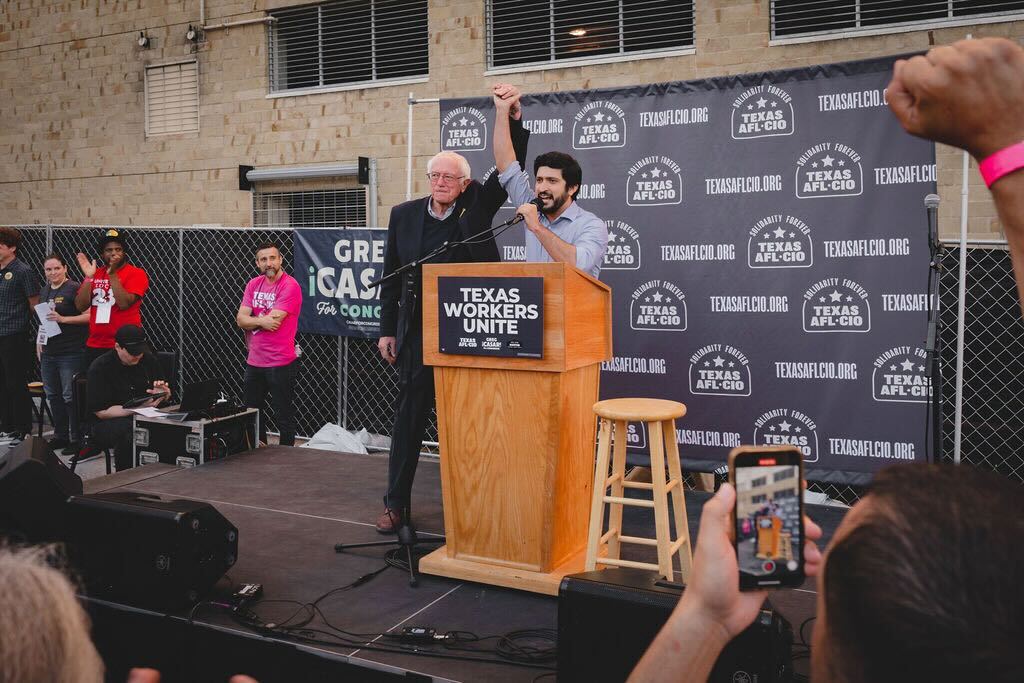 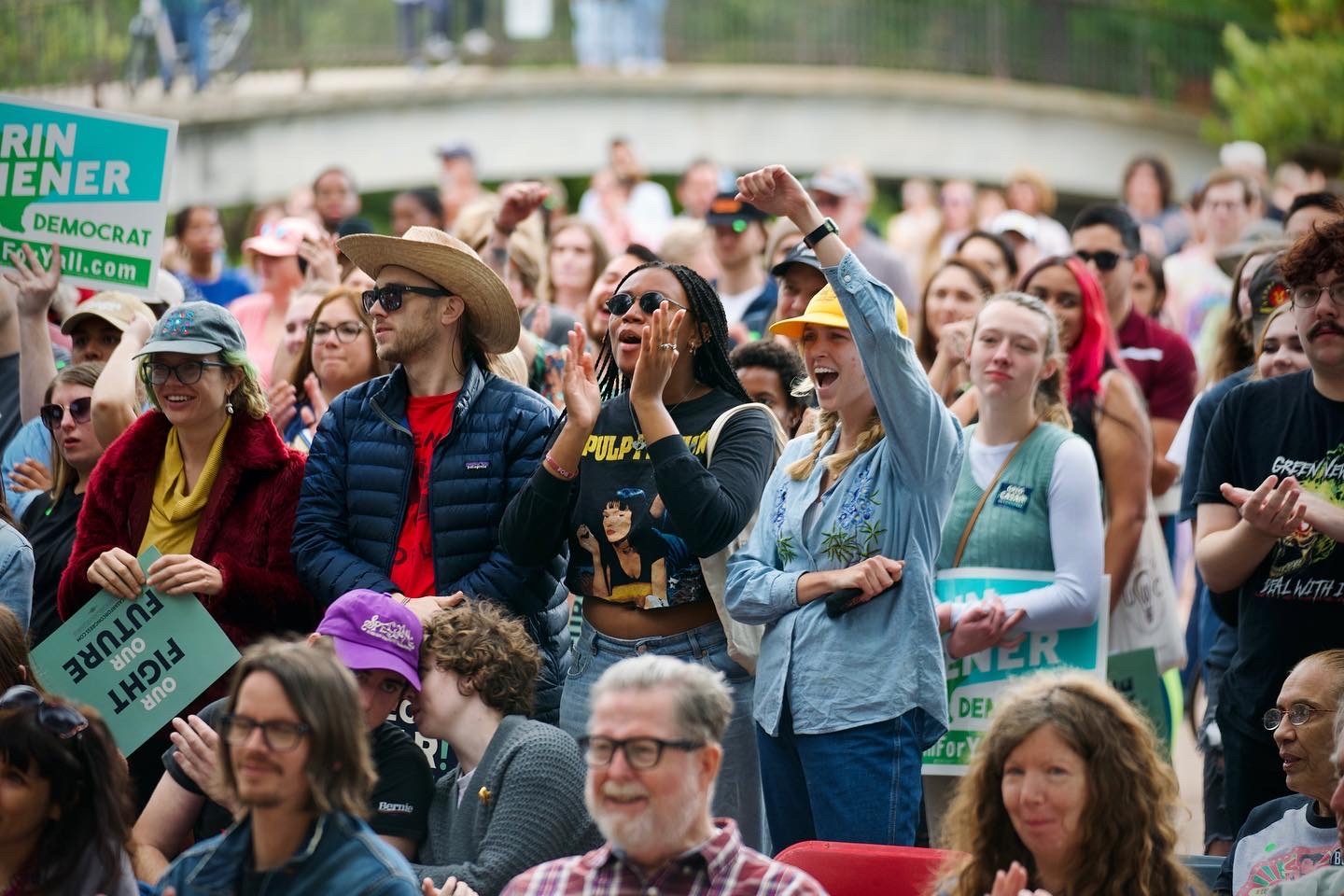 Posted by Duane Campbell at 5:31 PM No comments:

Posted by Duane Campbell at 8:16 PM No comments:

Cost of Living, Housing and Inflation are Top Issues

SAN FRANCISCO--(BUSINESS WIRE)--The Latino Community Foundation announced the results of their second California statewide poll of Latino voters ahead of the 2022 Midterm Elections. California’s Latino voters, the second largest voting bloc in the state, can potentially decide the balance of power in Congress. Yet, outreach to them is dismally low and 31% say they are still undecided.

“Latino voters demonstrate a strong commitment to progressive policy issues. Yet, there is such a low level of engagement of these crucial voters by candidates, with only 29% of Latino voters saying they have been contacted and asked to vote”

“Latino voters demonstrate a strong commitment to progressive policy issues. Yet, there is such a low level of engagement of these crucial voters by candidates, with only 29% of Latino voters saying they have been contacted and asked to vote,” said Jacqueline Martinez Garcel, CEO of the Latino Community Foundation. “Our democracy is stronger when voters are engaged in every election. Especially considering that Latino voters can determine the balance of power in Congress at a moment in time when we are facing one of the worst inflations in decades and we are still trying to heal and rebuild from the COVID pandemic.”

According to Matt Barreto, co-founder of BSP Research and Professor of Political Science at UCLA, “Two-thirds of Latino registered voters in California say they are certain to vote, but 31% say they are on the fence and not yet certain. If campaigns want to see massive Latino turnout, they need to engage heavily to get out the vote in the final weeks. Over half of California Latinos say they will vote early using a mail ballot and 19% say they will vote early in-person. That leaves just 29% of Latinos who plan to vote on Election Day. Get out the vote starts now.”

The Latino Community Foundation commissioned the statewide poll of California’s Latino Voters from BSP Research. They surveyed 1,200 Latino registered voters across California for a margin-of-error of +/- 2.8%. The poll was conducted on-line and by phone in English and Spanish at the discretion of the respondent. Interviews were conducted between September 26, 2022 – October 5, 2022.

"This poll represents a unique deep-dive into the California Latino electorate with one of the largest and bilingual sample of Latino voters from across the entire state,” says Gary Segura, President of BSP Research. “The findings clearly show Latinos expect their elected officials to deliver on climate change, affordable housing, immigrant rights and much more. However, the poll also shows that more outreach needs to be done by individual candidates to connect with and convince Latino voters. From ballot measures to the U.S. Congress, Latino voters can be the difference makers, but only if candidates reach out and engage the Latino community."

About the Latino Community Foundation

The Latino Community Foundation is on a mission to unleash the civic and economic power of Latinos in California. LCF has the largest network of Latino philanthropists in the country and has invested $20 million to build Latino civic and political power and leadership in the state. It is the only statewide foundation solely focused on investing in Latino youth and families in California. For more info, please visit: www.latinocf.org.

Posted by Duane Campbell at 12:02 PM No comments:

Statement by LULAC National Board.

Leaders of the League of United Latin American Citizens (LULAC) issued a statement following a two-day national board meeting pledging to members, corporate partners, and community allies to stay focused on the organization's mission of serving the 66 million Latinos in the United States and Puerto Rico. "We want to report that we have come out united, committed, and stronger than ever with one voice that includes elected LULAC representatives from all corners of the country," said Domingo Garcia, LULAC National President.

Meanwhile, a counterfeit rogue group is waging a misinformation campaign, including saying that former LULAC National President Roger Rocha is the LULAC National Institute (LNI) chairman. His reply is swift and straightforward:

"Fellow LULAC members and friends, I was notified this afternoon that I was elected the Chair of the LULAC National Institute (LNI); however, the position I hold within the LNI is its Vice Chairman. There is only one LULAC National Institute (LNI), and that is the one that is officially recognized by the LULAC National Board (LNO). The Chairman of the LNI is Mr. Domingo Garcia, and as such, the rest of the LNI Board members and I work with him for the betterment of our community." Garcia says the fake claims are being led by a group of five national board officers removed and impeached, with one of the officers expelled from membership in the league.

The action was taken after considering an array of violations of the organization's constitution. The decision means the individuals cease to be members of the national board. Also, refunding their membership dues ends their participation in the organization. Any future involvement in the league by these individuals requires re-applying for membership and acceptance of their dues by local, state, and national LULAC officials. Impeachment charges against President Garcia were dismissed.

National Vice-President for the Northeast

Posted by Duane Campbell at 5:25 PM No comments:

War on Immigrants is a War on Poor People

If low-income voters stick together, they can stop politicians from turning a humanitarian crisis into political theater.
By Shailly Gupta Barnes | October 19, 2022

In states across the country, cynical politicians are turning a humanitarian crisis into political theater.

New Hampshire Governor John Sununu recently announced that he was deploying the state National Guard to the U.S.-Mexico border, joining around two-dozen mostly GOP-led states. Meanwhile Florida, Texas, and Arizona have been busing migrants to blue states and cities, often under fraudulent circumstances.

Immigration is not a crisis — but the political, economic, and environmental factors that push people out of their homes are. So is the inhumane treatment these displaced people receive.

Republicans are most brazenly exploiting these conditions, but its origins cross party lines.

When President Clinton enacted the 1996 Illegal Immigration Reform and Immigrant Responsibility Act, he made more people eligible for deportation and made it easier to deport them. This drove up the undocumented population by making it riskier to seek documentation. And it laid the groundwork for a massive infrastructure to detain people.

Every administration since has expanded that infrastructure.

Under President George W. Bush, immigration enforcement moved to the new Department of Homeland Security, transforming a justice and labor issue into one of national security. Deportations started climbing, reaching more than 5 million under President Obama, despite his introduction of DACA to protect undocumented children.

President Trump escalated this trend, spreading dangerous lies about immigrants as violent criminals and invoking emergency powers to fund a southern border wall. Although President Biden reversed that move, our immigration system has not fundamentally changed.

Read more »
Posted by Duane Campbell at 8:01 PM No comments:

As you may have heard, the Fifth Circuit Court of Appeals ruled that DACA is unlawful and sent the case challenging the DACA policy back to the district court that originally ruled to end DACA. Our legal experts are still putting together a full analysis of the opinion. In the meantime, we wanted to share some important information with you about what this means and what comes next.

The Immigrant Legal Defense will be holding a Zoom webinar and Q&A session Friday, October 7, 2022, at 10 am in light of the decision. Please circulate the link widely and encourage anyone in your campus community to attend. No registration is needed, and we will not share any identifying information about who attends. We will not be recording so as to encourage as many as possible to attend.