The DSA blog,  Dl, has posted my tribute to Eric Vega and his work as a Chicano leader. Eric was in DSA for a time.
DL also included a story corp interview with Eric and Estella Sanchez.  Quite impressive.
https://www.dsausa.org/democratic-left/remembering-eric-vega-latino-leader-in-dsa-and-a-long-distance-runner/
The piece I wrote also includes a link to an archives project of Eric’s work. It is part of the  the Mexican American Education Project ( of which I was once co director), and the Chicano Movement in Sacramento.
This latter project was done by Lorena V. Marquez.  An ex student of mine and my wife.

Professor of Chicana/o History of U.C. Davis.  Author of the book, La Genre: Struggles for Empowerment and Community Self Determination in Sacramento. (2020) by the Univ. of Arizona Press.

Posted by Duane Campbell at 11:34 AM No comments:

A Tribute to the Life of Eric Vega

A  Personal Tribute to Eric Vega. 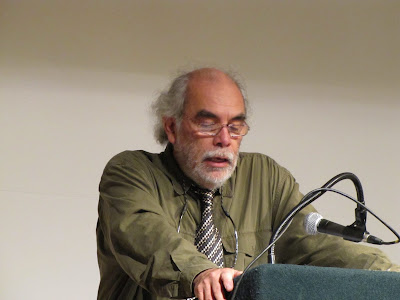 The  statement of the Sol Collective described  many of  Eric’s contributions well.

“Eric Vega was a father, husband, educator, labor organizer, activist, and philanthropist. He was a brilliant community leader who led by example and impacted our region through his decades of social justice work and mentorship of young activists, educators, law students, and politicians.”

Eric had a long and sustained history of activism and numerous causes.

Eric became a Professor of  Chicano Studies/ Ethnic studies. CSU- Sacramento in the 1980’s as ethnic studies became a part of the university systems. In this role he served as faculty sponsor of the campus MEChA Movimiento Estudiantil Chicanos de Atzlán. This work assisted generations of young people to become political activists and change agents.

From 1992- 1994, Along with DSA – NPC member Al Rojas and the Latino Commission  Eric  worked to unite Sacramento labor work with Chicano community activism to oppose the North American Free Trade Agreement (1994). This effort included participating in election observing in Mexico and bringing  former Governor of Michoacán and  presidential  candidate Cuauhtémoc Cardenas to California for an opposition tour.

Eric joined DSA after extensive experience with other left formations in the 70’s and 80’s.

In 1994, he served as Chair of the Sacramento electoral  effort to defeat the Anti Mexican Immigrants  Proposition 187. Eric focused  the  DSA’s Latino Commission's efforts on the California  Prop. 187 ( 1994)  and anti Affirmative Action California  ( so called) Civil Rights Initiative. 1996 (Prop 209) .

With his  leadership DSA and MEChA  co sponsored a numerous forums on Chicanos Organizing for Social Change on the CSU campus.  In 2004,  Eric  co authored with me a chapter on Racism and Schools in my book, Choosing Democracy : A practical guide to multicultural education ( 3rd.edition) extending the coverage of Chicano history into the public school curriculum.

While thoroughly engaged within the Chicano community, Eric was always supportive and active with multiracial efforts such as opposing the 1996 CCRI. ( California misnamed Civil Rights Initiative.

Eric, along with his wife Janet Vining, herself an attorney and  activist,  was always open and ready to help others and to get the necessary work done in campaigns and events.   He was kind and caring. He drew people to his work with his positive openness. He touched the lives of hundreds of students by listening to others, including young people, and makings  them  feel welcome in a broad range of efforts.

Eric’s life was significantly influenced by the Chicano cultural resistance  of the Chicano Movement  which grew significantly through developments in the many arts In the 70’s and 80’s. It is well known for the development of the RCAF ( Royal Chicano Air Force).  He contributed to this tradition as one of the founders of the Arts and Culture Center the Sol Collective.  Today, the Collective continues as a vibrant effort to engage and involve young people in their own self definitions. You can read the Sol Collective’s generous description of Eric’s founding contributions here.

Within the Sol Collective, Eric and others created the Sacramento Activist School to train young people as organizers.   I heartily recommend that readers interested in  seeing Eric reflecting upon his own life as a socialist and a Chicano Activist in  view this oral history from  The Sacramento Movimiento Chicano and Mexican American Education Oral History Project (2014)

We make the road by walking.  It has been a road well traveled together. It has been my honor to have walked so far with Eric.   We miss you brother.   I will try to cary it on.