Every 30 seconds, a Latinx person turns 18. That means that, in the five minutes that it takes you to read this article, 10 Latinx youth will turn 18, 2,880 in the next 24 hours, and over a million in the next 365 days—each one potentially becoming eligible to vote.

These demographic trends are not new, and already we are seeing the impact of our growing community. In the 2020 presidential election, 16.6 million Latinx community members cast their vote, a 30.9 percent increase compared to 2016.

Our community has the potential to change the face of national and local elections while increasing representation in government and thus vastly improving the socioeconomic state of our community. According to Voto Latino, however, there were still 12 million Latinx people eligible to vote who did not register for the 2020 election.

While it is common to blame our community, the truth is that this is a constructed reality and the Latinx community’s lack of participation is by design. Voter apathy and lack of community engagement are founded on the lies that are continuously told within and to our community.

As a young Latina voter, I have been lied to.

Read more »
Posted by Duane Campbell at 12:50 PM No comments:

I'm reaching out as you've been there for farm workers in the past taking action to protect them from abuse and exploitation. We have a horrifying situation to share with you and need to ask you to sign our petition to the Biden Administration @

Operation Blooming Onion was in the news earlier this year after it resulted in at least 54 indictments that included forced labor trafficking, human smuggling and money laundering—among others—in a years-long exploitation of workers on South Georgia farms. According to the Department of Justice, the workers were "required to dig onions with their bare hands, paid 20 cents for each bucket harvested, and threatened with guns and violence to keep them in line. The workers were held in cramped, unsanitary quarters and fenced work camps with little or no food, limited plumbing and without safe water. The conspirators are accused of raping, kidnapping and threatening or attempting to kill some of the workers or their families, and in many cases sold or traded the workers to other conspirators. At least two of the workers died as a result of workplace conditions."

The situation has frighteningly expanded to the very officials whose job it is to protect and advocate for these H2A workers. According to an article in USA Today, two Georgia officials have ties to one of the largest U.S. human trafficking cases ever prosecuted involving H2A workers.

Something needs to be done NOW! The federal government needed to step in during the civil rights movement when state officials were complicit. Now GA's Labor Department—which should be protecting farm workers—has been linked with those charged with exploiting them. Federal officials must step up and take the lead. Sign the petition @   https://sign.moveon.org/petitions/georgia-officials-linked-to-h2a-human-trafficking-scheme?share=33875253-4294-4ccf-bab1-14dddd0d1974&source=c.fwd&utm_source=c.fwd

The indictments didn't explicitly detail the links to the Georgia government, but journalists combed through public records and social media to reveal them. Perhaps even more shocking than the indictments is that the very government officials tasked with protecting farm workers are accused of being connected to these horrible crimes.

Former Georgia Department of Labor employee Brett Bussey was indicted in the Operation Blooming Onion case for conspiring to engage in forced labor. State Monitor Advocate Jorge Gomez' sister and nephew have been indicted and other members of his family are being investigated. Currently Gomez remains on the job. His sister, Maria Leticia Patricio, is accused of conspiring to engage in forced labor involving foreign farm workers. His nephew, Daniel Mendoza, is accused of aiding in the kidnapping of four workers. His daughter, another sister and a niece are among those whose homes were searched or who had property confiscated in connection with the case but were not indicted.

As they were employed by a state agency tasked with preventing labor violations and inspecting H2A housing, this is clearly a conflict of interest. Sign the petition calling for greater federal oversight on the H2A program and demanding the Biden Administration immediately implement policies to stop the abuses. Go to  https://sign.moveon.org/petitions/georgia-officials-linked-to-h2a-human-trafficking-scheme?share=33875253-4294-4ccf-bab1-14dddd0d1974&source=c.fwd&utm_source=c.fwd

Thank you for caring,Jocelyn ShermanUFW Digital Director
Posted by Duane Campbell at 7:29 PM No comments: 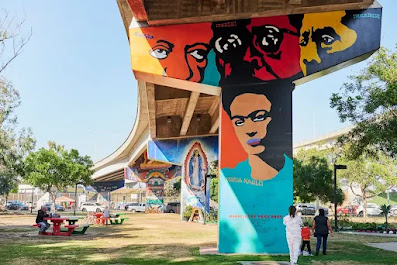 Posted by Duane Campbell at 10:31 AM No comments: 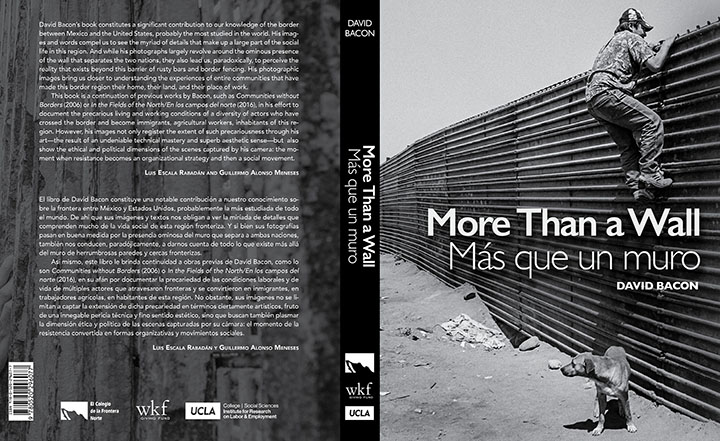 - a book of photographs by David Bacon and oral histories created during 30 years of covering the people and social movements of the Mexico/U.S. border
- a complex, richly textured documentation of a world in newspaper headlines daily, but whose reality, as it's lived by border residents, is virtually invisible.
- 440 pages
- 354 duotone black-and-white photographs
- a dozen oral histories
-  incisive journalism and analysis by David Bacon, Don Bartletti, Luis Escala, Guillermo Alonso and Alberto del Castillo.
- completely bilingual in English and Spanish
- published by El Colegio de la Frontera Norte with support from the UCLA Institute for Labor Research and Education and the Center for Mexican Studies, the Werner Kohlstamm Family Fund, and the Green Library at Stanford University

Price:  $35 plus postage and handling
Pre-publication discount for orders before May 1, use coupon "prepublication"
To order, click here:

"The "border" is just a line. It's the people who matter - their relationships with or without or across that line. The book helps us feel the impact of the border on people living there, and helps us figure out how we talk to each other about it. The germ of the discussion are these wonderful and eye-opening pictures, and the voices that help us understand what these pictures mean." - JoAnn Intili, director, The Werner-Kohnstamm Family Fund  MORE THAN A WALL/MAS QUE UN MUROBorder Communities and their Social Justice Movements
Photographs by David Bacon
Sit down and read. Prepare yourself for the coming battle.  Mother Jones.  1837- 1930,.
Posted by Duane Campbell at 8:07 PM No comments:

Panasonic, Local Authorities and a Corrupt Union Are Colluding to Impose an Illegal Collective Bargaining Agreement on Workers in Violation of USMCA Labor Rules

In October 2021, workers rejected an existing labor contract at Panasonic’s Reynosa facilities during the USMCA-required relegitimization process. Tensions have escalated since the firm began colluding with a Confederación de Trabajadores de México (CTM) union and local authorities to try force a new CBA on workers that they have not approved, which was negotiated by the CTM union that does not lawfully represent them. CTM is a national labor federation associated with a conservative political party that is notorious for protecting the interests of employers rather than workers.

“This complaint raises serious allegations about the actions of the employer, the CTM union, and the local labor authority that should be investigated immediately,” said Ben Davis, United Steelworkers’ Director of International Affairs.

“Fighting against the CTM means facing a titan, but there is no small adversary and independent Mexican unions grow stronger day-by-day due to workers’ rejection of corrupt unions because of their betrayal, embezzlements, robbery and exploitation,” said Susana Prieto Terrazas, labor leader and member of the Mexican Congress. “Neither SNITIS nor other minority unions will rest until justice is achieved. The government of Tamaulipas cannot keep unlawfully undermining freedom of association and union democracy and we commend the U.S. government for helping us to keep in check corporations that benefit from labor rights violations in Mexico.”

In violation of its obligations under Mexico’s 2019-reformed Federal Labor Law, Panasonic has allowed SIAMARM’s staff to go into the plants and impose its delegates who have tried to bribe workers in exchange of their votes. Panasonic also started to withhold union dues for SIAMARM from its employees’ paychecks. It also circulated a new CBA signed with the CTM union, filing it with the local Conciliation and Arbitration Board and colluding with the CTM union to demand that workers sign a document endorsing this illegitimate contract.

“Bold action from the U.S. government using the Rapid Response Mechanism led to two independent unions winning elections at GM Silao and Tridonex. We are confident that the Biden administration will act accordingly in this case and work with the Mexican government to address this troubling state of affairs at Panasonic,” said Daniel Rangel, an attorney with Rethink Trade. “Since November 2021, the authority to register collective contracts lies exclusively with Mexican federal institutions. The fact that the Tamaulipas government acceded to register this fraudulent contract shows the lengths local elites are willing to go to obstruct workers’ ability to unionize independently and demand better wages and working conditions.”

Rethink Trade is a program of the American Economic Liberties Project.

Posted by Duane Campbell at 7:32 PM No comments:

Members of Congress join Solidarity Organizations on a Fact-Finding Mission to Central America
Posted by Duane Campbell at 8:12 PM No comments:

The Reality Check: HONORING DOLORES HUERTA'S LEGACY: HONORING DOLORES HUERTA'S LEGACY Photoessay by David Bacon The Nation, April 2, 2022 https://www.thenation.com/article/society/dolores-h...
Excellent photo essay.  Look at the photos.
Last fall I walked from Poplar to Delano, Calif., in honor of Larry Itliong, who started the 1965 grape strike and boycott there, with Dolores Huerta, cofounder of the United Farm Workers (UFW). She was 91 then, and I had a hard time keeping up. She sent me a note afterward that ended, "Sí Se Puede con El Rojo Tocino." It was a beautiful joke."Sí Se Puede" are three words we all use now, but she invented this confident way of saying "Yes We Can!" "Tocino" was the nickname the union gave me in the years I worked as an organizer-it means "bacon," my last name. And calling me "El Rojo," or "The Red," in this way honored my politics.When I came back from a solidarity work brigade in Cuba in the 1970s, I landed in New York City with no place to sleep. I called Dolores's daughter, Lori, a friend from California. Not only did I get space on the floor of the NYC boycott's headquarters, but Dolores and her partner, Richard, César Chávez's brother, took us out to eat. Over pizza I enthused about the island. I had stars in my eyes, for both Cuba and Dolores, and still do. I went to work for the UFW as an organizer a few months later.There was often tension in the union about radical politics, and being called a red was sometimes the route out the door. But for Dolores and Eliseo Medina, being a good organizer was the bottom line-doing what the workers needed.Over the years, long after I had left the UFW and worked for other unions and then as a photojournalist, I would see Dolores again and again. Going to Watsonville to cover the organizing drives of strawberry workers or to Salinas for the strikes in the vegetable fields, I knew she'd be there. It was a profound experience to watch her in union contract negotiations-this diminutive woman facing off against the beefy growers across the table-and see the sense of power it gave workers.Returning from Iraq, where I photographed workers after the 2003 US invasion, I took her picture in the front line of marchers against the war. When we were in Sacramento trying to stop the anti-immigrant, anti-affirmative-action, anti-bilingual initiatives, she was the first to speak out.So when she called me El Rojo Tocino, I thought, "What a compliment!" I hope I live up to it.
Posted by Duane Campbell at 12:58 PM No comments: