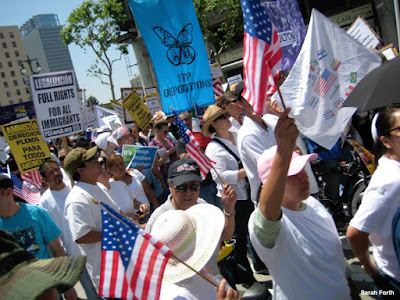 Sat May 1 throughout California | details
On International Workers Day and Immigrant Rights Day, we recognize and celebrate workers and their right to organize. This May Day also concludes the first 100 days of Biden’s administration. In the next 100 days, the President and the Congress will decide whether to create the pathway to citizenship for the approximately 10 million undocumented people who call this country home.

At this week’s Moral Monday, viewers were urged to attend Movimiento Cosecha’s May Day Action in Washington DC, where activists and allies will demand sweeping immigration reform. We Californians can show our support at actions taking place across the state. Find a May Day event near you.

Posted by Duane Campbell at 2:16 PM No comments:

Email ThisBlogThis!Share to TwitterShare to FacebookShare to Pinterest
Labels: California, immigrants, May Day

streamed.  You can watch it now,

Join the Poor People’s Campaign for a Moral Monday on Immigration on April 26th at 3pm ET/ 12pm PT to demand respect, dignity, and human rights for all immigrants!

We’ll be joined by immigrant leaders on the frontlines of movements for social change, demanding that we transform our broken immigration system with comprehensive and just immigration reform. From de-militarizing the border to the repeal of mandatory detention, deportation, child detention and family separation, to ensuring full access to public welfare and social programs and permanent protection for ALL 11 million undocumented immigrants, we are coming together to say that EVERYBODY has the right to live and thrive in this country.

*This online event will be interpreted into ASL and Spanish, and open captioned.*

Immigrant rights are human rights. Our nation’s dehumanizing and violent immigration system embodies the five interlocking injustices of systemic racism, poverty, the war economy, ecological devastation and the distorted moral narrative of religious nationalism. And we can’t be silent anymore!

Refugees at the Border: How do we respond?

Posted by Duane Campbell at 3:57 PM No comments:

No one denies that immigration brings change, Tucker — just that it's racist to be angry about it

Fox News host Tucker Carlson is really determined to sell his audience on what is — and this cannot be stressed enough — a literal neo-Nazi conspiracy theory. Neo-Nazis and other white nationalist groups have long pushed the idea that a shadowy cabal of Jews is secretly conspiring to "remake" America and "steal" it from its rightful owners, white Christians. They are supposedly doing this by "importing" non-white people — who neo-Nazis believe to be mentally inferior and therefore easily controlled by the shadowy Jewish conspiracy — into the U.S.

Carlson's only spin is replacing the word "Jews" with "Democrats," but other than that, he's lifting "replacement theory" wholesale from the neo-Nazi dregs of the internet and now is repackaging this ridiculous conspiracy theory as if it were an inarguable fact, much to the delight of white nationalists. And because Carlson's main modus operandi is trolling, he's relishing the negative attention he gets by hyping a racist conspiracy theory and he's using his audience's love of liberal-triggering to encourage them to mindlessly burrow deeper into the worldview of unapologetic fascists.

Carlson is a moral monster. It's likely he has been this way since his high school "Dan White Society" days. Sadly, he is a monster that must be dealt with, despite the unfortunate risk of troll-feeding. It's not just because Carlson has an audience that regularly tops 3 million viewers, though that alone is terrifying. It's that he is a smart man whose strategy for selling this conspiracy theory is sinister and clever. To fight back, it's crucial that progressives don't fall into the trap he is setting.

Basically, Carlson is pulling off two bait-and-switch routines. First, he falsely conflates any cultural change with his ridiculous "replacement" conspiracy theory. Second, he tries to paint the debate as one over whether change is real — something that literally no one contests — so as to avoid talking about the real issue, which is how it's nuclear-level racist to react to cultural change like it's some kind of existential threat. In reality, it's just what happens if you're lucky to live long enough to experience it.

Both tactics were on full display on Wednesday night, when Carlson took a break from trying to martyrize Derek Chauvin to once again promote "replacement theory" by bashing Rep. Ted Lieu, D-Calif., who was born in Taiwan but grew up in Ohio. Lieu was angry at Rep. Scott Perry, R-Penn., for parroting the "replacement theory," and retorted on Twitter. "And with every passing year, there will be more people who look like me in the US. You can't stop it. So take your racist replacement theory and shove it."

"In other words, you're being replaced, and there's nothing you can do about it, so shut up," he shouted with what can only be described as a maniacal laugh.

Here's the thing, though: Lieu didn't give any game away. Liberals have neverdenied that immigration changes society. Of course it does, along with generational shifts, changing fashions, and evolving social norms. When I was young, people wore low-rise jeans and MTV still played music videos. Now it's skinny jeans (though apparently not for long) and TikTok. Change is inevitable, and generally good, as anyone who has a memory of hair-destroying styling products in the bad old days can attest.

What makes "replacement" a conspiracy theory, however, is that it invents this elaborate fantasy ascribing change not to the normal churn of human society, but to a sinister and hidden conspiracy of Jews and Democrats who are secretly inflicting change to pull off some grand scheme.

That is, of course dumb. It's like "neo-Nazi message board" levels of dumb. Carlson deflects attention from that by pretending that we're debating the factual assertion "change is real," and lashing out at straw-liberals who, though only in his imagination, are pretending it's not.

More importantly, Carlson is propping up this fake debate so that he can smuggle in his real argument, which is that change is bad.

Carlson's whole gambit depends on the presumption that change is a terrible thing. But that belief is both delusional and, on the subject of immigration, racist. As Adam Serwer of The Atlantic recently wrote, the same kinds of arguments were made "at the turn of the 20th century" to argue that "Polish, Russian, Greek, Italian, and Jewish" immigrants "posed a danger." Carlson's hysterics make about as much sense as some man in the 1920s arguing that the bagel is the downfall of American civilization.

Lieu's point actual point was, of course, that people like him are a valuable addition to the American community, and we should welcome the changes immigration brings. Carlson knows that he can't win that argument, especially when reminded of how idiotic such arguments from the past look to modern eyes. As Sewer notes, the Tucker Carlsons of the 1930s were so racist and paranoid that even Nazis rejected some of their ideas as "a bit too strict." So instead, Carlson raves about secret conspiracies and pretends that liberals are hiding something. It's pure projection, of course. The only people hiding anything are Carlson and his allies, who are hiding their true motivation: naked racism.

The "replacement" and "change" language feeds on the very human fear of mortality that is especially powerful with the largely elderly Fox News audience. As Heather "Digby" Parton wrote last week for Salon, "The fact is that we are all going to be 'replaced' by the generations that come up behind us." Change is often terrifying because it's a reminder that time is passing by and that the grave awaits us all. For many people, it's easier to let this sour-faced, middle-aged prep school brat lash out at immigrants than grapple with their fears of change and death. Carlson is a cynical demagogue, no doubt, and that's why he's a dangerous one.

Amanda Marcotte is a senior politics writer at Salon and the author of "Troll Nation: How The Right Became Trump-Worshipping Monsters Set On Rat-F*cking Liberals, America, and Truth Itself." Follow her on Twitter @AmandaMarcotte and sign up for her biweekly politics newsletter, Standing Room Only.

Posted by Duane Campbell at 3:28 PM No comments:

The Reality Check: FARMWORKERS NEED FAMILIES, NOT DEPORTATION AND EXP...

Join us on Thursday, April 15 at 8pm eastern/5pm pacific, for our monthly general meeting. REGISTER HERE.

This month we will be discussing the upcoming Building the Religious Left Conference and National DSA convention.

These meetings are an opportunity to hear about what you and your chapters are doing and to connect our work.

As a reminder, WG monthly membership meetings are on the 3rd Thursday of every month at 8pm eastern.

The Working Group endeavors to organize and fight for the full liberation of peoples impacted by mass displacement, forced migration, and oppression caused by global capitalism and imperialism. We will fight to abolish ICE, abolish borders, end detention, end travel bans, and stop deportations.

Posted by Duane Campbell at 7:52 PM No comments:

( for members of Democratic Socialists of America)

As you may know, the 2021 Convention is coming up this August. As we lead up to the Convention, the Immigrants' Rights Working Group Steering Committee unanimously adopted a Priority Resolution On the Defense of Immigrants and Refugees.

Sign to support the Resolution On Defense of Immigrants and Refugees

Political projects including the (draft)  platform position to treat immigration as only or primarily a subcategory of Internationalism,  do not include a substantive and realistic analysis  the migrant working class in the nation fail to understand both race and class in the U.S. and thus fail to address our  fundamental political tasks.

Of course there is an international component to the migration issues just as there is an international component of the ecological crisis, and the need to rebuild a labor movement and a socialist movement.  The world is experiencing a major restructuring of the global economy directed by self-interested transnational corporations. The impoverishment of the vast majority of people in pursuit of profits for the minority has pushed millions to migrant in search of food, jobs, and security. Global capitalism produces global migration. NAFTA and other trade agreements produces a new wave of migration. The economic restructuring of Asia, Africa, and Latin America has pushed millions to migrate to the U.S. in search of a  safety and a decent standard of living.

How you can assist ?

If you are a  DSA member, please read the linked  proposed resolution (above)  on the Defense of Immigrants and Refugees as drafted by the Immigrants Rights Working Group. ( IMWG).

If you agree with the perspective, you are invited to endorse the resolution using the link provided. If we get 100 signatures, the resolution will go forward to the convention for consideration. Only DSA members may endorse this resolution.

Please complete your signing before April 13, 2021.

If you are not a DSA member, you may join at dsausa.org

Posted by Duane Campbell at 4:41 PM No comments:

Too Close to Slavery 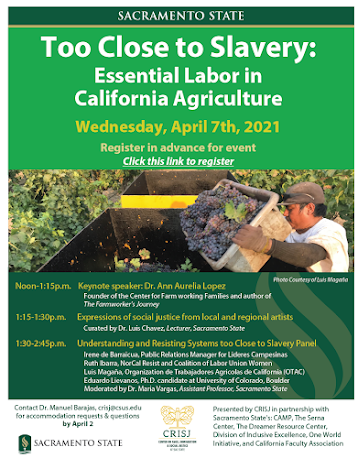 Posted by Duane Campbell at 12:00 PM No comments: