Read more »
Posted by Duane Campbell at 10:44 AM No comments:


Read more »
Posted by Duane Campbell at 7:29 PM No comments:

Destroy Their Economic Livelihoods, and They Will Come

Posted by Duane Campbell at 10:14 AM No comments:

Posted by Duane Campbell at 3:17 PM No comments:

Posted by Duane Campbell at 10:11 AM No comments:

Julia Preston. NYT. June 17, 2014.
McALLEN, Tex. — Exhausted and dazed, hundreds of Central American migrants, mainly women with small children, come to the bus station of this border city every day now, spilling into a church next door that has opened its doors. Having crossed into the United States illegally, the new arrivals are often grimy and famished. In the church, they eat, bathe and sleep, changing into donated shoes and clothes.
With no immigration detention site equipped for women with children in the area — the closest one, in Pennsylvania, is overbooked — they are freed by the Border Patrol with a bus ticket to travel to where they have relatives in this country, and an order to appear in immigration court in 30 days.
They are among at least 30,000 migrants released this year, border officials and federal lawmakers said, amid a surge of illegal crossings in the Rio Grande Valley.
Read more »
Posted by Duane Campbell at 9:59 AM No comments:

Emergency refuge centers set up along border for children

A new center in McAllen, Texas, is part of the Church response to the surge triggered by harsh conditions in Central America and changes in U.S. deportation policies.

Central American immigrants ride atop a freight train to Ixtepec, Mexico, on their way to the United States.
– John Moore/Getty Images
MCALLEN, Texas — Children from Mexico and Central America arrive at the bus station in tattered clothing they’ve worn for weeks. They’re unshowered, hungry and scared. Boys and girls as young as 3 cry out for Mommy, Daddy or Grandma.
Hundreds who arrive here each week have their immediate needs fulfilled by a new Catholic Charities center that opened June 11 near the McAllen bus station.
The children are part of a massive, unprecedented and unanticipated flood of young immigrants escaping treacherous conditions in Latin America, after President Barack Obama announced plans two years ago to stop deportations of child immigrants who meet certain criteria.
The Associated Press reported that authorities apprehended 47,017 unaccompanied children on the border from October through May, up 92% from the same period a year ago. Other news reports say the surge has overwhelmed federal border facilities that lack adequate food, beds and sanitary facilities.
The federal government is trying to hire temporary border agents to babysit the children, as the government determines one at a time whether to deport or connect individuals with family members in the States. Meanwhile, volunteers from religious communities are stepping in to help.
The days-old Catholic Charities facility in McAllen provides clothing, food and personal items as young children and teens wait for federal agents to open case files. Volunteers sing to the kids, assuring them they are loved by God and will be safe.
The center resulted after a handful of Catholic women took initiative to provide for the children’s immediate needs by showing up with supplies.

Read more »
Posted by Duane Campbell at 5:16 PM No comments: 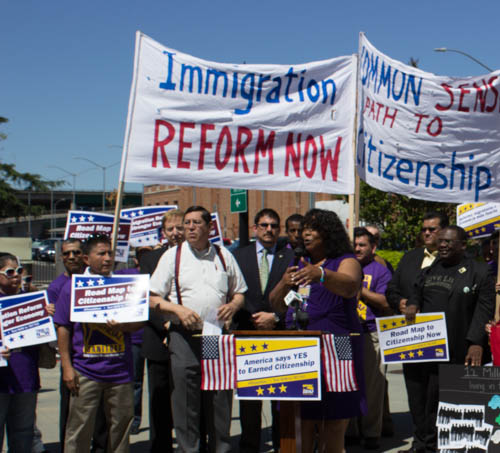 Posted by Duane Campbell at 11:39 AM No comments: