Murders of resistance activists in Honduras

"As a revolutionary I will be today, tomorrow

and forever on the front lines of my people,

all the while knowing that I may lose my life."

The bodies of slain activists are piling up in

Honduras. While it's being kept quiet in most Honduran

and international media, the rage is building among a

with the tragic announcement of each companero/a.

Now that the world heard from mainstream news outlets

such as the New York Times of a "clean and fair"

election on Nov. 29 (orchestrated by the US-supported

junta currently in power), the violence has increased

even faster than feared.

The specific targets of these killings have been those

perceived as the biggest threats to the coup

establishment. The bravest, and thus the most

vulnerable: Members of the Popular Resistance against

the coup. Their friends and family. People who provide

the Resistance with food and shelter. Teachers,

the fallacy of an un-elected regime taking over their

country. All associated with the Resistance have faced

constant and growing repercussions for their courage in

protesting the coup. With the international community

given the green light by the US that democratic order

has returned via elections, it's open season for

violent forces in Honduras working to tear apart the

political unity of the Resistance Front against the

The killings are happening almost faster than they can

Read more »
Posted by Duane Campbell at 8:50 AM No comments:

Below is a summary of the immigration reform legislation introduced by Congressman Luis Gutierrez and many other members of the U.S. Congress. We would qualify this legislative initiative as a very good beginning of the immigration debate about the character of immigration reform that is good for immigrants and good for America.We find much more to support in this legislation than to recommend for improvements and call on all immigrant communities to review it closely, draw your own conclusions, and make your voices heard. The debate now begins. We certainly will do our part to make the information available to our constituents, organize informational forums and hearings, make our recommendations and suggestions known to the legislators, and mobilize our community in favor of the best possible deal that we can get under the dire circumstances that we currently face in the country.
We applaud Congressman Luis Gutierrez for his perseverance, his colleagues of the various congressional caucuses, and the many organizations, churches, and unions that played a role in bringing to light this legislation. Now the really tough fight begins to seeing it through to the U.S. Senate - secure a comparable companion bill - and corraling enough votes for its approval in 2010 with the signature of the president.

Read more »
Posted by Duane Campbell at 11:11 AM No comments:

Brazil's differences with Washington are Positive

Over the last decade an epoch-making political change has taken place in the Western Hemisphere: Latin America, a region that was once considered the United States' "back yard," is now more independent of Washington than Europe is.

But while Latin America has changed, U.S. foreign policy has not - even now, with the election of President Obama. Hence the region, including Brazil, finds itself increasingly at odds with Washington. The military coup in Honduras is just one recent and glaring example.

Read more »
Posted by Duane Campbell at 8:09 AM No comments: 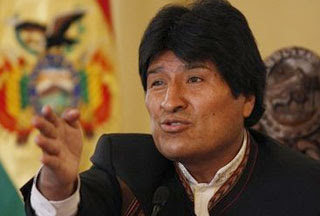 By Tanya Kerssen
Bolivian president Evo Morales and his political party,
the Movement Towards Socialism (MAS), won a resounding
victory in the presidential elections this past Sunday,
December 6. The nearest challengers, Manfred Reyes
Villa and his running mate Leopoldo Fernandez--whose
current address is a La Paz prison, where he stands
accused of ordering the murder of pro-government
peasants --represent an old political and economic order
that has used sedition and violence in an effort to
obstruct and destabilize the Morales government.

The old order and the new are locked in a struggle for
the future of Bolivia. "The social movements are
critical for presidents to be able to create a new
alternative," declared Bolivian Foreign Minister David
Choquehuanca in the tropical city of Cochabamba in
October at a summit of leftist Latin American
presidents, including Venezuela's Hugo Chavez and
Ecuador's Rafael Correa. At the parallel Social
Movements Summit comprised of 700 delegates from 40
countries, Isaac Avalos, leader of the Bolivian
Peasants Federation promised to help "bury the
opposition" in the election.


Read the entire article here:  http://globalalternatives.org/node/110
Posted by Duane Campbell at 11:47 AM No comments:

Justice for Nativo Lopez and Overhill Farms Workers
"An injustice anywhere is a threat to justice everywhere." Martin Luther King, Jr.
Fact Sheet
INTRODUCTION. Nativo Lopez is known nationally for his organizing and support of immigrants, workers, and students. As president of the Mexican American Political Association and national director of the Hermandad Mexicana Latinoamericana, Nativo is a vocal advocate for the rights of undocumented immigrants who face persecution because of their status: be it at their workplace, school, or communities. Most recently he founded a new independent union, the General Brotherhood of Workers International Union, and has been working closely with terminated employees from the company Overhill Farms and assisting in their fight against unjust firings. Overhill Farms is the largest food processing and manufacturing company in California with between 800 and 1,000 employees, based in the city of Vernon, and supplies packaged food product to companies such as Jenny Craig, Panda Express, El Pollo Loco, American Airlines, Northwest Airlines, Safeway, and many other super-market chain stores.
· Nativo faces eight felony charges by the Los Angeles District Attorney, Steve Cooley, that include: fraudulent voter registration, fraudulent document filing, perjury, and fraudulent voting. On July 8th, 2009, Nativo declared himself "NOT GUILTY" to a judge during his arraignment. These charges are based on allegations that he used a business address (of his organization) to register to vote and vote in an election, while allegedly residing at a different location. The period in question was January 2006 to March 2008. He voted on one single occasion, and never in multiple jurisdictions. The California Secretary of State investigated the case for one-and-a-half years, while the department could have decided to take administrative action, instead turned it over to the Los Angeles County District Attorney for prosecution.

president of Uruguay with nearly 52 percent of the vote

Sunday, seven to eight percentage points ahead of his

to projections by pollsters.

Mujica, a former senator and agriculture minister, will

take over from socialist President Tabaré Vázquez on

Mar. 1, to head the second administration of the

Read more »
Posted by Duane Campbell at 7:08 PM No comments:

Eduardo Galeano on elections in Uruguay and Honduras

Posted by Duane Campbell at 9:14 PM No comments: 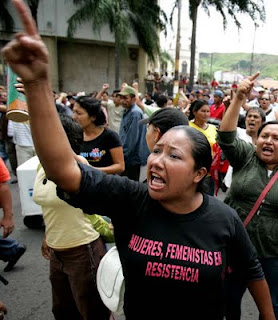 School of The Americas Watch.

And now, the second bath of whitewash was even more

challenging, especially since the first whitewash

proved to be kind of thin and exposed the words from

below. Thus, it didn't really convince many. As a

matter of fact, it didn't convince anyone except the

helped to stir the first batch), Now, the challenge of

November 29th whitewash was to transform the civilian

coup into a shining electoral display of freedom,

fairness and grand participation so that all the world

would say, "wow, that Honduran coup is gone. Now

Honduras has a real and wonderful democracy, End of

Except that it's probably the beginning of a story. One

that we thought had been left to rest in Latin America

years and years ago. One of fear and repression and

deaths and disappearances. We know the litany all too

well, and we remember the names of its thousands of

victims each November. This year we had to add too many

new names from Honduras. And, if our government chooses

to recognize these elections, this massive whitewash, I

fear that many more names will be read from the stage

in front of Ft. Benning next year. And perhaps not just

Read more »
Posted by Duane Campbell at 12:22 PM No comments: