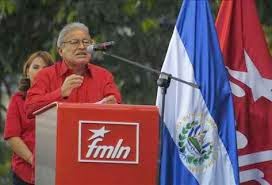 Salvador Sanchez Ceren, a onetime rural schoolteacher who became a rebel commander during El Salvador's long civil war was sworn in as president Sunday, the first former guerrilla to lead the Central American nation.
Sanchez Ceren, 69, began his five-year term promising "honor, austerity, efficiency and transparency" at the inauguration ceremony attended by 13 heads of state or government.
Sanchez Ceren won a narrow victory March 9 over Norman Quijano of the Nationalist Republican Alliance, which had governed El Salvador for most of the past two decades.


Sanchez Ceren's Farabundo Marti National Liberation Front battled U.S.-backed governments during a 12-year conflict in which some 76,000 people died. The Front became a political party after peace accords in 1992.
He alluded to that struggle Sunday, saying his government is possible "only because of the work of our heroes and martyrs ... visionary people who gave their lives and dreamed of a country with democracy."
The Front first won the presidency in 2009 under outgoing leader Mauricio Funes, a former journalist who didn't take part in the fighting and governed largely as a centrist.
The new president promised to focus on one of the country's biggest challenges: gang violence that has made El Salvador one of the world's most dangerous countries. He said he personally will head the System of Citizen Security.
Security "requires that we work together against organized crime, drug traffic, extortions and all expressions of violence," he said.
To spur development, Sanchez Ceren said he was in talks to bring El Salvador into the Petrocaribe program under which Venezuela provides subsidized oil to countries in the region.
But the new president has said he intends to govern less like Venezuela's socialist leaders than Uruguay's folksy Jose Mujica, a former guerrilla who gives away most of his presidential salary, drives a 41-year-old Volkswagen and never wears a tie.
Sanchez Ceren has promised to maintain good relations with the United States, where hundreds of thousands of Salvadoran migrants live. The U.S. dollar is El Salvador's official currency.
One of 12 children born to a carpenter and a food vendor, Sanchez Ceren became an activist in the teachers union as a youth. As bloody repression of union leaders grew in the 1970s, he gravitated toward the rebel movement, finally heading into the mountains as a guerrilla by 1978.
He rose to become one of the rebels' five top commanders under the nom-de-guerre "Comandante Leonel Gonzalez" and served as a negotiator in the 1992 peace accords.
The Associated Press
Posted by Duane Campbell at 9:12 PM