If We Do Not Vote- Dolores Huerta 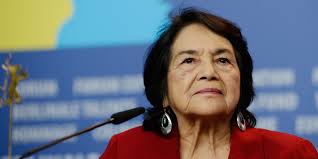 Dolores Huerta, who co-founded United Farmworkers with Cesar Chavez and who is an Honorary Chair of Democratic Socialists of America, spoke during a news conference Tuesday morning Nov. 10, before the Republican candidates debate  in Milwaukee  and said it's "really unfortunate" that GOP leaders are trying to win by attacking innocent people. 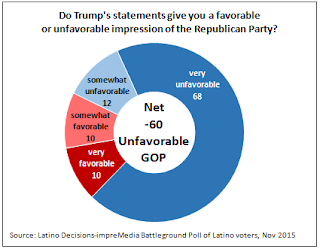 Huerta has led movements for organizing  union rights and  social justice  since the founding along with Cesar Chavez, Philip Vera Cruz and others  of the United Farm Workers (UFW) union.  She continues through her current work in supporting union democracy,  civic engagement and promoting Latino Voter participation.
Organizing Latino voter education and outreach is an important part of defeating Republicans in 2016.  And, it is working.

Huerta calls Donald Trump the face of the Republican Party, and accuses him of dehumanizing Latinos.  With organized work, GOP positions  on immigration and union rights may sink Republicans in the 2016 elections.

Huerta says Trump’s  primary opponents are no better.
"When we think about people like Rubio and Ted Cruz, even Jeb Bush, who speaks Spanish, they may have a Spanish last name -- but they do not have a Latino heart because they don`t care about immigrants. They don`t care about our community," Huerta said.

These protesters say Latino voters could swing this swing state next fall.
Nov.
"If we do not vote, the haters will win, and we cannot allow that to happen," Huerta said.

New polling released by impreMedia and Latino Decisions finds that the GOP's image among Latino voters has significantly deteriorated since 2012.

The Milwaukee protest was organized by Voces de la Frontera Action, and the Fight for $15 campaign.

Dolores also participated in protests prior to the Republican debates in Denver, Colorado in October.
http://antiracismdsa.blogspot.com/2015/10/dolores-huerta-latino-community-must.html

Posted by Duane Campbell at 3:51 PM