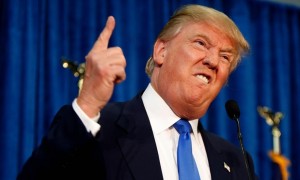 No change in policy directions he has advocated this year.
Calls current policy and “open door” policy. Which it is not.
Claims undocumented are treated better than U.S. vets. They are not.
Accuses Obama and Clinton of, surrendering the safety of U.S. citizens to an open borders policy.  Which is false.
Calls Hillary Clinton’s immigration plan amnesty.  Which it is not.
Claims that Mexico will pay for the Wall.  Mexico’s President denies this.
Would form a new task force in ICE to speed up deportations.


Would end DACA and DAPA.  Deferred Action for Childhood Arrivals.


Join us in a campaign to register and get out the vote.