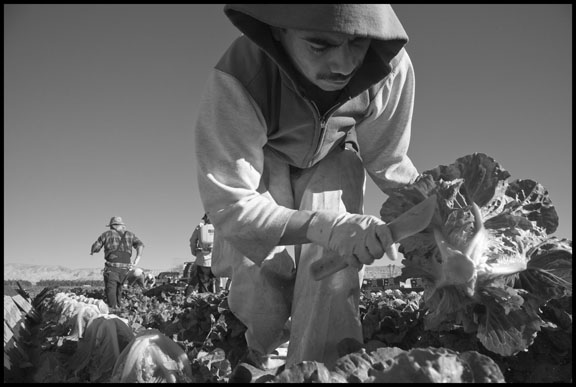 A farm worker harvests romaine lettuce near Mecca, in the Coachella Valley, where the temperature this summer reached 115 degrees. Workers cutting lettuce in this crew are paid by the piecerate, and work so fast they are almost running through the field, bent over double all day.


The fight for farm worker overtime is going down to the wire in California's current legislative session, which will adjourn at the end of August. And as Assembly Bill 1066, which would require it, moves through the legislature, Jewish and African American organizations have made a commitment to win the votes it needs for passage.

A bill that would have phased in overtime pay for farm workers, Assembly Bill 2757, passed the State Senate earlier this year, but then failed to pass the State Assembly in a vote on June 2. Since then a new bill, AB 1066, has progressed through the Senate's Appropriations Committee, and may be sent to the Assembly within days.

The bill would then need to pick up the four votes by which AB 2757 failed in June. They will have to come from either the eight Democrats who voted "no" or the six who failed to vote at all.


Both Jewish and African American organizations are planning to win those votes. They point to the racism behind the exclusion of farm workers from New Deal-era laws that guaranteed most other workers overtime pay after eight hours of work in a day.

As Rabbi Aryeh Cohen notes in the Jewish Journal, "When FDR began to amass the coalition which would pass the Fair Labor Standards Act in 1938, Southern Senators, Senators from the Jim Crow, slave-owning former Confederacy, refused to sign on unless worker protections for domestic workers, and agricultural workers were not included. It was no coincidence that these workers were almost all African-Americans. The country, and our state, has begun to address these injustices. There is now a domestic workers' bill of rights, and agricultural workers are now paid minimum wage (which will gradually increase to $15 an hour). The final hill is overtime wages. This is the last vestige of this racist holdover."

The exclusion of African Americans was highlighted in a letter from Alice A. Huffman, president of the California State Conference of the National Association for the Advancement of Colored People (NAACP). "The enactment of the Fair Labor Standards Act of 1938 excluded farm workers from wage protections and maximum hour standards," she said. "During the time this law was put into place, there was a large population of minorities who were indeed farm workers, and for the last 78 years California has failed to bring equality in our workforce. This can no longer be justified or tolerated."

Growers have argued in AgAlert, the weekly newspaper of the California Farm Bureau Federation, that "the higher cost of providing overtime pay-particularly when coupled with scheduled increases in the state minimum wage-would force farmers to reduce employee work hours to control labor costs."

The phase-in sections of the bill are intended to allow growers to make the transition gradually. And since they have complained that they also have to raise wages to comply with new minimum wage requirements, AB 1066 allows the Governor to suspend the overtime provision. But he can only do so by also suspending the popular minimum wage increases at the same time. That might prove politically very difficult for the current Democratic governor.

Faith groups have already begun meeting with some of the 14 Democratic holdouts. Rabbi Jonathan Klein of Clergy and Laity United for Economic Justice went with two other Southern California rabbis from the Religious Action Center of Reform Judaism to meet with the staff of Assemblymember Richard Bloom. Bloom, whose district includes Santa Monica and Beverly Hills, did not cast a vote on AB 2757, which was the equivalent of voting no.

"What we got was uncertainty," Klein reports. "They said there were no studies about it and that it might lead to a drop in the economy. But Bloom voted for increasing the minimum wage, which is a much bigger economic challenge, so what sense does that make? The growers have a lot of money, and I think legislators are afraid of it."

A bill guaranteeing overtime for domestic workers, who were also excluded from the Fair Labor Standards Act, is proceeding through the legislature at the same time as AB 1066. The Domestic Workers Bill of Rights, which enacted the overtime requirement, was passed three years ago. But it expires this year if the legislature does not act to renew it. Assembly Bill 1015 would restore the requirement and make it permanent.

In a recent march in Sacramento, domestic workers, their children and supporters drew a parallel between their situation and that of farm workers. They lobbied Democratic legislators, who almost universally spoke out strongly in favor of requiring overtime for domestic workers. Some Democrats, however, were silent about farm workers, and had voted against farm worker overtime in June.