Mexico's Teachers Union Stand Up to Bullets and the Government 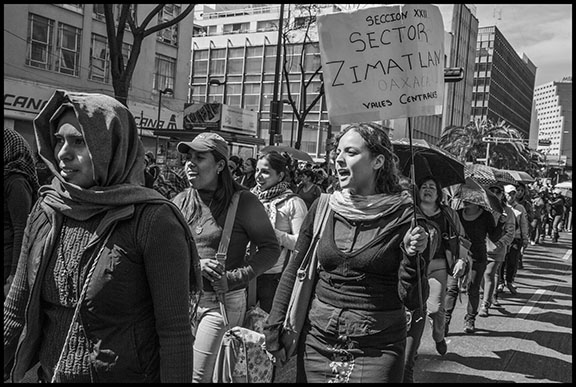 Teachers from Zimatlan, a town in the central valley region of Oaxaca, march in Mexico City to protest the federal government's corporate education reform program. The teachers belong to Sección 22, Oaxaca's teachers union. The march was organised by the National Coordination of Education Workers (CNTE), and brought teachers from all over Mexico to the capital to protest.


On Sunday, 19 June, demonstrators blocked a highway - a common form of protest in Mexico's southern state of Oaxaca - after the federal government arrested leaders of the state's teachers union. Heavily armed police then fired on teachers, students, parents and supporters. Nine people were killed, and many more were wounded.

Nochixtlán, the town where the massacre took place, has since become a symbol of the resistance of Mexican teachers to corporate education reform. In the United States educators quickly responded to support their embattled Mexican colleagues, condemning the attacks and calling for the release of the imprisoned unionists.

These events were set into motion a week earlier, when Rubén Núñez - head of Oaxaca's Sección 22 of the National Union of Education Workers (SNTE) and a national leader of the National Coordination of Education Workers (CNTE or Coordinadora, a group within the SNTE organized in the late 1970s) - was arrested as he left a meeting in Mexico City. He was then flown a thousand miles north to Hermosillo, Sonora, to a high-security federal lockup.

The union officers were accused of accepting dues given voluntarily by teachers across Oaxaca. Sección 22 has had to collect dues in cash for the last year, since federal authorities froze not only the union's bank accounts but also even the personal ones of its officers. The government called dues so collected "funds from illicit sources."

Five other union leaders have been imprisoned since last October. Luis Hernández Navarro, a former teacher and now opinion editor for the Mexico City daily La Jornada, calls them "hostages".

"Their detention is simultaneously a warning of what can happen to other teachers who continue to reject the [federal government's] 'education reform,' and a payback to force the movement to demobilise," he says.

On 19 May, Education Secretary Aurelio Nuño Mayer announced that he was firing 4,100 teachers from the CNTE stronghold states of Oaxaca, Guerrero, Chiapas and Michoacán for not having worked for the days when they were on strike.

One much-hated provision of the federal government's education reform requires teachers to take tests to evaluate their qualifications. Those who do not get good enough marks are fired. Thousands of teachers have refused to take the tests.

Earlier on 22 March, Nuño also announced a measure that would spell the end to Mexico's national system of teacher training schools, called normales. Since the Mexican Revolution (1910-1920), the normales have been the vehicle for children from poor families in the countryside, and from the families of teachers themselves, to become trained educators.

Guerrero's normale school in Ayotzinapa was the target two years ago of an attack that led to the disappearance and possible murder of 43 students, which has since galvanized Mexico.

Oaxaca became a target of repression because Sección 22 proposed its own alternative education reform over six years ago. It concentrates on respecting indigenous culture and forging alliances between teachers, students, parents and their communities.

For several years the union used its political strength to implement its program, rather than that of the federal government. Observers like La Jornada's Navarro believe that the federal government sees defeating Sección 22 as the key to forcing acceptance of its corporate education reforms instead.

After the enormous public outcry following the shootings in Nochixtlán, however, demonstrations against the federal education reform spread across the country. A protest march in Mexico City, organised by the left-wing MORENA party (National Regeneration Movement) headed by former mayor Andrés Manuel López Obrador, drew over 100,000 participants. Highways were blocked in several states.

Protests were also organised by teachers in the United States, including pickets of the Mexican consulates in Los Angeles, San Francisco and Chicago. A statement read by Lita Blanc, president of United Educators of San Francisco, announced a campaign to convince the US Congress to suspend military aid to Mexico "until the Mexican government stops these massive abuses of labor and human rights."

In Chicago demonstrating members of the Chicago Teachers Union made a video in which they chanted, "We are all Oaxaca!"

Formal protests and calls for freeing the imprisoned teachers also came from Josh Pechthalt, president of the California Federation of Teachers, Eric Heins, president of the California Teachers Association, and Dr. Lorretta Johnson, secretary treasurer of the American Federation of Teachers (AFT). Pechthalt asked all the union's local chapters in California to join the demonstrations and write to Mexican President Enrique Peña Nieto.

"We are all facing the same attacks," he told them. "The same corporate interests in both of our countries seek to privatise public education, undermine our ability to function as professional and socially-responsible educators, and end our right to unions and collective bargaining and action."

In Mexico, the Peña Nieto administration was forced into negotiations with the CNTE, but said that changes in its education reform program weren't up for discussion. Enrique Enríquez Ibarra, head of the Mexico City teachers union, responded that teachers would not back down and would keep developing an alternative democratic education plan. Demonstrations and strikes would continue, he said, until "all our fired colleagues are returned to their jobs, their lost salaries paid, and our bank accounts unfrozen."

Trains were blocked leading to Michoacán's main port of Lázaro Cárdenas, and the state's governor then met with the CNTE. Highways in and out of Chiapas' capital Tuxtla Gutiérrez, Guerrero's capital Chilpancingo, and Tabasco's capital Villahermosa were blocked as well.

Amanda, a parent in Tuxtla Gutiérrez, told La Jornada that: "One of the main jobs of parents now is to protect the public schools during the teachers' strike." Other parents called for abolishing school fees and ending the government's education reform.

As protests mounted, the Secretariat of Public Education announced on 10 July that it would not proceed further with the firing of thousands of teachers. During a national day of protest on 16 July, secciones 7 and 40 of the SNTE in Chiapas occupied radio and television stations to inform the public of their reasons for opposing the federal education reform, and to condemn the shootings in Nochixtlán. Marches on the same national day of protest took place in Puebla, Jalisco, Hidalgo and Mexico states.

Finally two of the imprisoned teachers were released in mid-July - Aciel Sibaja and Roberto Abel Jiménez.

And as they sat in prison, Rubén Núñez and Francisco Villalobos were reconfirmed as general secretary and organisational secretary respectively of Sección 22 in the union's monthly state conference. "While recent dialogues between CNTE and the Secretariat of the Interior are promising," the AFT's Johnson said in her letter to the Mexican ambassador to the US, "their legitimacy is lessened as long as these leaders remain in prison."

Posted by Duane Campbell at 3:07 PM