(Dec 3, 2015 San Antonio, TX) "Latinos in Texas performed well in 2014 according to the 2014 Census CPS study after subpar performances in 1998, 2006, 2010. Indeed Latinos did what they hadn't done in more than a generation by increasing their electoral efficiency that is increasing their rate of voter turnout and number of votes cast even though their voter registration declined in 2014," said Antonio Gonzalez, President of the William C. Velasquez Institute.

"2014 was a bad year for Latino voting nationally, but not in Texas, as Latinos cast nearly 1.1 million votes their highest mid-term total ever and voted at over 48% -equal to their previous modern-era highs of 2002 and 1994 when Latino favorites Tony Sanchez and Gov. Ann Richards were running," Gonzalez continued.

In "open" Presidential Elections with competitive primaries Latinos in Texas have a well-known history of comparatively high participation. 2016 will be such a year.

"Given historic Presidential Election trends Texas Latinos may cast at least 2 million votes in Nov. 2016 for the first time ever and should breach the 3 million registered voter threshold also for the first time," analyzed Gonzalez. "The hot Super-Tuesday March 1, 2016 primary will bring out Latinos of all stripes from both parties, and this will catapult voter registration throughout the year in our community and high voting in Nov 2016," he said.

"Of course there are challenges as political parties have not invested much in the Latino vote in recent years but the 10 million strong Texas Latino community has enough resources and leadership to mobilize itself in March and November," Gonzalez continued.

"Recent trends have shown a mid-term drop off in Latino registration in Texas but the hot Presidential primaries and tradition of high Texas Latino voting in Presidential Elections in Nov. should compensate for that drop-off with young Latinos registering to vote thru the efforts on groups like Southwest Voter Registration Education Project (SVREP)," Gonzalez concluded. 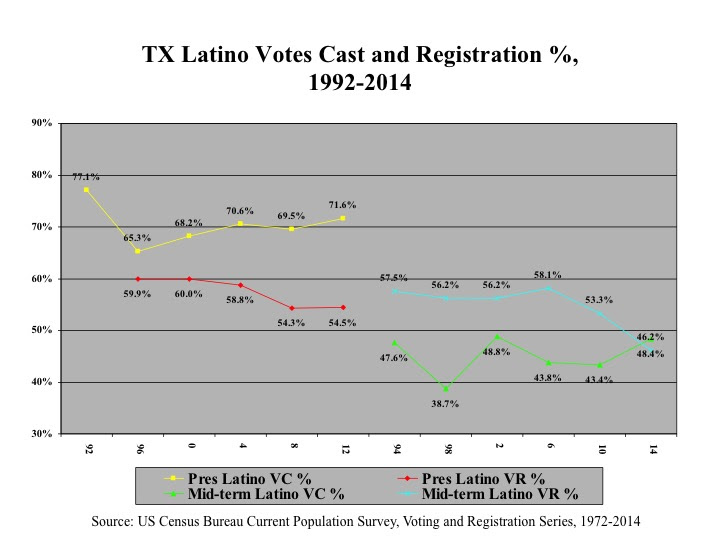