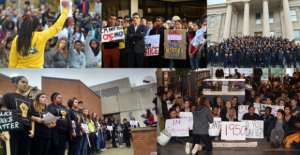 The deep-seated anger that caused the recent outbreak of student protests at colleges across the country has been building on campuses for a number of years due to ingrained racial issues that have been consistently glossed over and never thoroughly resolved. From Yale to Missouri and across the country to the University of Southern California, Occidental College, UCLA and Claremont College, angry minority students along with white student allies have stood up to raise their voices in opposition to random acts of intolerance at many of these schools. Such racially-related incidents against African-Americans and Latino students involve derogatory comments or outright insults, racially-themed fraternity parties, segregated social events and in many cases a hostile campus environment that makes many minority students feel unwelcome. The accumulated effect of this pattern of everyday racial slights has finally ignited the simmering anger of many of these students who have finally declared that they would no longer put up with such ignorant and abusive behavior at their schools. Many colleges and their bureaucratic administrators have ignored racially-biased policies and incidents of bigotry for years and allowed them to persist without taking any thoroughgoing preventive nor remedial measures to eliminate them. This is called by school administrators as “keeping the lid on problems”. In this day and age, it is astounding that minority students who are trying to receive an education at our universities still have to experience racial insults, name calling and intolerant behavior by a certain sector of students. This intolerance exhibited by a number of white students is a direct reflection of their background and upbringing within a bigoted sector of our society whose traits have unfortunately been brought onto college campuses by them.
This increase in racially-related incidents has been labeled with a new social term called microaggression which could be described as a milder form of everyday racism or being racially insensitive in a more casual way. To those who are not on the receiving end, microaggresion is supposedly not as bad as macro or large-scale and blatant racial aggression. Many apologists for such unprincipled racial behavior believe that African-American and Latino students can easily avoid these micro-racial slights by simply ignoring them. However, racial harassment, stereotypes and insults whether large or small are still racism and no one in 2015 needs to endure such irritating incidents and harmful behavior whether it be at work or school.
A self-righteous and kneejerk reaction from the political right
There has been a vocal backlash against these student protests from many on the political right along with their media allies. These are people who as white students were most likely sheltered and never had to experience any type of racial slights or ethnic barriers. Many of these far-right critics have expressed condescending comments about the rash of racially-related incidents aimed at minority college students as well as against females  who have experienced sexual assaults on campuses. According to these critics these incidents are

Both the right-wing media and GOP candidates have attacked the students & defended the status quo.
simply a part of life and that most students tend to be “spoiled and need to be tougher and have a thicker skin”! These young people who are standing up and speaking out against racial intolerance, ethnic slurs or sexual assaults on campuses are being verbally attacked with a form of reverse psychology by right-wing propagandists in order to slander and undermine their principled efforts. These regressive media commentators along with the intolerant statements made by most Republican presidential candidates blame the victims and point a finger at the students as being the ones responsible for supposedly creating and exaggerating these problems at their schools.  These biased comments are aimed at covering over the real problem which is the backward culture and ideology that still spawns and condones this existing bigotry at many colleges. A number of conservative professors and alumni at certain schools have also led a coordinated attack to tarnish the protesters and their community supporters. They allege that the student’s grievances are artificially created due to an extreme form’ of political correctness and an opposition to freedom of speech that is being practiced by them. For these conservatives, their distorted version of freedom of speech means having the right to hurl bigoted insults and stereotypes at minority students and to hold racially-themed events. Other commentators on the political right have also joined in and lashed out at what they term “self-righteous and privileged” students who are unappreciative of their opportunity to attend college and who are merely whining. These ethically-warped arguments by the conservative establishment are intended to defend the structural racism that has been rooted for decades within the traditional university system. In addition, their hollow criticism that these young people are thin-skinned whining children of privilege is simply an underhanded attempt to blemish and undermine these justified student protests and defend the racially structured status quo and profitability of the university system.
The past struggles to integrate the colleges only dealt with the symptoms
During the 1960’s and 1970’s, the principal struggle of the college student movement was to break down the traditional barriers of legal segregation that had historically excluded minority students from many campuses. This was carried out at that time in conjunction with opposition to the Vietnam War. The intense struggle against legalized segregation was aimed at government-sanctioned policies that for

The demand for the right to an education now includes the right to be free from racism on campus.
decades had restricted or made it difficult for students of color to gain entrance into schools of higher learning. Such institutional racism and its restrictive laws resulted in exclusionary de jure policies and processes that limited minority enrollment along with access to needed student services. In response, minority students during this period organized and formed student groups that struggled against the university systems in order to pressure them to open up admissions and create programs to recruit more students of color and implement campus programs to retain them. Many of these student organizations ranged from MEChAs, Black Student Unions, Puerto Rican student groups, Asian Student Unions and the assistance of white students from Students for a Democratic Society. Hard-fought battles were waged against the long-existing white supremacist structure at both public and private universities in order to make their resources available and relevant to minority students and the surrounding community. These student demands were in contrast to the traditional university role of servicing corporations and merely

Students at USC demand an end to racially-related incidents and increased diversity.
creating different colored clones as future employees in exchange for huge financial donations. Other key issues that were struggled for were the establishment of ethnic studies programs and affirmative action policies in order to expand the university’s outreach to minority students, strengthen their retention and develop a certain amount of diversity on campuses. There is an interrelated external and internal aspect to these ongoing racial problems at colleges across the country. The first stage of campus protests during the civil rights period dealt with the external and more blatant government-sanctioned racial aspect. This meant dismantling the legality of segregated schools, any existing restrictions, antiquated policies and exclusionary practices that denied large numbers of minority youth the access and right to a higher education. This first stage was essentially victorious as most racially restrictive barriers fell and more equitable policies were put in place except for the lingering and contentious issue of affirmative action which is once again being taken up by the US Supreme Court. However, the internal aspect of this problem still persists within the organizational structure of many colleges and still needs to be dealt with. It is comprised of a culture of long-embedded racial attitudes and policies of neglect, exclusion and even hostility by many administrative bureaucrats and faculty.
The second stage of confronting and rooting out structional racism has arrived
This internal and persisting structural racism with its deeply-rooted  policies and strata of biased administrators was not systematically rooted out during the 1970’s and especially at many of the private universities which are primarily profit driven. Thus, these institutional biases and inequitable policies continue to create a harmful learning environment as they are still ingrained within the mentality of many staff members at a number of colleges. At these affected schools, a strata of entrenched and highly paid bureaucrats are used to

Claremont College students protest against an official and for an end to racially-themed events.
implement and defend outdated policies that ignore the urgent need to expand minority outreach and recruitment, enhance diversity programs on campuses and implement pro-active policies to defuse racial problems by promoting intervention and student dialogue. Thus, a second stage of protest and pressure is now necessary to replace the discriminatory attitudes and biased policies that were not flushed out during the period of the 1970’s. These outdated policies remain as obstacles which hinder the prevention and resolution of racially-related incidents at campuses across the country. Many present-day college presidents and administrators who ignore this recurring pattern of bigotry on their campuses and simply look the other way are in fact encouraging the continuation of this noxious behavior and essentially promoting a breeding ground for racism. Amazingly, our institutions of higher learning which are supposed to encourage and motivate logical inquiry and a higher level of conceptual thinking and civilized behavior, are being attended by a number of misguided students who express racial insensitivity and shameless bigotry in both words and deeds. These traits could only have been instilled in them by their families, communities and former high schools who influenced their thinking. What is particularly unfortunate is that many of these same college students who espouse these backward views and behavior will eventually become the future leaders within

UCLA students demanded an end to racially-themed parties on campus and against further tuition hikes.
corporations, government and even schools where they will continue to perpetuate and spread their harmful biases. Those who oppose social change and a defense of basic rights and progress will wail in right-wing unison that these student protesters don’t appreciate America and are overly sensitive whiners who are motivated by political correctness. In reality, it is the protesting students who presently occupy the moral high ground in defense of diversity, civilized behavior and tolerance against a decaying, but still robust and entrenched racial bias that continues to exist within many of the university systems and among a segment of their students. It is the remnants of this traditional culture of intolerance along with its buffer of bureaucratic defenders that must be exposed and rooted out of these institutions once and for all through the implementation of thoroughgoing and concrete methods of pressure and change. Throughout all of these protests, the basic and underlying demand that most minority students have stood for and support is the right to be able to attend college in an equitable learning environment, receive a qualitative education and be treated in a decent and respectful manner.
Copyright, December 9, 2015: Jimmy Franco Sr.
Facebook: JimmyLatinopov
See also:  https://sites.google.com/site/chicanodigital/home/faculty-retention-at-csus--2011
Posted by Duane Campbell at 8:01 AM