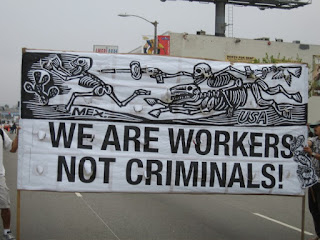 In 2016, we need to stop leaving people behind. It doesn’t serve our movement to use corrupt messaging that serves the needs of those in power. It divides our community into those who are deserving and those who are not and throws other oppressed communities under the bus.
It’s time for us to step up our words and our actions and drop these phrases from our own movements. Let’s end the divide-and-conquer tactics of the state and commit to liberation for all of our people.

1. We are a nation of immigrants.

The United States of America is a settler colonial nation that has been built upon the lands and the genocide of indigenous people.

2. This country was built by immigrants.

This country was built by the slavery of African people and the exploitation of oppressed people from across the world.

3. We are not criminals.

We become “criminals” the moment we set foot on U.S. territory. Our poverty, our nationality and our immigration status are profiled and criminalized and we are always “suspect” as we struggle to survive inside a racist nation that persecutes us. Many of us have made mistakes that have been highly criminalized: does that make us any less deserving to be with our loved ones? Even when we try to follow the rules set for us, we aren’t protected from the deportation machine. Millions of “law-abiding” immigrants have gotten deported. Respectability politics doesn’t keep our families together in the face of white supremacist systems and logics.

4. The borders are already secure.

Describing the Southern border that has claimed the lives of thousands as “secure” is wrong. It is a death trap. The border has destroyed and continues to threaten the sovereignty of indigenous peoples in the border region Further border militarization causes more suffering and death, period.

Then whose fault is it? Is it the fault of parents who sacrificed everything? The sole responsibility lies on free trade agreements that decimate economies in the Third World, U.S. imperialist wars and puppet governments imposed by the U.S. and many other predatory U.S. foreign policies at the root of the fault.

6. We need to fix the broken immigration system.

You cannot fix what is rotten to the core. The system is not broken—it was designed this way. Current immigration enforcement policies are an expansion of the rampant criminalization of people of color and serve to feed the mass incarceration beast, especially private prison companies which lobby for policies and laws that fill their coffers at the expense of our people.

7. If only we had comprehensive immigration reform.

CIR is a grand compromise that has been used as a political football, politically leveraging the suffering of our people for both parties. Past immigration reform demonstrate this clearly. In 1986, we were criminalized working without documents for the first time. In 1996, the blueprint was created for the record deportations we live with today: mandatory detention, bans from the country and the creation of police and ICE collaboration. More recent CIR proposals expand criminalization and further border militarization.

The crisis is not new. We need to place ourselves in the context of history and the white supremacist violence that has terrorized people on this continent since 1492. Forced migration has existed in many forms for centuries. Migrants have been in crisis for decades, if not centuries, of exploitation and criminalization.
A few facts: Black people were slaves for over 250 years. Exploited Chinese labor built the transcontinental railroad system for almost a century that made this country filthy rich. September 11, 2001 created Homeland Security, which led to the hyper-criminalization of migrant people and spurred surveillance and hate against Arab and Muslim people as well as never-ending wars in our name.

We are refugees of climate change, the global economy, war and violence. We came here because we had no other option. We don’t believe that work is what defines someone’s worth as a human being or justifies their existence. Social safety nets exist for a reason. Counter to the stigma, receiving welfare has nothing to do with laziness. Those are vicious racist myths that work to divide us and weaken our movements.
***
Carlos García is the director of Puente Arizona.