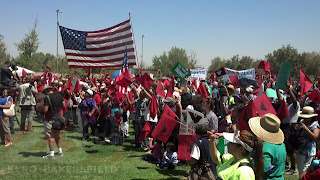 
The large car and bus caravan highlights the urgency for immigration reform in the immigrant, Latino, and Asian communities who have marched, mobilized, and voted in support of an overhaul for years.
A group of 40 protesters gathered in front of Congressman McCarthy's office to voice their concerns about immigration reform.  The group, 'We the People California Crusader', wants illegal immigration stopped.
The group said immigration reform could hurt Americans who are already out of work.
"We want McCarthy to hear the voices of his constituents, not groups from all over California who came up here on a bus," said Robin Hvidston.
The group held signs that said "stop immigration reform" and American flags.
The action they want McCarthy to take is focused on homelessness and veterans for living in poverty.
"We don't need new immigration laws we need the laws that we already have enforced,"said Ralph Roples.
Congressman Kevin McCarthy released this statement:

“I think that it is always healthy to have a dialogue on the important issues of the day, and I welcome folks coming to visit Bakersfield.  While I have met with many groups across the spectrum of the immigration reform debate, in the end, I value the input of my constituents in the 23rd Congressional District most. I have long said that our immigration system is broken, but rather than take up the Senate bill, the House will move in a step by step approach that first secures the border.”  -Congressman Kevin McCarthy

Posted by Duane Campbell at 3:47 PM