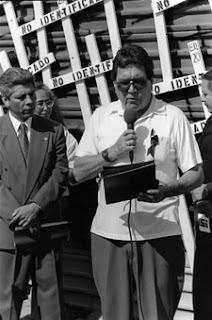 The California Latino Legislative Caucus held informational hearings on current efforts on immigration reform on Aug.27,2013, in Sacramento, California.  Speakers from community groups, labor unions, growers, and Dreamers, among others, presented the major issues and many of the problems with SB 744, the current federal proposal.  Enrique Moreno of Border Angeles described terror on the border. There were clear divisions among the groups about the current bill for its many repressive characteristics.  Mike Garcia of SEIU the Service Employees International  was  one of the more active advocates  for the bill saw the passage of the amended S744  as a major victory for working people. Conservative Republican forces in the U.S. Senate amended the bill to achieve a massive   $46  Billion  expansion of border control and  enforcement.  Moreno testified that this would only lead to more deaths on the border.
California Governor Brown joined the hearing for a short while and clearly endorsed efforts at comprehensive reform and promised to work with the legislators to assist with related state issues.
You can view the entire hearing with its many excellent and well informed speakers here. http://www.youtube.com/watch?v=h3dGzqkNhqQ&feature=player_detailpage
It is well done and well informed.


So far in fiscal year 2013 the Obama administration has deported more than 311,000 undocumented according to a report by the Bureau of Customs and Border Protection (ICE) requested by News Univision.com.
From October 1, 2012 to August 3, 2013 the agency deported undocumented immigrants 311.387, 176.281 of them criminals (56.6%) and non-criminal 135.106 (43.3%).
A number of  repressive bills are being prepared in the Republican dominated House of Representatives.   Rep.  Bob  Goodlatte,  (  R. Virginia – 6th) Chair of the House Judiciary Committee has a bill HR 1773 which would re-establish the prior bracero program (guest workers) with many  of its worst features, tying the work visa to a single farm corporation, company housing, controlled wages, a external “savings” bank, and more.  This bill has already passed the House Judiciary Committee.
The House Republican  leadership  approach is to produce a series of bills on separate issues, not a comprehensive bill. They plan, for example, to get a majority vote on the enhanced border enforcement , drones,  and prison growth, while knowing that an independent bill offering a reasonable pathway to citizenship would fail in the Republican House.   By dividing up the issues they intend  to win on the repressive measures and block comprehensive  immigration reform such as that favored by community groups, labor  and DSA.
Since the bill is so bad, and likely to get worse, why then do some labor leaders argue that the bill should be supported ?  Well, it is something.  Both SEIU and UNITE/HERE among others, have hundreds of thousands, perhaps over a million workers who hope for legalization.  The argument is that we should get them through the pipeline – even at the cost of a repressive bill.

Posted by Duane Campbell at 4:36 PM