Join DSA at the March on Washington

“You can’t talk about ending the slums without first saying profit must be taken out of the slums. . . . There must be a better distribution of wealth . . . and maybe America must move toward a democratic socialism.” 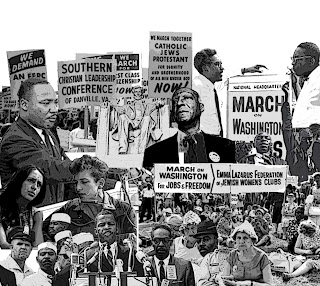 Why We March
DSA is an official partner organization sponsoring the August 24, 2013 March on Washington 50 years after activists, led by Martin Luther King, Jr., marched on Washington for Jobs and Freedom.  That march, and the years of organizing which preceded it, built public pressure and helped lead to landmark civil rights legislation and later the expansion and protection of voting rights.
Democratic socialists Bayard Rustin, Walter Reuther and A. Philip Randolph (above)


helped organize the March on Washington for Jobs and Freedom 50 years ago.
They knew that ending legal segregation and winning political rights for African Americans were essential, but not sufficient, to ensure justice and freedom for all. Without access to good education, to health care and above all to decent jobs that paid living wages, the vote was not enough.


Today, as the recent Supreme Court decision has emboldened racists and reactionaries in many state governments to roll back the electoral influence of African Americans and Latinos, we are marching again to defend the gains in voting rights of the last 50 years. These rights are essential to overturn Stand Your Ground laws and to end the mass incarceration of young people of color and the detention and deportation of undocumented immigrants.
More than ever, the full exercise of political rights depends upon basic economic and social rights that are under savage attack throughout the country. As austerity and perverted national priorities cripple public budgets, schools are closing and higher education is so expensive that most students incur massive debt in order to pay for it. Head Start programs are being shut down. The budget sequester is cutting extended unemployment benefits and denying Medicaid and housing assistance to families in desperate need.
Even as we welcome the extension of marriage rights, we know that discrimination on the job against the LGBT community continues. We know that the hard-fought gains of women for reproductive rights are being eliminated in many states. And millions of hard-working immigrants cannot get the legal status they need to emerge from the shadows into the full citizenship they deserve.
This is not the society that we, along with Martin Luther King, dreamed of. We reject its growing economic inequality. We are appalled that African-American and Hispanic communities have been ravaged by foreclosures. We support the organization of the tens of millions of workers who take the only jobs available to them in fast food and other low wage industries, ones that do not pay living wages or decent benefits to support a family.
We march to realize the Dream. Every day, we will work for the Dream we share with immigrant Dream Act activists, the Moral Monday movement in North Carolina and those who Defend the Dream in Florida. We shall overcome!

Power concedes nothing without a demand !    DSA will have a contingent of marchers as well as a post-march reception near the Capitol.   DSA  Meeting Point between 8:00am and 11:00am – Jefferson Dr. SW at 14th St. (2 blocks from Smithsonian Metro stop). This is on the Independence Ave (south) side of the National Mall. We will meet with DSA banners to march together. Bring your own signs, too!
DSA Reception from 2:00pm and 5:00pm - Hunan Dynasty Restaurant.
Posted by Duane Campbell at 11:10 AM