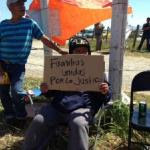 As workers walked past fields of strawberries and blueberries into a negotiation meeting this morning with Sakuma Brothers Farms, Inc. management, they were told to accept management's terms or lose their jobs.  This threat comes amidst a heated strike of over 200 immigrant farm workers at the Burlington, WA farm which is just north of Seattle.  It is the second strike the workers initiated in the last two weeks over a list of demands over wages, dignity, and respect.
The strike started after the firing of farm worker Federico Lopez on July 10th.  Lopez and his coworkers believed he was targeted for bringing up grievances with his superiors.  Some of the workers were listening to an interview of Rosalinda Guillen on a Spanish-language radio show on a local radio station.  They decided that they wanted her to assist them with their struggle at Sakuma Brothers Farms.
Rosalinda Guillen works for Community to Community Development [1], a farm-worker and food-justice organization located near the Canadian border in Bellingham, WA.  She began working as a farm worker in Washington State in 1960, eventually joining Cesar Chavez's United Farm Workers (UFW).  She became a leader in the bitter eight-year campaign to organize the workers at the Chateau Ste. Michelle Winery [2] in the state which ended with a contract and victory for the workers in 1995.  A rallying cry for the UFW in its early days became "Viva la Huelga!" as the strike and other disruptive tactics were often deployed by the workers in an industry where there was little labor protection.


While the poor acquiesce to being poor, while the oppressed acquiesce to being slaves there will be no liberty, there will be no progress.  But when discord tempts the hearts of the humble, when it comes and tells them that while they suffer their masters rejoice, and that we all have a right to rejoice and to live, the passions then blaze and they destroy and create at the same time, ravage and cultivate, demolish and build.  Blessed be discord!

The hearts of the humble of Familias Unidas Para la Justicia at Sakuma Brothers Farms are attempting to demolish the dismal conditions of their labor.  In doing this they are cultivating a newer and more democratic form of work through their strike.  "Viva la Huelga!" is the call of the hour.  And although victory currently hangs in the balance, there is much the labor movement can learn from these striking workers and the long tradition of struggle they come from in Oaxaca.


How You Can Help
Donate to the Workers Strike Fund!
Donate to the Sakuma Workers' Fund.  Go to www.foodjustice.org [8] and click on the "donate" button to the right of the screen; or send a check written out to Community to Community Development labeled "Sakuma Workers' Fund" to 203 W. Holly Street, Ste. 317, Bellingham, WA 98225.
Spread the word!
Get the word out that Sakuma is not willing to support workers!  Call the farm at 360.757.6611 and urge them to change their practices and support the current farm worker rights committee!