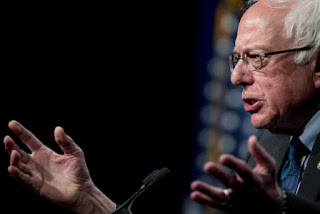 ON THURSDAY MORNING, Sen. Bernie Sanders dropped his long-anticipated immigration platform. Arguably the most ambitious of any Democratic presidential candidate’s so far, the plan goes beyond a general call for a path to legal status for immigrants and takes full aim at President Donald Trump’s racist policies at the southern border. Unlike any other candidate, Sanders calls for the break up of U.S. Immigration and Customs Enforcement and U.S. Customs and Border Protection, and to improve working conditions and labor protections for industries that rely on an immigrant workforce.
One piece of this is the Domestic Workers Bill of Rights, which would “provide domestic workers with at least a $15 minimum wage, strong protections for collective bargaining, workers’ rights, workplace safety, and fair scheduling,” regardless of immigration status.
“For too long, employers have exploited undocumented immigrants and guest workers to violate labor laws, skirt the minimum wage, and maximize their own profits,” the plan reads. “Large corporations target vulnerable communities as a source of labor and use their immigration status to retaliate when workers stand up for their rights.” 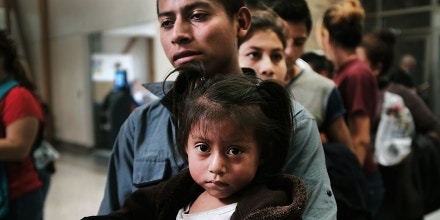 The release of Sanders’s plan comes after months of scrutiny from leftists and liberals over his immigration policy — long considered to be one of his primary weaknesses. His plan follows the common left positions on immigration, including reinstating and expanding the Deferred Action for Childhood Arrivals, or DACA, program; ending for-profit detention; and overturning the Muslim ban.
Notably, he also goes further than even his fellow progressive hopeful, Sen. Elizabeth Warren, in calling for full demilitarization of the border. To break up ICE and CBP, under Sanders’s platform, their functions would be redistributed to other federal agencies. Under a Sanders administration, “deportation, enforcement, border and investigatory authority would return to the Department of Justice,” naturalization and citizenship authority would go to the State Department, and customs authority would return to the Treasury.

Notably, Sanders also goes further than even his fellow progressive hopeful, Sen. Elizabeth Warren, in calling for full demilitarization of the border.

Warren, on the other hand, pledged in her immigration plan to “remake CBP and ICE in a way that reflects our values.” Her plan, titled “A Fair and Welcoming Immigration System,” which came out in July, calls for the decriminalization of border crossings, expanding DACA, and raising the cap on the number of refugees admitted to the U.S. She also put forth some signature ideas such as establishing an “Office of New Americans” to “draft a national strategy for integration” for new immigrants, which would include providing English, civics, and employment-focused classes.


Former Housing and Urban Development Secretary Julián Castro, who’s been struggling to keep his campaign afloat, is the only Latino candidate in the race and was the first to release an immigration proposal. His plan calls for splitting ICE in half and reassigning enforcement functions to other agencies, including the Department of Justice.
As president, Sanders’s plan says he would withhold federal contracts for employers found to be exploiting guest workers, end workplace raids, and implement measures to protect farm workers. Warren’s plan mentions the importance of coupling expansions of legal immigration with “real accountability on employers who break the rules, exploit workers, or don’t adhere to basic labor standards,” but detailed proposals related to workers’ issues aren’t as central to her plan as they are to Sanders’s.
Sanders also goes further in offering a time frame for developing a path to legal permanent status and citizenship for undocumented immigrants, setting it within five years. Warren and Castro support a pathway to legal status, but neither has offered a time frame.
Former Vice President Joe Biden, meanwhile, hasn’t released a detailed immigration platform, but came out against the decriminalization of border crossings during the second Democratic primary debate. At the July 31 debate, Biden disagreed with Castro, who defended his stance on decriminalizing border crossings, saying that immigrants “have to wait in line.”
“The fact of the matter is, you should be able to — if you cross the border illegally, you should be able to be sent back,” Biden said. “It’s a crime.”
Biden has also defended the Obama-era immigration policies that helped build our current deportation state. Univision anchor Jorge Ramos, one of the debate moderators, confronted him on this, asking, “Vice President Biden, as a presidential candidate in 2008, you supported the border wall, saying, ‘Unlike most Democrats, I voted for 700 miles of fence.’ This is what you said. You served as vice president in an administration that deported 3 million people, the most ever in U.S. history. … Are you prepared to say tonight that you and President Obama made a mistake about deportations? Why should Latinos trust you?”
After Biden dodged the question — giving an incoherent answer that somehow ended with a call for Congress to reauthorize the Violence Against Women Act — Ramos followed up, asking if Biden believes that he made a mistake with those deportations. “The president did the best thing that was able to be done at the time,” Biden replied. “How about you?” Ramos asked.
“I’m the vice president of the United States,” he said.

Earlier this year, Sanders faced criticism for his response to a question that perpetuated right-wing fearmongering regarding open borders.
“What we need is comprehensive immigration reform,” Sanders said at an Iowa town hall. “If you open the borders, my God, there’s a lot of poverty in this world, and you’re going to have people from all over the world. And I don’t think that’s something that we can do at this point. Can’t do it. So that is not my position.”
In response, progressives pointed out that the democratic socialist had parroted false nativist talking points about immigrants. As Daniel Denvir wrote for Jacobin in April: “Bernie’s track record on immigration is strong. But he currently lacks a bold vision for immigrant justice that identifies an immigrant-dense working class as a protagonist for progressive social and economic transformation today, matching the clear and compelling framing he uses to talk about issues like economic inequality.”
With his new plan, Sanders is finally refining his vision for immigrant justice.
Posted by Duane Campbell at 1:19 PM