Why Mexican Farmworkers Are On Strike 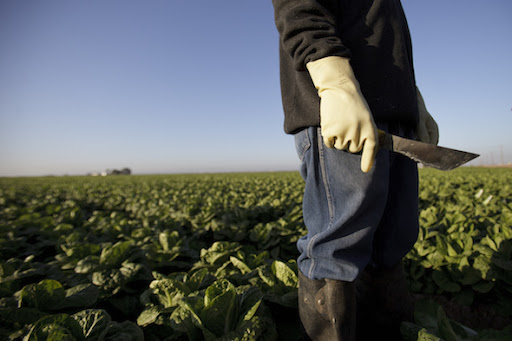 As many as 50,000 mostly indigenous workers have stopped harvesting produce for more than a week in protest of labor law violations. What they want is for their basic needs to be met, such as obtaining health care, getting overtime pay and vacation days, and being paid wages higher than the dismal $8 a day that most of them earn.

A farmworker holds his knife before beginning work near Holtville, Calif., earlier this year. The Mexican strike is big news among farmworker communities in the U.S. with ties to Mexico., AP / Gregory Bull,

The green Driscoll’s label on the organic berries that I buy each week are a comforting symbol of a family-owned company that got its start in California. Sometimes the berries are marked “Product of USA,” but more often than not, they are labeled as originating in Mexico. That is because Reiter Affiliated Cos., which sells berries through its affiliate BerryMex under the Driscoll’s label, grows much of its produce in Mexico. On its website Reiter claims to be “the largest fresh, multi-berry producer in the world and the leading supplier of fresh strawberries, raspberries, blueberries and blackberries in all of North America.” Now, the farmworkers picking many of those berries are on strike, demanding a change to the brutally impoverished conditions under which they live.

The strike, taking place in San Quintín, in the Mexican state of Baja California, came just in time for Farmworker Awareness Week. As many as 50,000 mostly indigenous workers have stopped harvesting produce for more than a week in protest of labor law violations. They have carried out bold actions, including blocking traffic on a major highway. About 200 workers were reportedly arrested over such actions and have complained of mistreatment at the hands of police. What they want is for their basic needs to be met, such as obtaining health care, getting overtime pay and vacation days, and being paid wages higher than the dismal $8 a day that most of them earn.

David Bacon, a longtime labor journalist and photographer and author of “The Right to Stay Home: How US Policy Drives Mexican Migration,” has visited the fields of San Quintín. He told me in an interview on “Uprising”that “all of the ranches ... are producing for the U.S. market, they don’t produce for the Mexican market at all. In fact,” he added, “they were started to supply the U.S. market especially with tomatoes and strawberries at a time when the only place in the United States that was growing and harvesting them was Florida.”

Years ago the sparsely populated San Quintín area was converted into an industrial agricultural center by growers who imported indigenous workers from southern states such as Oaxaca. Bacon compared the dozen or so ranches in the area to the maquiladoras, or factories, that sprang up along the Mexican side of the U.S. border. He described the conditions of the labor camps where workers live as “really awful and terrible.”

Starting in the 1970s many of Baja California’s workers began to cross the U.S. border through California into the Central Valley, and even to states like Washington. “These are all connected communities,” maintained Bacon, which is why the San Quintín strike is big news among farmworker communities in the U.S. such as Washington’s Skagit County.

Sadly, it is not very big news elsewhere in the U.S. When the strike began last week, the Los Angeles Times was the only English-language media outlet in the country to initially cover it. (Since then, a week later, The Associated Press and others have begun to report on the strike.)

L.A. Times reporter Richard Marosi deserves great credit for being one of the few mainstream reporters focusing on this under-covered issue. His December 2014 multipart exposé “Product of Mexico,” was the result of an in-depth investigation of the treatment of Mexican farmworkers at the hands of growers who distribute to U.S. markets. Marosi described “rat-infested camps,” some without functioning toilets. Workers routinely have their wages illegally withheld, and many face debt after being gouged by the overpricing of necessities sold at company stores. Pay is so low that it amounts to less than one-tenth of what U.S.-based farmworkers earn.


“The contrast between the treatment of produce and of people is stark,” wrote Marosi. The lack of U.S. media attention is partly why the mistreatment of the workers who pick our produce continues, says Bacon, because mainstream media tend to have a blind spot when it comes to Mexico, as well as to the struggles of working-class people overall. “We eat the fruits and the vegetables that these workers are producing,” explained Bacon, “[but] the workers themselves are invisible.”


But San Quintín’s farmworkers are refusing to remain invisible any longer. Using their collective leverage, they have stopped picking produce—at the peak of the harvest season—until they can negotiate better conditions and wages for themselves. Already there are some shortages in the U.S. market being reported. Time is of the essence for negotiations to be completed as strawberries, cucumbers and tomatoes start rotting unpicked in the fields.


After the mistreatment of San Quintin’s workers came to international light last December, growers pledged to fix the problems and created the International Fresh Produce Social Responsibility Alliance. But their promises for better housing, decent wages and health care have not yet materialized.

Bacon related that the workers “are negotiating with the state government,” rather than the growers directly, “because many of the conditions that they are complaining about are actual violations of Mexican law.” They want the government simply to enforce existing laws and force growers such as BerryMex, Del Cabo, Rene Produce and others to improve working conditions. They also want charges against those protesters who were arrested to be dropped. Marosi, who is in Baja California reporting on the strike, told KPBS, “They’re saying if there’s no progress, then they’re going to continue striking, and no one’s ruling out blocking the highways again.”


It is telling that the federal government in Mexico has completely ignored the strike. President Enrique Peña Nieto, according to Bacon, has “substantially weakened Mexican labor laws” through his major labor reforms after the last election. The reforms have helped employers hire temporary workers at lower wages and have been used as a “magnet to attract investment.”


Here in the U.S., the situation is not much better. Bacon clarified that “the workers in Baja California are part of a larger indigenous farmworker community that also exists in California.” The treatment of U.S.-based workers is only marginally better.

Poor treatment of the workers who pick our produce is no accident. It is a predictable outcome of a system designed to have a bottleneck controlled by fewer and fewer corporations, in which production is moved to the cheapest and most convenient locations and then exported where needed. Food is no longer a necessity—it is a commodity. And farmworkers, whether in Mexico, the U.S. or elsewhere, are exploited like any other workforce producing high-tech gadgets, mining precious metals or sewing designer clothing.

Fortunately, it has now become trendy to “know where your food comes from.” Ultimately it is the U.S. public eating the produce that Mexico’s striking farmworkers pick. We have to acknowledge that much of our food is harvested by the hands of people struggling just to survive. Bacon summed it up, saying, “we have to stop treating these workers as though they are invisible, as though their lives don’t count.”


Reposted from Portside.
Posted by Duane Campbell at 7:51 PM