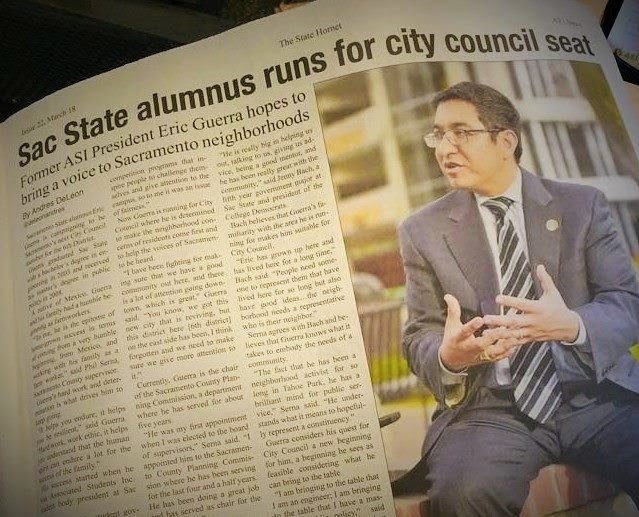 Eric has the endorsement of Los Rios College Federation of Teachers, the California Nurses Association, the Sacramento Progressive Alliance, and more.
One of My Priorities for District 6 -- Safe Streets, Safe Neighborhoods
Fight to ensure all District 6 neighborhoods receive their fair share of public safety funding.
Ensure that Measure U funds are spent wisely to increase and strengthen our police force and fire department.
Reinstate community policing like the POPS Program.
Work with neighborhood associations to strengthen and grow community visibility and our neighborhood watch programs.
‪#‎VoteEricGuerra‬ ‪#‎VoteApril7‬ ‪#‎District6‬
For those who live in City Council District 6.
On this Cesar Chavez Day I would like to thank the Sacramento State College Assistance Migrant Program that helped me transition from farmworker to the middle class.
From the Sacramento Bee editorial supporting Guerra:

Guerra, 36, has an impressive résumé, too. He has served as a California State University trustee, and on the Sacramento County Planning Commission for five years, the last two as chairman. He was a fellow in the office of then-state Sen. Gil Cedillo of Los Angeles, and is a policy analyst for Assemblyman David Chiu of San Francisco, a part-time job that Guerra says gives him the flexibility to be a councilman.

Guerra has the support of fellow county planning commissioners and six Sacramento City Unified School trustees. County Supervisor Phil Serna is a mentor.
What gives Guerra a slight edge is his undeniable passion to improve neighborhoods, making sure they share in Sacramento’s growth and prosperity. That’s crucial for a district and a city with still too many vacant lots, empty storefronts and residents struggling to make ends meet.
He honed his political skills in Tahoe Park, where he has lived for 18 years and where as neighborhood association president he aggressively lobbied during the city budget crunch to keep parks and pools open. He would be a valuable ally to Councilman Allen Warren – who has endorsed him and who represents Del Paso Heights and North Sacramento – to give the city’s blue-collar areas a strong voice on the council.
Guerra’s youth and energy would benefit the council, as would his background. Born in Mexico, he grew up in a migrant farmworker family in Esparto. Thanks to a federal program that helps migrant kids, he went to Sacramento State, became student body president and earned a bachelor’s degree in engineering and master’s degree in public policy.
While about 27 percent of Sacramento residents are Latino, only three Latinos have been elected to the council and none since former Mayor Joe Serna died in 1999.
Both candidates say that ethnicity is a factor in the campaign. It does matter, especially when the two candidates don’t differ much on the issues. They both opposed the city subsidy for the downtown arena and the “strong mayor” ballot measure, but support the independent redistricting commission and ethics code provisions that are being revived.
This is a diverse district, encompassing Little Saigon and traditionally white neighborhoods near Sacramento State. About 28 percent of residents are Latino. It would be fitting if its elected representative brings some diversity to the City Council.

Posted by Duane Campbell at 8:20 PM