Teachers to hold "Teach In" at Tornillo Detention Center 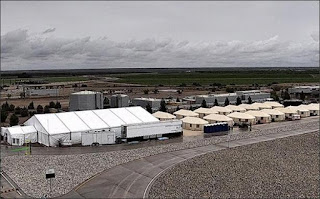 In February, educators will gather outside a massive detention camp for migrant children and stage a 24-hour "teach in."
The upcoming protest at the Tornillo, Texas detention camp is organized by Mandy Manning, the 2018 National Teacher of the Year, who teaches newly arrived refugee and immigrant students in Washington state. When she met President Donald Trump at the White House in a May ceremony, Manning gave him a stack of letters from her immigrant students. (She also wore buttons supporting women's rights, LGBTQ rights, and other political causes in a silent rebuke.)
Several other state teachers of the year are joining her in speaking out against the separation of families and child detention, Manning said. (One of those teachers is Ivonne Orozco, the 2018 New Mexico Teacher of the Year, who immigrated from Mexico as a child and then received protection by the Deferred Action for Childhood Arrivals program.)

This spring, the Trump administration began enforcing a "zero tolerance" immigration policy, which led to about 3,000 children being separated from their parents or other adults who had accompanied them in crossing the border. Those children were detained in federal detention facilities.
Trump reversed the policy in June after public outcry, and a federal judge ordered all separated children to be reunited with a parent. But the deadline for that order has long passed, and hundreds of those children still remain in federal custody.
There are about 2,800 minors currently at the Tornillo detention center, according to the Texas Tribune—a number that keeps growing. These teenagers were not necessarily separated from their families at the border this summer, but were detained coming from Central America to join their family members in the United States, the Associated Press has reported.
"It's our responsibility to continue to speak out against this atrocity until it ends," Manning said in an interview. "We have children who have done nothing wrong who are being imprisoned for an extended period of time. Every day that a child is in prison, that potential is diminished, and that's not OK. That's abuse, that's mistreatment."
She has formed a coalition—Teachers Against Child Detention—and said the group's work will come in three phases and will continue indefinitely until the children are all released and reunited with their families.
The teach in will take place outside the gates of the Tornillo detention camp (which was profiled by NBC News) sometime over Feb. 16-18—President's Day weekend. Manning said teachers, retired teachers, paraprofessionals, and other educators will deliver lessons about "what's happening and who these kids are" for 24 hours. The lessons will be broadcast live. Hopefully, Manning said, one educator from each state will attend the demonstration.
"We'd love to be able to go inside and do a day's worth of lessons and bring teaching materials and books for the kids so we can ensure that they're at least having some quality education," she said.
But if they're not allowed in, Manning said it is critical for educators to "raise our collective voice" and call for the government to properly educate the migrant children and ultimately release them.
While the children remain in custody, they are entitled to certain education services, as Education Week has reported. Department of Health and Human Services policy mandates that children receive a minimum of six hours of "structured education," in science, social studies, math, reading, writing, and physical education, Monday through Friday. Federal law also requires that these children receive an education that is appropriate for their needs, including English-as-a-second-language services.
In an emailed statement, an HHS spokesperson said that unaccompanied migrant children at Tornillo "receive educational services from instructors under the leadership of two certified principals." The students receive 3.5 hours of daily instruction time Monday through Friday, which can include English-as-a-second-language services, instruction in English, math, science, and social studies, and "self-guided study time," the statement said.
See also: Educating Migrant Children in Shelters: 6 Things to Know
Aside from the teach-in, Teachers Against Child Detention is asking educators across the nation to create short videos speaking out against child detention and post them on social media.
"As educators, we're mandatory reporters, which means we're required to report any suspected child mistreatment," Manning said. "There is a [large] amount of evidence to suggest there is mistreatment happening."
Also, Manning said she plans to collect children's books to hopefully give to the migrant children in the detention facilities. Students could get involved here, she said—they could pick their favorite book (and a Spanish-language translation) and write a note to the detained children.
Still, Manning hasn't yet received confirmation from the government that they would allow a donation of books. (If the donation is rebuked, Manning said the contingency plan would be to give them to community centers and schools in Tornillo.)
"Even prisoners in penitentiaries have access to books," she said. "We'd hope in a situation where children are being detained for not an actual crime, they'd be able to get books."
The government's treatment of migrant children has come back in focus this month, after the death of a 7-year-old girl from Guatemala who was in U.S. Border Patrol Custody. She died from dehydration, shock, and liver failure.
For Manning, this is a human rights issue, rather than a political issue.
"We see the value in every single child, and that's what this is about," she said.
Subscribe to Education Week

Posted by Duane Campbell at 4:42 PM