Another Congressperson on Our Side

Why We Need to Listen to Rashida Tlaib

Defending liberal democracy from Trumpism is not a distraction from what is really important. It is itself really important, as an end and as a means of further advancing a progressive agenda. 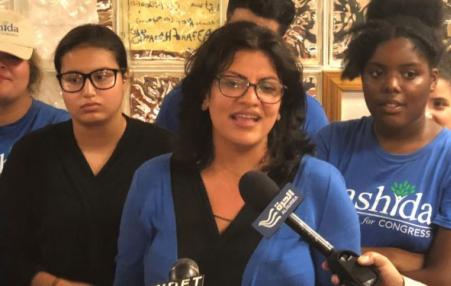 Rashida Tlaib is seen at her campaign headquarters in Detroit, Michigan, Aug.7 2018, https://commons.wikimedia.org/w/index.php?curid=75701495


Last week saw the swearing in of the new, Democratic-controlled Congress, the fruit of the “blue wave” that swept across the country last November. The 116th Congress has been rightly hailed as “historic” for its demographic diversity. The country’s first female speaker of the House, Nancy Pelosi, was re-elected, and a record number of women joined the ranks of the Democrats in Congress, including the first Native-American and Muslim-American women ever to serve in the House.

Less remarked by the mainstream media has been the ideological diversity of the newly-elected Democrats, who bring to the forefront of national politics not simply a broader range of “faces” but a broader range of ideas about public policy and social justice.

At the same time, the media have taken notice of two of most visible “faces” (and audible voices) of ideological diversity, Alexandria Ocasio-Cortez and Rashida Tlaib. Both are young women of color, one a Latina and one an Arab-American Muslim. But more importantly, both are members of the Democratic Socialists of America (DSA) who successfully ran very vigorous campaigns from the left of the party, and who have been outspoken in their support of progressive issues.


Ocasio-Cortez, 29, an extraordinarily telegenic and charismatic young woman who has received much media attention for her recent pronouncement that she supports a 70 percent tax rate on the highest income bracket of the super-rich, both as a matter of social justice and as a way to help finance the “Green New Deal” policies she has bravely and wisely promoted. Tlaib, 42, an equally telegenic and charismatic woman, who has not thus far received the attention lavished on Ocasio-Cortez, last week received even more attention, in connection with a comment she made at a public gathering on Thursday evening: “And when your son looks at you and says, ‘Momma, look you won. Bullies don’t win.’ And I said, ‘Baby, they don’t.’ Because we’re going to go in there, we’re going to impeach the motherfucker.”

Tlaib was of course immediately subjected to attacks from the right and to scolding by self-appointed guardians of “civility.” The New York Times headline reporting on her statement neatly summed up the response of many Democrats: “Rashida Tlaib’s Expletive-Laden Cry to Impeach Trump Upends Democratic Talking Points.” Tlaib was called to task for her “profanity” and for her boldness in calling for impeachment before the Mueller report has been concluded or Congressional investigations had been undertaken.

Tlaib is a brave woman who speaks out for what she believes in. As a Palestinian-American, she has loudly supported Palestinian rights and publicly supported a one-state solution to the Israeli-Palestinian crisis. She is also a very bright woman, and her comment about impeachment was no off-the cuff remark; on January 3 she co-authored an op-ed piece in the Detroit Free Press that carefully explains why “now is the time to start impeachment proceedings against Donald Trump.”

I have publicly expressed my great admiration for Ocasio-Cortez and the way she ran as a “democratic socialist,” focusing her campaign largely on economic and social justice issues and not on “Trumpism.” My admiration is undiminished. And I think both her “Green New Deal,” and the tax idea she recently floated in support of it, deserve support. At the same time, I think it is really important, now, to also pay attention to what Tlaib is saying, for she is saying something slightly different than Ocasio-Cortez, something that some on the left seem unwilling to take seriously, and seem to enjoy parodying as an example of a supine liberalism — which is it not.

Here is Corey Robin, for example, celebrating Ocasio-Cortez on Facebook: “And just like that, everyone’s talking about raising the top tax rate to 70%. That’s called shaping the conversation. That’s called seizing the agenda. That’s called leadership. Do people realize just how much the horizon of possibility has been expanded by a single victory in a Democratic primary in June? We’ve got a very long way to go, this is just the opening shot, and the forces arrayed against AOC and her politics are mighty, but more of this, please. Or we could go back to talking about, oh, I don’t know, norm erosion.”

I think that Robin exaggerates the impact of Ocasio-Cortez’s pronouncements in shaping public conversation much less in advancing a policy agenda. But I fully support his “more of this please.” What I do not support is what follows next, the comment about “norm erosion,” a rhetorical back-of-the-hand that Robin seems to delight in delivering these days. His point is clear to all who follow him: we need more emphatically left and indeed democratic socialist talk about political economy, and less “liberal” talk about the ways that Trumpism threatens liberal democracy.

I strongly disagree with Robin here. The discourse of “norm erosion,” and on “how democracies die,” whatever its limits — and few discourses are without limits! — focuses on very real and absolutely dangerous features of Trumpism as an administration and as a movement that has captured the Republican Party.

And I can do no better than to quote from Tlaib, a rightly-celebrated human rights activist, DSA member and newly-installed Congresswoman who no doubt supports Ocasio-Cortez’s “Green New Deal”: “President Donald Trump is a direct and serious threat to our country. On an almost daily basis, he attacks our Constitution, our democracy, the rule of law and the people who are in this country. His conduct has created a constitutional crisis that we must confront now … Each passing day brings new damage to the countless people hurt by this lawless president’s actions. We cannot undo the trauma that he is causing to our people, and this nation. Those most vulnerable to his administration’s cruelty are counting on us to act — act to remove the president and put this country on a path to true justice… this is not just about Donald Trump. This is about all of us. What should we be as a nation? Who should we be as a people? In the face of this constitutional crisis, we must rise. We must rise to defend our Constitution, to defend our democracy, and to defend that bedrock principle that no one is above the law, not even the President of the United States.”

Tlaib clearly thinks that it is possible to act politically against the “norm erosion” and outright norm defiance enacted daily by Trump, while at the same time supporting a range of other important progressive priorities related to social and economic justice. It would indeed seem that she believes it is necessary to do this precisely out of a commitment to “those most vulnerable” to the “cruelty” of the Trump administration.

It is interesting that one of the first and strongest public statements by a newly-elected Democrat supporting Congressional action against Trumpism comes from this DSA member and self-avowed democratic socialist. But it is not surprising. For, as John Nichols explained last August in the Nation, “Rashida Tlaib is Running for Congress on a Mission to Expand Civil Rights Protections.”

Defending liberal democracy from Trumpism is not a distraction from what is really important. It is itself really important, as an end and as a means of further advancing a progressive agenda. The recent statements of both Ocasio-Cortez and Tlaib are important. It is to be hoped that in the coming two years opinion leaders on the left can support both statements, because both are valid, and because it is hard to see how driving a wedge between them does anything to strengthen the liberal left at a time when it needs all the strength it can muster.

Jeffrey C. Isaac is James H. Rudy Professor of Political Science at Indiana University, Bloomington. A Senior Editor at, and regular contributor to, Public Seminar. His new book, #AgainstTrump: Notes from Year One , is published by Public Seminar Books/OR Books. You can purchase it here. Follow Jeff on Facebook.


Don't let the corporate media convince you that all Democrats are moderates.

Posted by Duane Campbell at 7:59 PM