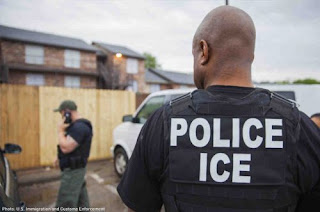 Vanguard AdministratorAugust 23, 2018
By Crescenzo Vellucci
Vanguard Sacramento Bureau
SACRAMENTO – In an exclusive tip to the Davis Vanguard, lawyers report that ICE (Immigration and Customs Enforcement) agents boldly grabbed a man inside a Sacramento Superior Courtroom Wednesday, where he was for other matters.
Lawyers said they were surprised by the action in Dept. 8 and that it was the first time they had seen ICE active in Superior Court here in Sacramento.
The ICE agents, who were sitting in the audience portion of the courtroom, waited until the defendant had been arraigned on another matter before jumping up, announcing who they were and seizing the defendant.
Unconfirmed reports suggested that there was a delay of some sort in the courtroom before ICE was allowed to take the defendant away.
While local immigration rights activists said late Wednesday they also were not aware of something like this happening in a Sacramento courtroom, they aren’t surprised.
“Although this is the first time we have heard of ICE being in the local court, it doesn’t come as a surprise. Our allies in Fresno have been alerting us to the daily presence of ICE in their courts. It’s troubling that ICE simply does not respect the legal process and is willing to jeopardize ongoing legal proceedings in their quest to steal away our neighbors and relatives,” said Ruth Ibarra, NorCal Resist organizer.
In fact, California Chief Justice Tani Cantil-Sakauye a year ago told the federal government to stay out of state courts.

“I am deeply concerned about reports from some of our trial courts that immigration agents appear to be stalking undocumented immigrants in our courthouses to make arrests. Our courthouses serve as a vital forum for ensuring access to justice and protecting public safety. Courthouses should not be used as bait in the necessary enforcement of our country’s immigration laws,” she said.
The Chief Justice explained, “Our courts are the main point of contact for millions of the most vulnerable Californians in times of anxiety, stress, and crises in their lives. Crime victims, victims of sexual abuse and domestic violence, witnesses to crimes who are aiding law enforcement, limited-English speakers, unrepresented litigants, and children and families all come to our courts seeking justice and due process of law.
“As finders of fact, trial courts strive to mitigate fear to ensure fairness and protect legal rights. Our work is critical for ensuring public safety and the efficient administration of justice. I am concerned about the impact on public trust and confidence in our state court system if the public feels that our state institutions are being used to facilitate other goals and objectives, no matter how expedient they may be,” she added.
“Each layer of government – federal, state, and local – provides a portion of the fabric of our society that preserves law and order and protects the rights and freedoms of the people. The separation of powers and checks and balances at the various levels and branches of government ensure the harmonious existence of the rule of law.
“(E)nforcement policies that include stalking courthouses and arresting undocumented immigrants, the vast majority of whom pose no risk to public safety, are neither safe nor fair. They not only compromise our core value of fairness, but they undermine the judiciary’s ability to provide equal access to justice. I respectfully request that you refrain from this sort of enforcement in California’s courthouses,” she said.
NorCal Resist echoed the Chief Justice’s comments.
“We encourage anyone who needs to make a visit to a government office, or to a court or ICE check in to reach out to us so that we can provide someone to accompany you. We may not be able to stop ICE, but we think having allies present discourages blatant abuses like what happened in the court today. Should ICE take an action, if we are present at the least we can move our legal and activist networks into action, immediately,” said Ibarra.
Alex Gonzalez, also with NorCal Resist, said: “We also strongly encourage families, and groups in the community, to contact us to host a family preparedness plan training. We know that no one wants to think about their loved ones being kidnapped by ICE, but by planning for the worst we can act quickly should that occur.
“That means being able to make sure kids get picked up and taken to a relative or trusted family member, that your loved ones have your A-number, so we can locate you in the detention system, and we can get legal resources connected as soon as possible. While we fight for the abolition of ICE we also have to act to defend our communities and to keep families safe. This is one way we can do that.”
http://www.davisvanguard.org/2018/08/ice-agents-surprise-lawyers-sacramento-court-grab-man-inside-courtroom/
Get Tickets To Vanguard’s Immigration Rights Event
Posted by Duane Campbell at 12:20 PM