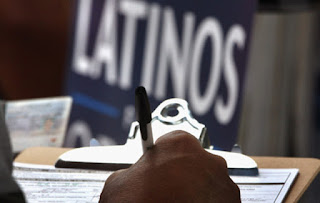 (Los Angeles, CA Feb 22) Kicked-off by the Nevada Caucuses the Presidential Candidates are now in the "Latino Primary Gauntlet" of 11 states that have at least 100,000 Latino registered voters or a total of more than 6,000,000 Latino voters.

"Nevada gave us the first surprises of the season with Latinos comprising a record 19% of the Democratic caucus goers and matching their 2008 turnout with about 15,000 votes cast on Feb 20. This is impressive given that the Black vote declined by 50% and all Democratic turnout declined by 33%," said Southwest Voter Registration Education Project President Antonio Gonzalez.

"While in "the Latino Gauntlet" the Candidates will have to address Latino-specific concerns like: immigration reform; Puerto Rico's debt crisis; Obama's Cuba Plan; border
colonia development; civil and voting rights; the war on drugs; and more. All these issues are in addition to mainstream concerns that are very much part of the Latino agenda like jobs, home ownership, campaign finance reform, college affordability, small business development, quality public education, climate change and so on," Gonzalez continued.

"SVREP is hosting Latino Vote Summits in Nevada, Texas, Florida and Arizona to give Presidential Candidates a chance to engage Latino voters while they are in the "Latino Gauntlet" -the next one being in San Antonio, TX on this Friday, Feb 26 at UTSA. People can get all the details on www.svrep.org," said SVREP Vice President Lydia Camarillo.

"Latinos do vote in the primaries of both the Democratic and Republican Party. However they comprise a much bigger share typically in the Democratic Primary. For example the Latino vote will represent 35% of the Democrats in Texas, 20% and above in Colorado, Florida, and Arizona, and 5-10% in the other Latino-oriented states," added Camarillo.

SVREP is a nonpartisan, nonprofit organization founded in 1974 with offices in San Antonio and Los Angeles. SVREP's Latino Vote 2016 campaign will register 250,000 voters in 2016.
Posted by Duane Campbell at 7:13 PM