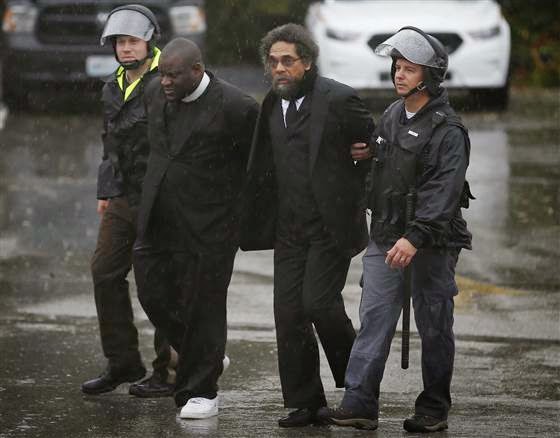 On October 14, Cornel West spoke to a capacity crowd at the 5th and K Street Busboys and Poets bringing a message of hope and determination in the struggle for justice, a struggle that has grown sharper in recent years.  The occasion was publication of West’s new book, Black Prophetic Fire – an exploration of the contemporary relevance of the legacies left by Frederick Douglass, Ida B. Wells, W.E.B. DuBois, Ella Baker, Martin Luther King Jr., and Malcolm X.   A set of dialogues with Christa Buschendorf (a German scholar at the University of Frankfurt/Main specializing in African-American studies), the work emphasizes how these figures championed a different, alternative conception of US democracy by uniting demands for racial and economic justice.
Rejecting the caricatures and simplifications by which history remembers them, West reminds us of the prophetic tradition – the “Black Fire” referred to in the title – within the African American community, a tradition which strove for liberation from the shackles of racism by positing a vision of human liberation.   Each leader he discusses, in his or her own unique way, connected the dots that link the pervasive social and personal alienation inherent in a system of racial privilege to the exploitation and violence that pervades everyday life.   Thus, as they spoke out and organized against the horrors of slavery, lynching, and segregation, they sought not acceptance into an oppressive system, but rather social transformation that would make society worthy of inclusion.   Whether we look at the largely forgotten Ida B. Wells, whose pioneering role documenting the scourge of lynching served as a precursor to Progressive Era muckraking, or recall DuBois, whose towering intellectual importance has been placed in a corner by anti-Communism, dominant historical narratives leave out the substance of the struggles for equality that have been at the core of political struggles throughout our history.


So too, as West emphasizes, the false narrative that sets Malcolm X and King in opposition to each other becomes a means to avoid the similarity of their critiques of the underlying structural failings of US society, becomes a mechanism to reduce social struggles to the personality of charismatic leaders.  Lost in such retellings of the past is the extraordinary role of “ordinary” working people whose courage and vision is what made the civil rights movement possible.  Ella Baker embraced and embodied that recognition, her leadership role in the civil rights movement of the 1950s and 60s undervalued by society’s sexism and misunderstood by those unable to see that genuine leadership means organizing people to seize the moment themselves.  Her emphasis was always and ever on grassroots activism, on making real a vision of participatory democracy – a legacy of particular importance today when people have been made to feel disempowered.
And in a juxtaposition of that legacy and today’s reality lies West’s critique – an uncompromising critique — of the Obama Administration and of those liberals and progressives, especially political and intellectual leaders in the  black community, who justify the President’s actions.  The presentation laid particular stress on the betrayal of the historic anti-war role of black leadership by Obama’s reliance on war – his use of drones, of assassinations, of bombings – as a legitimate tool of foreign policy.  This is in contrast to DuBois who – when over 80 years old — was handcuffed and arrested because of his refusal to back down from peace activism, and it is in contrast to King – who broke with Lyndon Johnson, with the AFL-CIO, with “respectable” civil rights leaders — by denouncing the war in Vietnam, by denouncing US violence abroad in all its forms.  West reminded us of the need to remember King for the radical he became, rejecting the “santaclausifed” version of his convictions by media and politicians alike.  King did not only condemn the war, he challenged too the belief that the US has nothing to learn from the rest of the world — the chauvinistic pretension that has rationalized the imperial foreign policy of Clinton and Obama alike.
Arrogance over the supposed moral virtues of the US vis-à-vis the rest of the world of necessity must gloss over the cruelties and hypocrisies of our criminal justice system, a connection West makes again and again.  Eric Holder’s unwillingness to indict Bush Administration torturers presaged the Justice Department’s subsequent refusal to prosecute the corporate criminals responsible for the 2008 financial collapse.  That collapse had a particularly devastating impact on the black community; the class bias in prosecutorial policy as in economic policy has strengthened inequality between rich and working people, and intensified the gap between black and white.  West used this analysis to reinforce his point that a direct confrontation with racism is essential to overcome all forms of social and economic injustice, that failure to do the one leads to failure to do the other.  He made that point too by noting that the other side of the Obama Administration’s unwillingness to prosecute law-breaking bankers has been its unwillingness to end the “war on drugs,” with its victimization of people of color, its unwillingness to end the discriminatory and inhumane practice of deportation of immigrants.
The picture painted might have been bleak. West acknowledged that he wrote Black Prophetic Fire out of concern that the tradition of black radicalism was being undermined by support for Obama’s politics of accommodation. His presentation, however, was given in another spirit altogether, fueled by the hopefulness of renewal in the mass protests in Ferguson.  Just returned from there, where he had been arrested in a civil disobedience protest, West saw in the town’s black youth – and in the support they have received from across the country — a revival of mass movements rooted in and growing out of the experience of the marginalized and dispossessed, breathing new winds to fan the flames of discontent, bringing forth a new vision of what society could be.
West’s talk struck a chord in that capacity crowd – a crowd that he challenged by urging them to reject the easy path of acceptance and instead give content to their individual lives by seeking the harder path of challenge and commitment.  He called on all to act and thereby contribute to ending the cycle of war, racism and exploitation that has defined too much of our nation’s history.  Absent, however, was a sense of how to bring such change into being.  That, of course, was not the purpose of West’s talk or his book; he sees his role in presenting a public challenge by speaking truths that too many in positions of influence refuse to acknowledge.   Nonetheless, the challenge of how to turn words into deeds is one that has to be accepted.  Each of the persons discussed in Black Prophetic Fire strove always to maintain a balance between radicalism and engagement.
The need to condemn liberal accommodation with power while also focusing fire on right-wing forces that seek to dismantle liberal values is a challenge that faced the abolitionist movement, the democratic advance of the Reconstruction years, the highly contradictory Progressivism of the turn of the century before last, and the dynamics of both the New Deal and Civil Rights struggles.  This is the challenge facing DSA – West serving as one of our Honorary Chairs – as it is the challenge facing the left as a whole in all its forms.  The legacy of engagement that doesn’t surrender a genuine radicalism, the legacy of a radicalism based on the hopes, dreams and actions of working people, of a radicalism that builds unity by directly challenging racism and all forms of oppression is the legacy of Douglass, Wells, DuBois, Baker, King and Malcolm that West brought to light.  It is a legacy to use in building the movement for peace, justice, equality and freedom, in the building of a socialist movement today.
Be Sociable, Share!

Posted by Duane Campbell at 2:27 PM