Similar to the murder of the Jesuits in El Salvador. 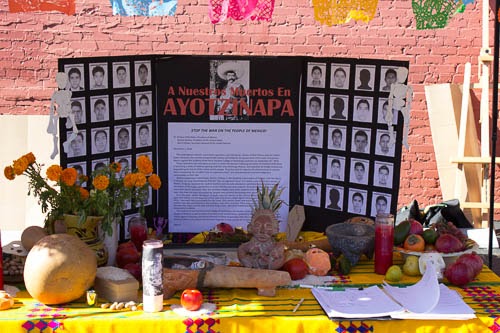 
The disappearance, and presumed murder, of 43 college students six weeks ago has brought parts of Mexico to a tense point. On Monday, thousands of protesters blocked access to the airport in Acapulco, and last week tens of thousands more filled the streets of Mexico City.


They are understandably outraged at a government that has failed to provide security, respect the rule of law, hold criminals accountable and ensure justice for victims and their families. In short, when gang members, security forces and others kill, they know there is a good chance they can get away with it.


The 43 students from a rural teachers college disappeared on Sept. 26 in Iguala, 120 miles south of Mexico City. They had traveled there to collect money and steal buses for transportation to a demonstration. According to authorities, the town’s mayor feared the students would disrupt a speech by his wife, so he told the police to stop them. The police ambushed them, engaged in a shootout that left six people dead, and then turned the students over to members of a drug gang who killed them, burned their bodies and erased much of the evidence.

Although the attorney general, Jesús Murillo Karam, announced on Friday that authorities had arrested at least 72 people, including the mayor and his wife, questions remain, including whether some students may still be alive. The government has said it will send some incinerated remains to a lab in Austria for identification. There may have been more to work with if the federal authorities had not delayed in taking over the investigation.


Tragically, this is merely the latest example of a breakdown of law and order. In June, military personnel in Tlatlaya killed 22 people inside an empty warehouse; later, according to the National Human Rights Commission of Mexico, state prosecutors detained two of three surviving witnesses, beating and threatening them into saying the military was not responsible for the killings.


The two incidents are “the worst atrocities we’ve seen in Mexico in years,” said José Miguel Vivanco, the Americas director at Human Rights Watch. But they are part of a pattern. Some 22,000 people have gone missing since a wave of drug violence began in 2006, and 100,000 people have died since 2007 in violence linked to organized crime. A 2013 investigation by Human Rights Watch found that in 149 of 250 disappearance cases, there was “compelling evidence” that state agents were involved.

Two years ago, when he took office, President Enrique Peña Nieto pledged to revise the penal code, give more attention to crime victims and focus on Mexico’s economic growth as a means of reducing drug-related violence. What limited progress has been made still has not repaired a criminal justice system unable to properly investigate crimes, end the corruption or stop the killings.
Posted by Duane Campbell at 7:56 PM