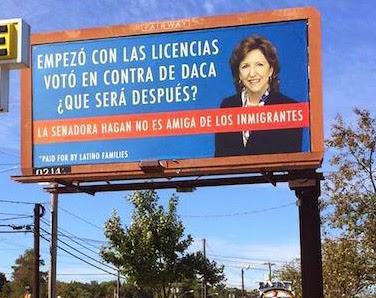 A coalition of Latino families is going after Democratic Sen. Kay Hagan of North Carolina in a pair of Spanish-language billboards that are meant to expose her record on immigration.
The billboards went up Tuesday — one in Raleigh and another in Durham — and were paid for by donations from Latino families. They show an image of Hagan and assert that the Democratic senator “is not a friend of immigrants.” Hagan is among the handful of vulnerable Democratic senators running for re-election in tough races.

Viridiana Martinez, a Dreamer who helped with the efforts to put up the billboards, said the purpose of the billboards is to hold Hagan accountable on immigration.
“This isn’t about a political party,” Martinez said in an interview with VOXXI. “This is about accountability, and Sen. Hagan needs to know that there are consequences for being anti-immigrant.”
The billboards allude to a vote Hagan took in 2006 when she was a state senator to prohibit undocumented immigrants from being able to get driver’s license in North Carolina.


They also refer to Hagan’s vote in September supporting a bill by Republican Sens. Jeff Sessions of Alabama and Ted Cruz of Texas. The bill sought to block more undocumented young immigrants from applying for the Deferred Action for Childhood Arrivals (DACA) program and to prevent President Barack Obama from taking executive action on immigration. Hagan was one of the five Democratic senators who voted in favor of the bill.


Reposted from VOXXI
Posted by Duane Campbell at 8:18 PM