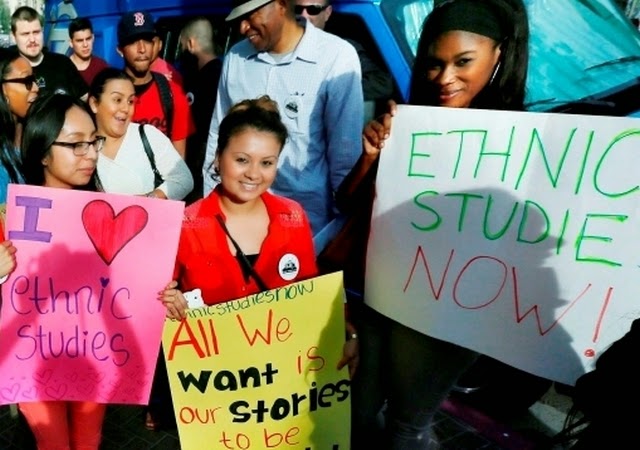 PURPOSE: A conference for those committed to promote Ethnic Studies at all levels of the educational system, to discuss the state of Ethnic Studies in California, Arizona and Texas, and present new models that enhance Ethnic Studies in K-12, based on local-control school board policies and partnerships between schools with colleges and universities.
KEYNOTE ADDRESSES: by Dr. Maulana Karenga, Professor & Chair, Africana Studies Dep't, CSULB and Dr. Rudy Acuña, Professor Emeritus, Chicana/o Studies Dept., CSUN.

This Saturday there will be a conference at California State University Long Beach. There is a movement to make Chicana/o studies mandatory in California Public Schools. The leadership is a combination of old timers and grassroots activists who are not part of the selfie generation.

Organizers and supporters point out that the dropout problem is still at an epidemic stage in barrio schools and because of tuition and recruitment priorities the poor are being squeezed out. They also want to reverse the trend toward groupie politics by educating students through a process of identity, skill development and critical thinking.

The movement for CHS in the public schools has been picking up steam as of late.  Led by people such as Elías Serna, Johny Ramírez, Selina Rodríguez and others from the Westside, the Santa Monica/ Malibu Unified School District recently created a small Ethnic Studies course/program. In East LA, the Semillas is an alternative K-12 school founded by the leaders of the UCLA Hunger Strike.

In the Pico-Rivera El Rancho School District Jose Lara (José del Barrio) has led the drive to make Mexican American Studies mandatory. And just recently California Latino legislators introduced a bill to make CHS mandatory in the public schools. Sadly they did not fight for it and withdrew the bill.

Attendance at the Long Beach conference could be historic. History tells us that our advances in the 70s and access to higher education were a product of the Chicana/o Movement and the drive for CHS. Perhaps these programs would reverse the trend toward the politics of the selfies and give us a sense of place and pride.  So try to go but leave your   cellphones at home.
Posted by Duane Campbell at 12:54 PM