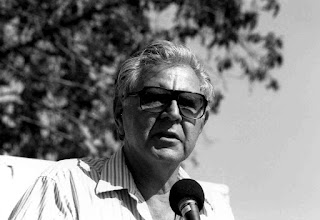 One of the advantages of growing old is that, if you look back in time, you see patterns in behavior and events. You can anticipate that the boulder that Sisyphus is pushing up the hill will roll back.

This morning I clicked on to the Los Angeles Times and read that Gov. Jerry Brown -- who signed the Agricultural Labor Relations Act in 1975 -- vetoed the Farm Worker Safety Act, legislation.

Many supporters were disillusioned. It was the 50th year anniversary of the United Farm Workers’ struggle to get farmworkers the same protections that many animals enjoy. Moreover, Jerry Brown was a favorite among Latino voters.  I remember two years ago a left-leaning Mexican American attorney saying that his priority was to get Brown elected and he would not contribute to anyother cause.

In the context of history, Brown’s flip flopping is no surprise. I remember in 1978 his opposition to Proposition 13 which contributed to destruction of California’s education system, only to join the sponsors once the initiative passed. Brown offered no moral leadership.  Brown also recently vetoed the Trust Act that would have limited the state's law enforcement's interactions with federal immigration enforcement efforts.  It would have been a bold answer to Arizona’s nullification of federal powers.

The adage to never trust a gringo or a liberal who comes speaking Spanish rings true.  Brown knows that the United Farm Workers do not have the same cache among liberals that they did in the 1960s and 70s so he relies on Mexicans and Latinos having a short memory and on liberals not caring enough about farmworkers and immigrants.  How many voters are there who care?

Some will rationalize, well Brown signed the state Dream Act and he is pushing Proposition 30 that will raise sales and income taxes and save California’s public schools and colleges. They are really important. They don’t say Latinos are not important but the inference is that they are not as important.

In the past fifty years we have seen almost every reform passed in the sixties roll back on us. The 1954 Brown v. Board of Education is unenforced, the Civil Rights and Voters Rights Acts have been dismantled, bilingual education, affirmative act and the 14th Amendment have all joined the fishes. Conservative Ann Coulter has publicly said what many Republicans say behind closed doors -- that civil rights is a black issue and does not apply to other groups or women.

All of this is not new. The history of the 14th Amendment is constantly in the courts. Passed originally to secure equal rights for blacks it has over the years been widened to include all residents of this country regardless of color or gender. However, depending on the power of the Robber Barons it has also been abused to push a laissez-faire elite agenda.

During the Gilded Age the Supreme Court interpreted laws not based on the intent of Congress but on what was good for corporations.  To protect corporations from the states it made them corporations. This encouraged rampant corruption and the Court in the 20th Century moderated this until the ruling of Citizens United (2010) where corporations have once more become persons.

If it were just a case of “Them and Us” it would be easier to deal with the protection of the rights of Mexican Americans and Latinos.  Who is on whose side would be clear. But this is like when you were a youth and you got into a fight and most of your supposed friends stood by while you got jumped. “Poor Rudy, I don’t want to see him beat up but there are other fights.”

Ideologically, I am clearly a radical. I share the concerns of the progressive community on human rights. However, I have always been put off by the liberals “Anything But Mexican” approach to issue.

Historically, this not new, it dates back to the Mexican American War. Not much was said about the Texas Rangers who were latter day storm troopers.  A multitude of historically incorrect movies and TV series were produced -- making them the good guys. Even a baseball team is named after the Rangers; I wonder what the reaction would be if Mexican Americans called a team the “Hitler All-Stars.”

The progressive left media is in part to blame for this, it is complicit by its silence.  Just look at the editorial boards, the columnists and number of articles on Latino issues.  Univision is more interested in showing cleavages than in exploring the issues. The Huffington Post features articles on actors you didn’t know are part Latino or Latina – like anyone gives a damn or it makes any difference.

An interesting study would be the rationalizations used by the progressive left to justify not jumping in to help Latinas/os while they are being mugged. In my study of Arizona miners I kept reading from progressive unions such as the Western Federation of Miners that all Mexicans were scabs, siding with the American Federation of Labor’s racist policies that limited immigration. It did not occur to them that perhaps racism played a role in their crossing picket lines.  Mexicans were not only segregated and the WFM condoned a double wage system. Once allowed equality Mexicans were the most militant sector of labor.

Since the 1960s a common excuse among armchair radicals has been that Mexican Americans are cultural nationalists thus playing into the ultraconservative argument of reverse discrimination.  Armchair radicals want to define what id good and bad nationalism. At the same time, they  applaud the Vietcong and the Cuban Revolutions.

This wrongheaded reasoning is played out Arizona where I have heard white progressives say that they are for civil rights but that the defense of Mexican American Studies is regressive because it is cultural nationalist.  In the sixties and seventies this same wrongheaded logic was used to dismantle many of the more political Black Studies programs that were labeled Afrocentric.

How different is this wrongheaded logic to calling Mexicans scabs because they do not agree with the racist policies of the white leadership?

If progressives do not want to join the fight and protect the rights of Mexican Americans and Latinos let them at least be honest. They either don’t care about them or they are afraid. This is the case in Arizona where the silence is deafening.

I have white friends who say well I am supporting the Dream Act like President Obama, I am doing my part. The truth be told, supporting the dreamers is a no brainer. These students are the best students in the community, students who are not necessarily active in community or campus affairs. Unlike many of us, they are not critical of the United States and want to become part of it.  Hopefully, once they study history, their interests will become more political.

I am interested in human and labor rights for all and I should be willing to jump into the fray to help every group. I work hard on Chicana/o issues but this support automatically extends to Central America and opposition to American Imperialism throughout the world. When I was asked whether an organization I am involved in would be willing to write an amicus brief in support of Mumia I said yes because capital punishment affects us all – it is wrong.

I don’t believe that it is too much to ask that people I have gone to jail with to support Mexican American Studies and their making statements about things that they don’t know anything about insults me.

The fight for equal education, the fight to desegregate our schools, the fight against the horrendous dropout of Mexican Americans, the right to study one’s heritage, the censorship of books, the firing of whistle blowers, fraud in the appointment of school board members, the brutalizing and intimidation of a community, the Democratic Party selling out, labor leaders selling out, and the nullification of the Constitution for starters should concern all of us.

Jerry Brown betrayed us and we should be mad as hell. Everyone should jump into this fight, it ain’t fair.

So those who come to us whispering sweet nothings in our ears, telling us how much they love Mexican food and mariachis I say they should have the decency not to ask us for support for their causes.

Depositions begin this week in the case against HB 2281. You can donate by clicking on to http://saveethnicstudies.org/  . We are run entirely by volunteers; however, depositions are expensive. Please donate at least $5 a month.

Depositions have started in the case against Sean Arce and José González. Four hours of depositions were taken of both Arce and Gonzalez. Our side deposed Ward this past week. Please donate: https://www.wepay.com/donations/144408

Posted by Duane Campbell at 8:22 PM