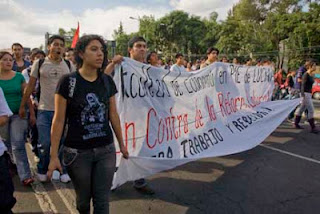 Economics students at the National Autonomous University of Mexico march from the Plaza of Three Cultures to the Zocalo to protest a proposed labor law reform and to mark the anniversary of the October 2, 1968 massacre.

Posted by Duane Campbell at 8:45 PM