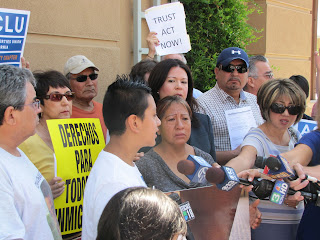 by Duane Campbell
On July 5, 2012, the California Senate passed the California Trust Act to set California policy in opposition to Arizona’s anti immigrant SB 1070.  On the same day,  Sacramento police arrested Juana Reyes outside of a South Sacramento  Wall Mart for selling tamales .  She was arrested upon a request from Wall Mart, charged, and later  all charges were dropped.  In the meantime, Immigration and Customs Enforcement (ICE) was informed and she was “held” by Sacramento County Sheriffs.  The arresting officers told her children they would never see their mother again.  She spent the next two weeks in jail- her U.S. citizen  children ages 7 and 10  were placed  in children’s protective service.
Such arrest, detention, and orders for deportation was totally unnecessary under the conditions of the California Trust Act (AB1081) which has yet to be signed by Governor Brown.
Today, some 35 demonstrators, including members of DSA, the ACLU, Occupy Sacramento and others  joined Juana Reyes in a demonstration to insist that her deportation by stopped and that her family be protected.  Assemblymember Tom Ammiano , author of the Trust Act, commented, “ Had the Trust Act ( AB 1081) been in place Juana Reyes  wouldn’t need a lawyer, wouldn’t need a press conference, and would not be facing deportation. Instead, she would still be working hard to provide for her two small children – as hse has for her two decades in the U.S.- she would still be trying to live a law abiding life.”
Attorney Julia Vera, working with the Northern California ACLU, said that Juana Reyes was released on a $1,500 bond, an amount she could not raise by selling tamales.  Members of her local church raised the funds for her bond.


Under the existing Secure Communities Act more than 10,000 have been arrested in California.   While the policies were amended two weeks ago by the Obama Administration it is clear that many ICE agents continue to defy the policy change and arrest people such as Juana Reyes.

Posted by Duane Campbell at 2:39 PM