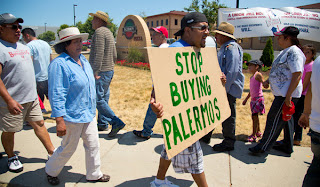 By STEVEN GREENHOUSE and STEVEN YACCINO
MILWAUKEE — On May 27, about 150 workers from Palermo’s Pizza factory here, representing three-fourths of its production workers, met to sign a petition saying they wanted to unionize. They say they gave the petition to management two days later.
Around the same time, Palermo’s delivered letters to 89 immigrant workers, asking them to provide documentation verifying that they had the right to work in the United States. Ten days later, almost all of them were fired.
Labor organizers assert that Palermo’s, one of the nation’s largest producers of frozen pizza, was trying to snuff out a unionization drive in its infancy. The company says it was merely responding to warnings it had received from federal immigration authorities to fire unauthorized workers or face hefty fines.
Scores of Palermo’s workers have been on strike since June 1 to protest this immigration crackdown, as well as what they say were poor wages and working conditions. Day after day, the strikers picket outside the factory, often in 90-degree heat, chanting, “No justice, no pizza.” Labor unions across the nation have rallied behind them and called for a boycott of Palermo’s products.


At a time when labor leaders see immigrants as a group ripe for unionization, the conflict highlights how difficult it can be to organize workplaces that include unauthorized workers, who are entitled to certain labor protections despite working illegally.
Read the entire piece here. http://www.nytimes.com/2012/07/28/business/striking-palermos-pizza-workers-say-immigrants-were-fired-to-stop-a-union.html?_r=1
Posted by Duane Campbell at 12:59 PM