New President in Brazil and continuation of the social democratic policies 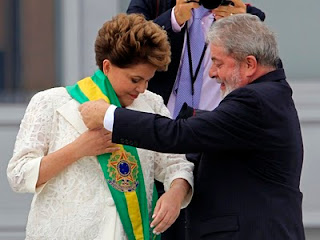 
When the confetti was still falling after her victory at
the polls on October 31, Dilma Rousseff, Brazil's first
female president-elect, said, "I want to state my first
commitment after the elections: to honor Brazil's women
so that today's unprecedented result becomes a normal
event and may be repeated and enlarged in companies,
civil institutions and representative entities of our
entire society."

In a country where women have typically played a limited
role in politics, the election of a woman to Brazil's
highest office signals a major break from the past. But
Rousseff's term will likely be marked by continuity with
her predecessor, Luiz Inácio Lula da Silva. Lula, a
member of the Workers' Party (PT), is leaving office
with 87 percent support in the polls. An economist, PT
bureaucrat, chief of staff under Lula and former
guerrilla in the anti-dictatorship movements of the
1960s and '70s, Rousseff was handpicked by Lula to
follow his lead as president. When she is sworn in on
January 1, she will inherit Lula's popular legacy and
will be further empowered by the fact that her party and
allied parties won a majority of seats in the Senate and
Congress. Not even Lula counted on this much support.

Considering the major economic and social gains
Brazilians have enjoyed since Lula took office in 2003,
the popularity of the PT candidate in the recent
election was not a surprise. During Lula's two terms as
president, 20 million Brazilians rose out of poverty,
and the minimum wage was raised by more than half. These
advances were enabled by the country's economic growth,
spurred on in part by major exports to China; but they
were also a result of Lula's political will to promote
social programs. In her victory speech, Rousseff pledged
to extend these popular programs-at one point she vowed
to eradicate poverty entirely. "We must not rest while
there are Brazilians going hungry," she said.


Among the initiatives likely to expand is the Zero
Hunger program, developed by Lula, which provides direct
vitamin and food subsidies alongside projects to
generate employment through infrastructure projects in
electricity and irrigation. The Family Grant program is
another success story: the program, which gives stipends
to poor families that earn less than 120 Brazilian reais
per month (about $71 US) has touched the lives of some
12.4 million families. In order to receive funding,
families are required to send their children to school,
where they have to attend at least 85 percent of
classes, go through healthcare exams and receive
vaccinations. More recently, Rousseff helped develop the
My House, My Life program, which provides subsidies for
home ownership.

Rousseff's early cabinet appointments suggest that
continuity will be the name of the game on issues of
health and social development. She tapped Lula aide
Tereza Campello to manage the Family Grant program as
minister of social development, and Alexandre Padilha, a
Lula adviser, will take over as health minister. The
size and impact of these initiatives will likely
increase in the coming years with help from new state
oil revenues. Rousseff was the chairwoman of the state-
run oil company, Petrobras, and she helped draft
legislation that will give the state a key role in the
exploration and extraction of oil reserves recently
discovered off the coast of the country. Some of the
funds generated for the government from this resource
will be directed specifically to healthcare and
education programs.

While expanding positive social programs, Rousseff is
also expected to continue Lula's less progressive
politics in the area of land reform and agriculture. His
powerful support for agribusiness, particularly soy and
corn, over small farms and landless farmers has been one
of his biggest failures as president. Thanks to Lula's
encouragement, multinational agro-industrial
corporations-including Monsanto, Archer Daniels Midland,
Cargill and Syngenta-have expanded their operations
throughout the country, increasing their ties with large
landowners and Brazilian politicians. As political
scientist Miguel Carter notes, "From 2003 to 2007, state
support for the rural elite was seven times larger than
that offered to the nation's family farmers, even though
the latter represent 87 percent of Brazil's rural labor
force and produce the bulk of food consumed by its
inhabitants." The result of this imbalance is an endless
sea of soy plantations, massive cattle ranches and
poisonous industrial farms that displace poor Brazilian
families and cut down ever larger swaths of rainforest
while enriching a handful of global elites.

Although this trend has empowered certain aspects of the
Brazilian economy, it has destroyed the countryside and
displaced farmers at an unprecedented rate. In the face
of Lula's policies, Brazil's Landless Workers' Movement
(MST) continued occupying unused land and settling it.
Over the past twenty-five years, the MST has
expropriated 35 million acres of land, settling some
370,000 landless families.

The MST supported Rousseff during her campaign, taking
into account that the right-wing candidate José Serra
would have been catastrophic for the movement and its
allies. This is consistent with the movement's continued
backing of Lula during elections, despite the
president's slow progress with land reform; the analysis
of the MST leadership is that a relative ally in the
government is better than an outright enemy. MST leader
Joao Pedro Stedile explained this position to a Reuters
reporter: "A worker in the face of a reactionary boss
does not mobilize," he said. "With Dilma, our social
base realizes that it is worthwhile to mobilize, that we
can move forward, doing more [land] occupations and
[labor] strikes." Hopefully, the MST will find an ally
in the Rousseff presidency. In any event, the movement
will likely continue with its direct-action tactics to
build a better world for its members regardless of who
resides in the presidential palace.

Rousseff is also expected to build on the epic gains
Lula made in establishing Brazil as a regional power and
helping to lead the region toward independence from the
United States. He helped strengthen regional economic
and diplomatic blocs such as Mercosur and the Union of
South American Nations, championed resistance against
President George W. Bush's push for a Free Trade Area of
the Americas, denounced the coup against Honduran
President José Manuel Zelaya, and supported Presidents
Evo Morales of Bolivia and Rafael Correa of Ecuador
during right-wing destabilization efforts in those
countries. Rousseff has appointed Antonio Patriota, a
close colleague of former minister Celso Amorim, as the
minister of foreign relations; Patriota is likely to
follow in his predecessor's footsteps.

On the international front, Rousseff's administration
will bring increased clout to negotiations over climate
and global trade. In late January, just weeks after
Rousseff takes office, Brazil will attend the annual
World Economic Forum in Davos, Switzerland. The global
spotlight will be on Brazil when Rio de Janeiro hosts
the 2014 World Cup as well. Already, preparations for
the event have served as an excuse for increased police
repression and displacement in the city's favelas.

As the world looks to Rousseff for signals about her
governing style and policy plans, the focus may be on
areas where she distinguishes herself by breaking with
the past-particularly with regard to women's rights. As
Rousseff told reporters after her victory, "Equal
opportunity between men and women is an essential
principle of democracy." Yet the first female president
of the region's largest nation and economy must operate
within the same economic, environmental and political
constraints as her mentor and predecessor. Rousseff is
unlikely to step out from under Lula's shadow for some
time.


At this moment, I want to pay tribute to another great Brazilian, the indefatigable fighter and comrade who has been at President Lula's side for the last eight years: our dear Vice-President José Alencar. What an example of courage and of love for life this great man has given us! And what a partnership we had in President Lula and Vice-President José Alencar, for Brazil and for our people!
Vice-President Michel Temer and I feel the full responsibility of continuing on the road that they have started.
A government builds on the accumulation of achievements that are won over the years. It will always involve change and continuity in its own time. Therefore, while acclaiming the extraordinary progress made recently, led by President Lula, it is also fair to recall that many people, in their own time and in their own way, have made huge contributions to the achievements of today's Brazil.
We are living through one of the best periods of our nation's life: millions of jobs are being created; our growth rate has more than doubled and we have ended a long period of dependence on the International Monetary Fund, at the same time as overcoming our external debt.
Above all, we have cut our historical social debt, rescuing millions of Brazilians from the tragedy of extreme poverty and helping millions of others to join the middle classes.
But in a country as complex as ours, we always have to wish for more, discover more, create innovative new directions and always seek new solutions.
It is only thus that we can guarantee that those who have seen improvements in their lives will be able to accomplish still more; and to prove to those who are still struggling to emerge from destitution that they will indeed change their lives and reach a new level, with the help of the government and of all society.
That we can, in fact, be one of the most developed and least unequal nations in the world - a country with a solid and entrepreneurial middle class; a vibrant and modern democracy, full of social commitment, political liberty and creativity.
Posted by Duane Campbell at 8:44 PM