Texas Governor Seeks to make it Illegal to assist Mirgrants.

ed. This is developing as a center piece of the Republican campaign for 2022 against immigrants, 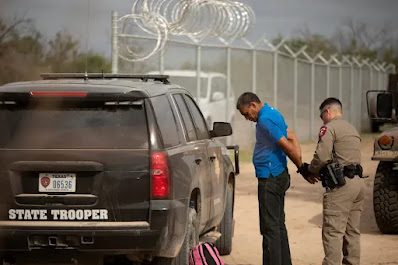 If Abbott does not rescind the order, Garland concluded, “the United States intends to pursue all appropriate legal remedies to ensure that Texas does not interfere with the functions of the federal government.”

Abbott’s order prohibited anyone except federal, state or local law enforcement from providing ground transportation “to a group of migrants who have been detained by CBP for crossing the border illegally or who would have been subject to expulsion under the Title 42 order.”

Title 42, first invoked during the Trump administration, allows the government to immediately expel undocumented migrants, even those seeking asylum, due to the pandemic. The Biden administration has exempted unaccompanied minors from the expulsion authority, but it’s continued to expel adults and families.

Abbott directed state troopers to “stop any vehicle upon reasonable suspicion of a violation of paragraph 1, and to reroute such a vehicle back to its point of origin or a port of entry if a violation is confirmed.” The order authorized state law enforcement to impound vehicles that violated its first two paragraphs.

The governor said he was issuing the order in light of the pandemic, but as local media noted, Abbott has prohibited mask mandates in the state, even in schools, and Texas has vaccinated less of its population than most other states in the nation.

Immigration advocates criticizing the order said it would only heighten chaos at migrant shelters, and that it would encourage racial profiling from law enforcement.

Multiple non-law-enforcement actors, including non-profits, state health authorities and others help undocumented people move around Texas and the nation after they initially cross the border, as they await court dates.

Garland said the order would endanger law enforcement, exacerbate crowding in shelters and interfere with with court dates for undocumented people. He cited several paragraphs of legal precedent.

In short, Garland concluded before issuing his threat of legal action, “the Order is contrary to federal law and cannot be enforced.”

Matt Shuham  (@mattshuham)  is a reporter in TPM’s New York office. Prior to joining TPM, he was associate editor of The National Memo and an editorial intern at Rolling Stone.

Posted by Duane Campbell at 5:33 PM