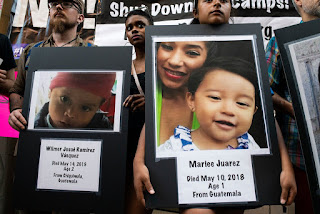 Buzzfeed is reporting that Google hired Miles Taylor to be "head of national security policy." Before Google, he was a top political champion of Trump’s racist Muslim Ban and a key player in the caging of children at the southern border.1
Taylor’s former co-workers are facing massive blowback for their anti-immigrant careers and the shameful attempts to redeem themselves. Google is trying to pretend that everything is fine and going about business as usual, but with your help, we can make sure Miles Taylor’s bigoted résumé doesn’t go unnoticed.
Together, let’s make it as easy as possible for the tech giant to fire Miles Taylor with one massive public outcry:
Sign this petition demanding that Google fire Miles Taylor, a key advocate for Trump's racist Muslim Ban and family separation policy.
Miles Taylor was chief of staff to Homeland Security Secretary Kirstjen Nielsen—the Cabinet official who oversaw the execution of the Muslim Ban, filled concentration camps with children, and separated countless families. More than that, he often acted as a spokesman for Trump’s Muslim Ban, speaking on its behalf to outlets ranging from NPR to The New York Times.2
Back when the Muslim Ban was being put into place, Google appeared to take a clear stand against the racist ban. CEO Sundar Pichai tweeted, “Google is with you” to the people affected by the Muslim Ban,3 and Google co-founder Sergey Brin attended one of the airport protests that erupted that week.4
By giving a cushy lobbying gig to one of the Trump administration’s go-to advocates of the Muslim Ban, Google has made it exceedingly clear that they are not with people affected by the Muslim Ban, or the tens of thousands who have taken action against it.
It’s time to tell Google: Fire Miles Taylor and make it clear you don’t hire people whose job it was to implement policies that brought immense fear and chaos to Muslim and immigrant communities.
Click here to add your name to this petition, and then pass it along to your friends.
Thanks!
—Sijal Nasralla, MPower Change
Sources: