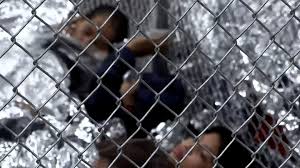 Following a public outcry, hundreds of migrant children have been transferred out of a filthy Border Patrol station in Texas where they were detained for weeks without access to soap, clean clothes or adequate food, the authorities confirmed on Monday.

Some of the children were transferred into a shelter system maintained by the Department of Health and Human Services, while others were sent to a temporary tent facility in El Paso, according to Elizabeth Lopez-Sandoval, a spokeswoman for Congresswoman Veronica Escobar, who began looking into the overcrowded facility in Clint, Tex., last week after reports about the conditions there.

The move came days after a group of lawyers was given access to the station in Clint and said they saw children as young as 8 years old caring for infants, toddlers with no diapers, and children who said they were waking up at night because they were hungry. After they arrived on June 17 and observed the conditions, the lawyers immediately began lobbying for the children to be released.

The Border Patrol had been routing children to Clint because the agency was facing an unusually large influx of border crossers and had insufficient space to house them during the normal 72-hour processing period at the border. The infants there had either been separated from adult family members with whom they had crossed the border or were the children of teenage mothers who were also detained there. Some of the minors had been detained there for nearly a month.

[Read about the children held in unsanitary and overcrowded conditions.]

The lawyers who visited the facility, first interviewed by The Associated Press and later by The New York Times, said that children lacked access to private bathrooms, soap, toothbrushes or toothpaste. Many were wearing the same dirty clothes that they had crossed the border in weeks earlier.

Widespread overcrowding in Border Patrol facilities has been documented recently in reports by the agency’s inspector general, but journalists and lawyers have been given little access to fenced-off facilities.

Some sick children had been quarantined in Clint, and the lawyers who traveled there were allowed to speak to those children by phone, but not in person.

Ms. Lopez-Sandoval said that only 30 children remain in Clint. The Border Patrol station there was meant to be temporary; children are supposed to be transferred out after 72 hours. But many had been languishing there because the Department of Health and Human Services’ shelters were full.


The strain on that system began to let up last week as a result of two changes: First, the Mexican government launched tougher efforts to limit the number of border crossers from Central America, under pressure from President Trump. Second, the Department of Health and Human Services scaled back a policy requiring fingerprints from family members who applied to sponsor children in its care, speeding up their release from government facilities. Many of those who apply to sponsor such children are undocumented themselves and unwilling to submit identifiers that could put them or their family members in danger of arrest and deportation.

A Department of Homeland Security official said that conditions in the tent facility in El Paso were much better than in Clint because the facility had been built especially for families, though it was not known whether the children had been given access to soap or showers since they arrived.

The official, who asked not to be identified because the person was not authorized to discuss the situation, said that the children would have been screened medically when they arrived in El Paso, though it was not yet clear if any had required hospitalization.

Ed. While it is great that public outcry led to the moving of some 300 children, on  any given time, for the past several weeks, more than 2,000 children have been held in the custody of US Border Patrol without their parents. Legally, they’re not supposed to be held by border agents for more than 72 hours before being sent to the Department of Health and Human Services, which is responsible for finding their nearest relative in the US to house them while their immigration cases are adjudicated.

In practice, they’re being held for days, sometimes weeks, in facilities without enough food or toothbrushes — going days without showering, overcrowded and undercared for. VOX, news.
Posted by Duane Campbell at 3:51 PM