There is No Wall in El Paso 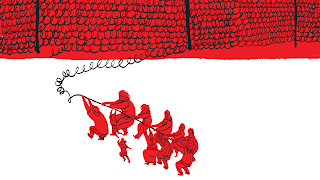 
People are fleeing once again. They are fleeing hunger,  and violence  and official corruption. It is important to separate  Immigration and Refugees.  They have different laws applying to them.

These migrants from are making their way north to the U.S. border to seek asylum, in search of  freedom from the poverty and violence that has been perpetuated by U.S. imperialism and neoliberal capitalism.

Those eligible for refugee status should be admitted as required by the 1951 Convention Relating to the Status of Migrants and the Universal Declaration of Human Rights  (1946) which the U.S. government helped to draft.   860,000 on back list.

Trump  claims  there is crisis of criminal gangs at the border.  Somewhat. But, not near what he claims.
The drug traffic at the border  is not caused by migration.  The drugs are brought in by gangs with trucks and tunnels. A wall will not stop the traffic.  It does need to be stopped.

The issue is the Wall. There is not a dispute about the need for more border enforcement and protection.  The conflict is will a wall make the difference.  Contrary to what he said, there is no wall in El Paso.  It is a fence.

A  Wall will not stop drug trafficking. It will not even slow it down.  The well-funded and increasingly sophisticated cartels are not going to be stopped by a wall.  The overwhelming majority of illicit traffic flows through ports of entry—not in the vast stretches of land in between where any wall would be built.
Refugees are not the source of drugs.  There is a failure of drug enforcement.


El Paso was never considered one of the most dangerous cities in the United States. It’s actually had low violent crime rates for decades — long before the US Army Corps of Engineers began to build a steel fence along the Rio Grande in 2009.
The El Paso Times took a close look at the crime data in January, after Texas Attorney General Ken Paxton first claimed that the border city had a high crime rate before the fence was constructed.
The fence, therefore, played no role in lowering violent crime in El Paso. In fact, violent crime in the El Paso increased by 17 percent from 2006 to 2011. Contractors began building the 57-mile fence in 2008 and finished in 2009. Even then, in 2010, El Paso’s violent crime rate was among the lowest in the country for a city of its size.

Posted by Duane Campbell at 8:36 PM