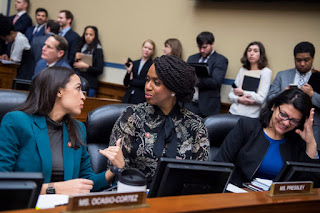 Four progressive House freshman announced Thursday that will vote no on a border deal that would avert a government shutdown. The rejected the bill as supporting “abusive agencies” and “hateful policies, priorities, and rhetoric.”
Reps. Alexandria Ocasio-Cortez (D-NY), Ilhan Omar (D-MN), Ayanna Pressley (D-MA), and Rashida Tlaib (D-MI) announced their opposition to the bill in a joint statement Thursday. The bill is expected to pass both chambers later Thursday.
The House progressives took issue specifically for its provisions that increase funding for U.S. Customs and Border Protection, for Immigration and Customs Enforcement, as well as the bills allocation for spending on a 55-mile border fence and an increase in detention beds.
“By any reasonable measure, Donald Trump’s weaponization of ICE and CBP has been a failure. The Department of Homeland Security does not deserve an increase in funding, and that is why we intend to vote no on this funding package,” the statement said.
“We want to be abundantly clear: this is not a rebuke of federal workers or those who depend on the services they provide, but a rejection of the hateful policies, priorities, and rhetoric of the Trump Administration,” the statement said.
Posted by Duane Campbell at 11:43 AM