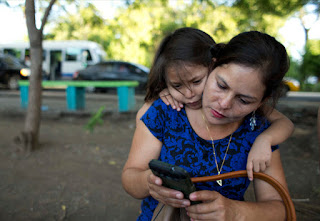 The Trump administration is apparently considering a reboot of its least popular immigration policy: the widespread separation of families who cross the US-Mexico border.
According to the Washington Post, senior administration officials are discussing a policy that would keep families in detention for a few weeks, and then force them to make a choice: to stay in detention for the months or years it takes for their cases to be resolved (and waive their rights under the Flores court settlement, which prevents the administration from keeping children in immigration detention indefinitely), or agree to be separated so that the child can go to the less restrictive custody of Health and Human Services. (They would also have the implicit option to give up on their asylum cases and agree to imminent deportation.)
While the Trump administration’s last effort at family separation was put on hold after massive political blowback, first by an executive order from Trump and then with a legal injunction from a federal judge, courts and the American Civil Liberties Union have agreed with the administration that it would be legal to force families to choose between detention and separation, as long as they had the choice.
But that doesn’t really explain why the administration is contemplating doing this. It appears to contradict the administration’s own plans to indefinitely detain all families through a change in regulation. It ignores evidence that shows, uniformly, that harsh treatment isn’t deterring families from seeking asylum. And politically, it refocuses attention to the biggest scandal Trump has faced on his signature issue.

The initial justification for family separation was that the administration was trying to end “catch and release” — apprehending families who’d illegally crossed the US-Mexico border, giving them court dates, and then allowing them to live in the US while their cases were pending.


Trump officials said that since the 1997 Flores court settlement (as interpreted under the Obama administration) barred them from keeping children in immigration detention with their parents for the months or years a case might take, they had to separate the family — keeping the parents in detention while the children were sent to HHS as “unaccompanied alien children.”
In a June ruling in the case Ms. L vs. ICE, Judge Dana Sabraw declared that this wasn’t an acceptable explanation and barred the Trump administration from forcibly separating families.
But both Sabraw and Judge Dolly Gee, overseeing the Flores settlement, said they weren’t forcing the government to release families. Both agreed the government could give families a choice between waiving their Flores rights (and staying in detention) and waiving their Ms. L rights (and being separated).
Vox
Posted by Duane Campbell at 4:44 PM