Unstable Trump Creates Another "Crisis" on the Border 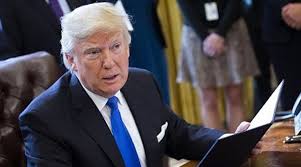 By Duane Campbell
President Donald Trump announced on April 3, 2018 that he'll deploy troops to the U.S.-Mexico border pending completion of a border wall and implementation of stricter security measures. https://www.nytimes.com/2018/04/02/world/americas/caravans-migrants-mexico-trump.html
As we explained in 2017, the Trump administration is being reckless and poorly informed in matters of foreign policy and immigration issues. To resist we need to know several things about Mexico and migration.  Building Trump’s wall and trying to make Mexico pay for the wall built on U.S. land was a belligerent act championed in the Trump campaign.   This poorly informed effort ignores many of the realities of the U.S.-Mexico relationship.  Mexico provides the primary security against migration to the U.S. on our southern border.  Mexican police and military restrict migration and turn thousands of would-be migrants back each year.
These poorly informed decisions are the kind we get since when we have President who  listens to Fox News rather than to rely upon persons who know the region and the issues. 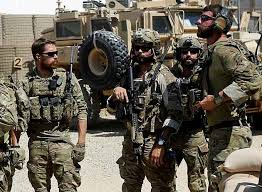 The Mexican army and police also provide the primary obstacle to migrants from Honduras, El Salvador and Guatemala from reaching the U.S. border.  The U.S. pays the Mexican forces to do this enforcement.  Given Trump’s provocative statements and acts, they could simply stop serving as a border security force for the U.S. The end of bi-national police cooperation would massively increase immigration and severely reduce efforts to restrict drug cartels from moving drugs into the U.S.  Update
https://www.nytimes.com/2018/04/04/world/americas/mexico-trump-caravan.html


The Mexican political system and the police are corrupt, but the situation could get much worse.  The Mexican legislature is already considering several bills to prevent Mexico from cooperating with the Trump surge in deportations.  Readers should know that the Mexican presidency is up for election in 2018, and the current dominant party (PRI) is in disgrace, in part because it is seen as subservient to the Trump administration.  Nationalism and resisting Yankee interference is a potent political force in Mexico and a left populist – Manuel Lopez Obrador – is currently far ahead in the polls. 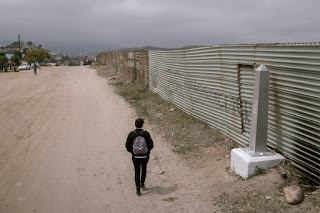 Trump’s demand to build the wall and to impose tariffs is producing a reaction in Mexico.   The U.S. not only imports from Mexico, U.S. corporations also exported to Mexico $267 billion dollars worth of goods in 2015. Mexico is the U.S.’s second largest export market.  A tariff on the U.S. side will likely produce a tariff on the Mexican side that could cost some 1 million jobs in the U.S.
Arturo Rodriguez, President of the United Farmworkers union (UFW) asks, “Since some 50 % of agricultural labor in California, Florida and Texas is undocumented, when they arrest all of these workers, who is going to feed the nation?”  The answer to his question is, if the border is closed and mass arrests make workers not available, most vegetable production will move to Mexico and to other countries.  Is that progress?

April 2018.
MILITARY ON THE BORDER: President Donald Trump announced Tuesday that he'll deploy troops to the U.S.-Mexico border pending completion of a border wall and implementation of stricter security measures, POLITICO's Louis Nelson and Cristiano Lima report. "We are going to be guarding our border with our military. That's a big step," Trump said at a White House press conference with the leaders of Estonia, Latvia and Lithuania. "We cannot have people flowing into our country illegally, disappearing and, by the way, never showing up for court."
The president offered scant details about the plan, but the idea of sending military to the border isn't new. President George W. Bush ordered 6,000 National Guard troops to assist with border enforcement in 2006, a move meant to provide support for the Border Patrol while the agency ramped up personnel and technology over several years. President Barack Obama followed suit in 2010, sending 1,200 troops to the southwest border, where they assisted with surveillance. "It is the right thing to address this situation as early as possible," said David Aguilar, former acting commissioner of U.S. Customs and Border Protection during the Obama administration, "when it's recognized that the problem is building up."
But is the problem building up? Border crossings reached an historic low in 2017 - the result of a steep drop between November 2016 and April 2017.Crossings began to rise again in May, and by February Border Patrol was making roughly 27,000 arrests, a 42 percent increase over the same month a year earlier. But arrest levels remain well below the peaks experienced in previous decades. In February 2008, the agency nabbed more than 73,000 people at the border, and a in February 2000, it arrested more than 211,000. A Homeland Security Department report released in September found the southwest border "is more difficult to illegally cross today than ever before."
The focal point of Trump's ire over the past several days was a much-publicized caravan of roughly 1,000 migrants headed north from Honduras and elsewhere, but by Tuesday its numbers were dwindling. "I've been advised by Mexican officials that the caravan is dissipating," DHS Secretary Kirstjen Nielsen tweeted Tuesday evening. "GOM [i.e., the government of Mexico] has repatriated several hundred participants to Central America and is offering refugee status to others who qualify. I thank the GOM for their partnership on this and other security issues." But Trump - still driven to build a wall on the southern border and with little else on his party's agenda until the midterm elections - will likely keep insisting the southern border is vulnerable, whether there's plausible evidence for that claim or not. Read more from POLITICO here.


TRUMP CALLS UP NATIONAL GUARD: President Donald Trump took steps Wednesday to send National Guard troops to the U.S.-Mexico border - the latest salvo in his immigration crackdown. The president issued a directive Wednesday evening that orders the Defense Department to support efforts to stop the flow of drugs, gang members, and undocumented immigrants into the country.
The use of National Guard members will require approval from state governors. Trump doesn't specify how many troops should be deployed, or what tasks they should be assigned. Homeland Security Secretary Kirstjen Nielsen said earlier Wednesday that plans were still being finalized, but that troops could be sent to the border by evening. She declined to comment on the cost of the undertaking, but said "past numbers should be indicative."

BTW. The drug gangs that he uses to create fear like MS-13, were created in the U.S.

Posted by Duane Campbell at 3:10 PM