New York Times.
LOS ANGELES — Top Democratic lawmakers in California are moving to enact sweeping legislation to protect undocumented immigrants from deportation, the first sign of what they say will be an effort to resist immigration policies championed by President-elect Donald J. Trump.

The measures, which will be introduced Monday, would provide free legal help to undocumented immigrants during deportation proceedings, offer more assistance in criminal court, and further limit local law enforcement’s cooperation with federal immigration agents. The measures contrast sharply with the kind of policies that Mr. Trump pressed on the campaign trail.

“Throughout the presidential campaign and since, the president-elect has made many troubling statements that run counter to the principles that define California today,” said Kevin de León, the Senate president pro tempore, who is backing the package. “There is no greater policy area than immigration where the comments run headlong to the values we share as Californians.”

The legislation suggests the level of opposition Mr. Trump may face in California, a state where 40 percent of the population is Latino. The leaders of both chambers of the Legislature are Latino, as is the state’s attorney general-designee, Xavier Becerra. Mr. de León said that pushing immigration measures would be a priority of the Legislature.

The bills are likely to pass, as both the chambers of California’s Legislature, as well as the governor’s office, are controlled by Democrats. The measures are the latest in a long line of immigrant-friendly policies passed by the Legislature, whose members include a number of immigrants and the children of immigrants. The state already offers in-state college tuition rates and driver’s licenses for undocumented immigrants.


This year, legislators approved a plan to press the Obama administration to allow undocumented immigrants to buy health insurance through the state’s public exchange. The proposed legislation goes even further in offering assistance to undocumented immigrants. Under one proposal, the state would set up a public fund to pay for legal services for any immigrant in deportation proceedings.

The fund would mostly use grants to finance nonprofits that offer such services. The public fund would also take donations, and Mr. de León said he had already spoken to some who are eager to make contributions. Jeff Adachi, the San Francisco public defender, has also proposed setting aside $5 million from the city’s budget to defend undocumented immigrants.Photo 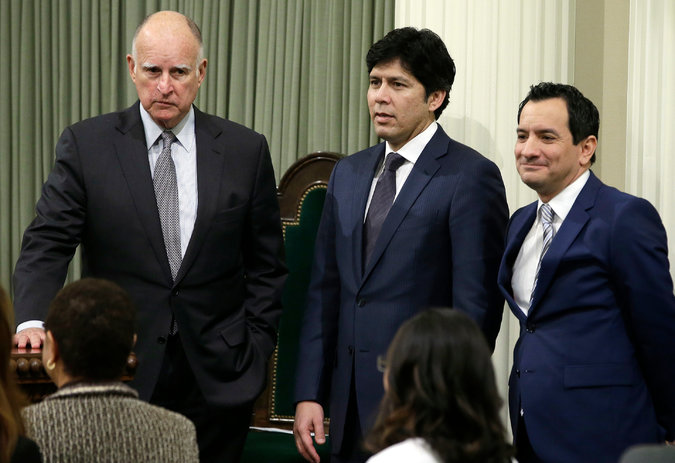 From left, Gov. Jerry Brown, Senate president pro tempore Kevin de León and Assembly Speaker Anthony Rendon at the Capitol in Sacramento in March. The proposed bills are expected to pass, as both chambers of the Legislature and the governor’s office are controlled by Democrats. CreditRich Pedroncelli/Associated Press

About two-thirds of all detained immigrants in California do not have lawyers, and several studies have shown that immigrants with a lawyer are far more likely to succeed in challenging their deportation.

In the past two years, the state has spent $33 million on legal assistance for immigrants. Much of the money was intended to help more immigrants enroll in an program created by President Obama that would have allowed them to legally work in the United States. The program, known as Deferred Action for Parents of Americans and Lawful Permanent Residents, or DAPA, was blocked after a Supreme Court ruling this year. The money has also been used to help legal permanent residents apply for citizenship.

Another proposal would set up facilities throughout the state to train public defenders in immigration law. The public defenders would be better able to help immigrants understand what impact their criminal offenses might have on their deportation case, Mr. de León said.

Mr. Trump has said he will focus on deporting criminals, but has also said he intends to immediately deport two million to three million immigrants. About 820,000 undocumented immigrants have been convicted of crimes, according to the Migration Policy Institute, a nonpartisan research group.

“If the president-elect has identified two to three million criminal immigrants, we can only assume it’s a pretense to open up criteria to deport mothers who are pulled over for a broken taillight,” Mr. de León said. “We want to ensure that those facing deportation are afforded due process, so that the most vulnerable are protected.”

A 2014 state law prohibits local jails from holding immigrants any longer than required by criminal law, with exceptions for violent and other serious crimes. Most counties in California also prohibit holding immigrants beyond their sentence unless federal immigration agents have a judicial order. The new law would go even further and prohibit all state and local law enforcement agencies from responding to requests from immigration authorities.

“The state is taking concrete steps to protect its residents, including by making sure its resources and personnel are not being used to deport its residents,” said Jessica Karp Bansal, the litigation director for the National Day Laborer Organizing Network, which has advocated these policies. “These are broad first steps to address the threats that are already out there.”

Mr. de León said the bills would be voted on next month. They will require a two-thirds majority to be enacted.
From: New York Times.  December 4, 2016
Posted by Duane Campbell at 7:59 PM