Why the GOP is Hesitant to Denounce Trump's Bigotry

Why the GOP is Hesitant to Denounce Trump’s Bigotry
Posted on July 5, 2015 by Jimmy Franco Sr.

The recent campaign statements made by Republican presidential candidate Donald Trump that “Mexican immigrants are primarily “criminals, drug smugglers and rapists” have generated a much needed political debate. This present controversy and national dialogue related to Trump’s bigoted campaign comments and particularly his racial slurs aimed at Mexican immigrants and Mexican-Americans have done the country a service by bringing his white chauvinist views and those of others in his party out into the open rather than hypocritically keeping them hidden below the surface. The broad public can now clearly see and hear the ugly ethnic hatred and policies of divisiveness that are firmlyingrained within the Republican Party and privately held by many of its members as well as the support shown for them by certain sectors of the conservative media. Trump has promoted and fiercely defended this poisonous and traditional US ideological trend of xenophobia, race baiting and immigrant bashing which has deep historical roots within our society. His comments have quickly raised his poll numbers among large numbers of Republicans and broadened his conservative appeal to rapidly become the second ranked GOP contender behind front runner Jeb Bush.
Even Ted Cruz, who is of Cuban descent and the representative of the reactionary tea-party wing of the GOP, has endorsed Trump’s hateful message and position as being “terrific”. If Trump’s racial slurs had been made against Jews or African-Americans, all of the key politicians and mainstream media would be going out of their way to denounce such views and demand a retraction and public apology. Yet, somehow, Mexicans are viewed as vulnerable and fair political game as these attacks have been given a silent pass by many apologists and rationalized as ‘appropriate’ by the right-wing media and politicians. Reacting to this embarrassing incident, a Republican strategist working with one of the other candidates characterized Trump’s divisive candidacy and bigoted public statements as “like a bad toothache that won’t go away”. However, the root of this poisonous and ingrained ideological toothache quietly resides deep within the Republican Party with its inherent and widespread support of white supremacy and sectarian policies which promote ethnic strife and exclusion. What Trump has done is to finally expose and bring this decaying racial toothache out of the GOP closet and into the open for the public to judge.

Trump represents the extreme Right-wing sector of the GOP
For almost three weeks there has been a deafening silence combined with just slight murmurs of dissent by Trump’s fellow Republicans who have opportunistically refused to publicly and firmly denounce his views. This was a part of their cover-up strategy which entailed merely keeping quiet and downplaying this ‘unfortunate’ controversy in the hope that it would quickly die down and that Trump would fizzle out. However, the opposite has happened as 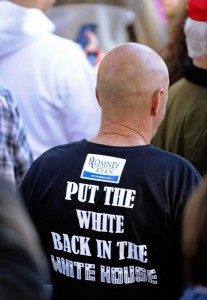 A Mitt Romney Republican supporter, this is the base Trump is appealing to.
Trump’s successful appeal to a wide range of receptive Republican voters has quickly spiraled him up the polls to become the runner-up to Jeb Bush. The Republican candidates took an unprincipled stand by remaining silent for many weeks and ignoring Trump’s comments. What they should have done was to quickly respond to these slurs and make an honest effort to root out these traditional racist views from our society by publicly repudiating its supporters. As the weeks passed and public criticism of Trump increased, Jeb Bush whose wife is Mexican finally gave a weak statement that Trump’s views are merely “wrong”, while Cuban-American Marco Rubio conveniently kept quiet for over two weeks before finally distancing himself from Trump’s comments. All of the Republican candidates have finally realized that Trump is not going away as they had hoped he would as he is now dominating the Republican presidential campaign while his GOP base is continuing to grow. By keeping their rebuttals low key, these GOP candidates are trying to not directly criticize and alienate Trump’s backward supporters as they hope to eventually win over these voters to their campaigns. The only Republican who has had the moral courage and decency to promptly speak up and denounce Trump’s hate mongering is George Pataki the ex-governor of New York who was quickly bashed by Donald and the far-right Fox News crowd. Pataki is now circulating a petition to denounce Trump’s remarks titled “Stand up to Trump” and is asking all Republicans to sign it, but which has been ignored by them so far. Trump’s strategy and actions are aimed at winning over the extreme right-wing votes and support of the tea party sector within the Republican Party represented by Ted Cruz and Rick Santorum. Beyond this sector, Trump’s demagogic views are also strategically geared to broaden his demographic appeal to the simmering anger and fears of older, religious and white blue-collar voters living within the rural areas of the country. His xenophobic and immigrant bashing political message is that the GOP represents the defense of a diminishing white majority whose traditional rights and culture are being eroded by the growth of ethnic minorities and is even packaged to appeal to a broader reactionary sector on the political right which includes the Minutemen and other white supremacist groups who will further promote his bigoted views which coincide with theirs. Viewed within a broader perspective, Trump is objectively a part of an international ideological trend represented by pro-fascist groups in Europe such as Britain First in England, the National Front in France, the Northern League in Italy and Pegida in Germany, all of whom collectively engage in hate speech and immigrant bashing in their respective countries.

Countering regressive forces with the formation of a center-left coalition
The Democrats also need to stand up even more forcefully and draw an ideological line and firmly denounce the hate-filled blather being uttered by Trump and the extreme right of his party. On the positive side, there is the development of a growing center-left coalition nationally which is in agreement with the progressive segment of the Democratic Party as a whole for some type of real immigration reform and for being more inclusive to Latinos. The Republicans have stated that they want to supposedly welcome 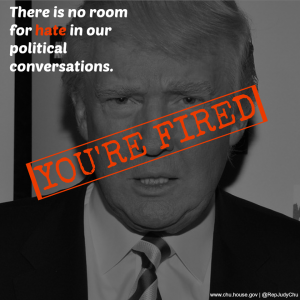 Those who hold Trump’s racially divisive views need to be exposed and criticized.
Latinos into their fold, yet, their true colors and the idiocy of their bigoted actions by Trump, Cruz and the lack of a timely and principled opposition to the immigrant bashing of Mexicans by the rest of their party directly contradicts their flowery and dishonest proclamations. These ongoing racial policies and ethnic bashing by elements of the GOP are merely driving Latinos into the broader and more inclusive center-left coalition which includes the moderate Hillary Clinton, but which in reality is being strongly driven by the progressive and concrete political platform being disseminated by the campaign of Socialist Bernie Sanders. Presently, two principal and contending political forces are developing within the country. One consists of the center to far-right Republicans who are primarily anchored and held hostage by conservative voters and their tea party faction and leaders such as Trump and Ted Cruz, and in opposition, the growing center-left forces which include labor, minorities, women and educated multi-ethnic millennials residing within the urban areas. This increasing ideological and political polarization which is taking place across the country is being aided by Donald Trump and his cohorts and is actually a positive development as it draws firm lines of demarcation between differing sets of world outlooks, principles and political policies. Trump’s views which are entrenched within the ideological fabric of the GOP are making this political line of demarcation much clearer to the broader public. The hate-filled propaganda and blatant ethnic divisiveness generated by Trump and other Republicans such as Ted Cruz actually contain an element of honesty as they reflect the real ideological stance and policies of a large segment of the GOP and this is forcing people to firmly take a position, speak up and act, just as the lyrics of the old labor song “which side are you on” urged people to do.

Latinos allied with a center-left coalition need to act and denounce Trump
Trump is not an isolated and obnoxious clown to be simply ignored and dismissed as he represents the tip of a large right-wing iceberg that is slowly melting, but which is still quite formidable and dangerous. He is stating what many backward groups and large numbers of misinformed people within the country still believe to be true. A couple of weeks ago white supremacist Dylann Roof who was motivated by racist hate speech which he had heard on right-wing blogs brutally murdered a number of African-American

Immigrant bashing and racial hatred must be countered with ethnic tolerance and united action.
parishioners at a North Carolina church. While their actions are completely different, the hate speech mouthed by Trump and that heard by Dylann Roof on fascist media blogs are essentially the same line of racist propaganda which can ultimately lead to violent acts by others. This message of racial hate and immigrant bashing by Trump who is now the second highest ranking Republican candidate is both polarizing and dangerous and needs to be thoroughly repudiated and rejected by the spineless GOP. Since Republicans don’t have the moral courage to admit that this poisonous and deeply ingrained presence exists within their party, then, they need to be exposed and heavily criticized and pressured to sever this toxic ideology from their ranks just as they were criticized for continuing to support the Confederate flag in many southern states. Caving in to the recent wave of public criticism, Republican candidates Bush, Rubio and Perry are now scrambling to clean up the bigoted GOP mess created by Trump and distance themselves from his views. Trump did us a favor by ripping off the nice veneer that was camouflaging the racism and hatred that is still firmly rooted within his party and in society. All of us need to draw a clear line between those of us on one side who uphold decency, tolerance and unity, and those on the other side who still uphold ethnic hatred and racial divisiveness which is defended by their apologists within certain parts of the media. If we want to put an end to anti-Latino attacks such as those mouthed by Trump, then, we must take a stand, speak up in unison and criticize these views as well as the recent silence and lack of courage exhibited by the shameless Republicans. In conjunction with this, anything to do with Trump or his products need to be rejected and boycotted. It is time to build a new USA and not cling to the present nor return to the past. It’s time to dump the Trump and the rest of the political dinosaurs!

Posted by Duane Campbell at 1:01 PM