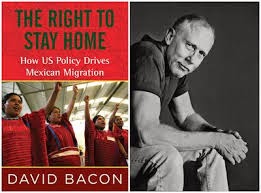 A review. by Duane Campbell
The Right to Stay Home: How US Policy Drives Mexican Migration by David Bacon  is a well written, well informed book that explains political and economic currents shaping the US immigration experience.
The U.S. public is  engaged  in a sustained and divisive debate over immigration. Unfortunately, at the same  time ,  most U.S. do not recognize that U.S. economic policy,  particularly NAFTA created many of  the conditions that produce the very immigration of some 8 million people  that many on the Right and the Tea Party   so oppose.
The passage of the North American Free Trade Agreement (NAFTA) in 1994 accelerated a neo-liberal form of economic growth in Mexico that drove poor farmers, particularly in the indigenous south to lose their farms and their livelihood.  In  response  young men, and increasingly the young women,  made the dangerous trek to the U.S. in search of work and an income to feed their families and keep their families from losing their  farms.


The 1994 NAFTA treaty  contributed to the mass migration of working people to the U.S.  Now the Trans Pacific Partnership (TPP) proposed  by the Obama Administration, continues these policies and includes many similar provisions.  If agreed to by Congress,  the T.P.P. , like NAFTA before it,  will increase immigration for decades. These  trade agreements are being written with the participation of  corporations but do not include realistic provisions for the protection of labor and migrants rights.
In The Right to Stay Home, David Bacon writes clearly and persuasively providing the reader with the an understanding of the geography and the economics of the current  mass migration.   The author is a well known  photo journalist and  photography is  usually an integral  element of his work.  In this  book, without photos, he uses extensive personal testimonies and narratives  of migrants  to carry the stories of working people caught up in the  struggle of human migration.
Bacon  describes how U.S. economic policy drives Mexican migration with a revealing and well documented  description of  how  the U.S. corporation Smithfield Foods created factory farms and an ecological disaster in the Perote Valley near Vera Cruz, Mexico.  In his narrative, Miguel Huerta describes how the  mass production of pigs created immense factory farms,  polluted the local water supplies,  drove local  farmers from their land, and  created  the vast pools of pig excrement  produced by concentrated  industrial pig sheds .  These polluted  factory farms were the origins of the Swine flue before it spread to the U.S., or as some prefer to refer to the epidemic as  H1N1.
Highlights of the book include  individual  and well written personal  narratives  of working people such as David Ceja and Fausto Limon as they try to survive   in the dangerous and exploitive  life of migration.  In an ironic twist  immigrant workers  like Roberto Ortega were driven off their land  and then   recruited from Vera Cruz  to migrate  work at Smithfield  hog plants in North Carolina.
These narratives  separate the Right to Stay Home from  social science and policy studies  on migration.
Bacon records  Jacinto Martinez  telling his own story of how he was  driven from the mines in Cananea, near the Arizona border when their union was destroyed by government intervention to protect the company.   He tells the story of  Humberto Montes de Oca, the elected leader of the the democratic Mexican electrical workers union ( SME) driven into exile in the U.S. and Canada by the selling off of power companies in pursuit of neo- liberal reform.
These workers and millions more were not voluntary migrants,   they came to the U.S. because they were forced from their jobs in Mexico by the neo-liberal economic “reforms” negotiated  within   NAFTA.
Globalization and global economic policy and trade deals  produce migration.  Even the conservative Catholic Church recognizes that when there is globalization there will also  be migration.  You would think that the U.S. Congress might catch up- unless Congress  is under the control of political groups that benefit from the continued “ illegal” status of millions of workers.
Just as the U.S. and many industrial countries have developed economic strategies to benefit from migration, they must also develop fair and just immigration policies or face  economic disruptions and a continued influx of migrant  workers.
David Bacon as a labor journalist has spent over thirty years chronicling  and photographing the lives of migrants .  He  is one of the few well informed  writers who considers  migration not only from the U.S. perspective but  from both sides of the border.
Immigrants’ rights, or The Right to Stay Home, has become a social movement in Mexico and among some immigrant workers’ organizations  in the U.S.  The Obama Administration has produced  vast expansion of deportations  reaching 409,000 last year, with over 2 million deported since this president assumed office. Increased enforcement has been  justified  as a device to encourage legislative reform of the immigration system, but it has  only increased  the deportations and the divisions of families.
Here in the U.S. we marvel at how technology has crossed borders for our benefit. In the same period  we have also  criminalized  the crossing of borders by  people. NAFTA, along with neo-liberal economic reform in Mexico and political repression including   crushing unions , has propelled thousands of additional workers to leave their homes and to come to the U.S.
As it has done for at various times in the last 120 years, migration goes over/ under and around  border, fences and walls.  One response of unions is cross border organizing. Bacon describes  several of the historical incidents  of cross border organizing- going back to the Cananea strikers and the Western Mine workers in 1906 and again in 2007.  Again today  experienced and dedicated  union organizers facing repression in Mexico  bring their  working class perspective to the U.S.  and contribute to the  political organizing demanding immigration reform here.  Cooperative and solidarity based organizing has increased  as the borders are surpassed.
This is a well researched book, well worth reading by persons interested in this conditions of labor and immigration on both sides of the border.
See a video of David Bacon describing this issue in  October, 2013.