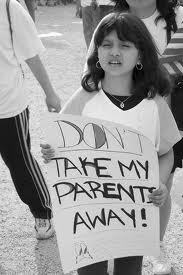 The many grassroots organizations across the U.S. who stand behind the Dignity Campaign (www.dignitycampaign.org) have worked tirelessly for immigration reform based on human, civil and worker's rights of immigrants, especially those who are undocumented. Senate Bill 744 is not the immigration reform we seek. S. 744 is a corporate boondoggle that will be a civil rights disaster for immigrant communities.

This bill holds the limited legalization program hostage to the further advancement of the security state, by doubling the number of Border Patrol agents, and spending an incredible $50 billion to build a double wall on the US/Mexico border, and deploy more drones and other tools of electronic warfare in border communities. S.744's beneficiaries are a very narrow class of elite contractors in the "security" and surveillance industries (like Bechtel), privatized prison corporations (like Geo Corporation), and corporate-scale agriculture, and technology giants striving to keep wages as low as possible through the expansion of guest worker programs. S. 744 accomplishes this by moving away from family-based immigration to an employment-based system.


How can the Senate justify spending billions on enforcement, while Chicago's schools close and Philadelphia teachers lose their jobs to extreme budget cuts? S. 744 is a disaster not just for people living in border communities, but for the whole country.

The legalization of 11 million people without documents should be the bill's paramount purpose, especially with 400,000 deportations a year, thousands of firings, and no end in sight. But the CBO (Congressional Budget Office) estimates that only 60 percent of applicants will survive the gauntlet to citizenship. Others estimate that only 40% of applicants will make it. Restrictions will divide the 11 million undocumented into those who can meet its punitive requirements and those who won't. Millions of the lowest-income migrants will be shut out by income requirements and will be at risk of deportation by enhanced E-Verify and the continuation of Homeland Security's 287g and Secure Communities programs. Even some of the more favorable portions of the bill, such as the 5-year path to legalization for agricultural workers, is a Trojan Horse. It requires immigrants to be tethered to the harsh, poor-paying agricultural industry for 5 additional years.

The strategy of trading some legalization for increased border and interior enforcement and guest worker programs has led the immigrant rights movement to the current disastrous situation. This 'compromise' strategy has failed to produce progressive immigration reform since it was first unveiled a decade ago. What we have instead is the worst enforcement-heavy bill that we have ever seen.

We reject further movement down this road. The horse trading and "compromises" are not a solution to the broken immigration system, much less the global economic domination of the big fish over the small fish that is at the core of the mass migrations of 240 million displaced people.

We support Congressman Filemon Vela's strong and principled stand in resigning from the Congressional Hispanic Caucus to protest its endorsement of the border enforcement provisions of S. 744. As a representative of a border district, he knows well the devastating impact that current enforcement programs already have.

It is past time for those Senators and Congress members who share Congressman Vela's outrage to take a stand themselves. It is also time for immigrant advocates to look at alternative proposals for progressive immigration reform and build the social movement that will win them. Alternatives that reflect a better understanding of global economics and human rights have been proposed many times by migrant communities, their allies, people of faith and unions.

We say YES to legalization without chains with a quick path to citizenship.
We say NO to expanded guest worker programs that create a two-tiered society,
We say NO to the continued criminalization of immigrants and militarization of the border.

With the bill moving to the House, we urge immigrants and immigrant rights activists to continue pressing for the immigration reform you want and to push back against the proposals you don't want. Whether or not S. 744 or some version like it -- or worse -- passes continue to organize for any and all eventualities.