Plan for March on Washington. 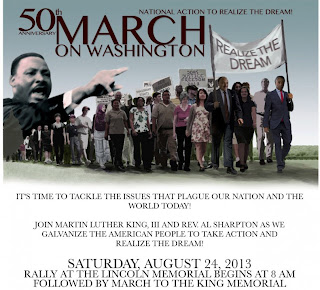 Meteor Blades, Daily Kos
Some 15 civil rights leaders emerged from a 45-minute meeting at the White House Monday afternoon saying they were heartened by what they said was President Obama's commitment not to roll over in the face of the Supreme Court's 5-4 decision outrageous weakening the Voting Rights Act. Those in attendance included Attorney General Eric Holder and representatives of the National Action Network, NAACP, ACLU, National Council of La Raza, Asian American Legal Defense and Education Fund, and the National Urban League.

New York Times: WASHINGTON — Days after his administration filed suit against Texas to protect minority voters, President Obama told civil rights leaders and local officials on Monday that the federal government would vigorously enforce voting rights in the country despite a Supreme Court ruling against a core section of a landmark 1965 law, several participants said after a White House meeting.
“The president said that the Voting Rights Act is not dead, it’s not even critical, it’s just wounded,” said the Rev. Al Sharpton, the civil rights activist and MSNBC talk show host. “He was very reassuring,” Mr. Sharpton added.
Mr. Obama met with the group for about 40 minutes, and administration officials led by the attorney general, Eric H. Holder Jr., met with the group for a bit longer. The administration was addressing what Mr. Sharpton described as the civil rights community’s “alarm” over the court’s 5-to-4 vote last month. In that case, Shelby County v. Holder, the majority struck down as outdated and unnecessary the law’s language requiring that the federal government review and clear any changes in election laws in nine states, most of them in the South.

That fight has already begun. Eight of the 11 states of the Old Confederacy have passed or made moves in the direction of passing new voter restrictions since the Supreme Court handed down its decision. Last Thursday, Holder announced that the DOJ will seek a federal court ruling in Texas that creates a requirement for all changes in voting laws to be pre-cleared by the federal government under sections of the Voting Rights Act not wrecked by the Supreme Court's ruling. Holder said this first action by DOJ won't be the last and that he and his staff are "determined to use every tool at our disposal to stand against discrimination wherever it is found."
The civil rights leaders said they will march and rally in Washington, D.C., on Aug. 24, to commemorate the 50th anniversary of the March on Washington for Jobs and Freedom in 1963.
DSA’s planning for the March on Washington is here.
http://www.dsausa.org/50th_anniversary_march_on_washington

At a press conference after the White House meeting, Democratic Rep. Alan Williams of Florida said that Trayvon Martin, slain at age 17, would have been old enough to vote in 2014: “That’s very sacred and it’s not lost on us. We’re going to make sure that everyone has that opportunity.”

Posted by Duane Campbell at 7:56 PM